Tyson Fury’s WBC championship future hangs in the balance, Otto Wallin is waiting to pick up the scraps, the next fighter in a legendary lineage targets the UK and a Mexican superstar hints at the impossible. Just another week in the world of professional boxing. Here are five boxing stories you might have missed.

Will WBC Demand A Furious Farewell?

WBC President Mauricio Sulaiman has confirmed that his organisation will press heavyweight champion into a decision over his future. ‘The Gypsy King’ insists he has retired from boxing, and thus the future of the WBC belt around his waist comes into question.

“The WBC will be communicating with Tyson Fury and his promoters about his future plans in the coming week.”, Sulaiman told Sky Sports. “If he decides to retire the WBC will fully support him. It is our dream to see fighters retire with such greatness.”

There is a precedent for such support. Vitali Klitschko retired as WBC heavyweight champion in 2005. The governing body allotted him a “champion emeritus” designation, meaning he would automatically receive a title shot upon his return. He took up this option when defeating Samuel Peter for the title upon his 2008 return. If Fury is walking away, it seems likely WBC will put measures in place to ease his path to a return should he change his mind.

The WBC have not yet made their ruling on Fury, but 23-1 Swede Otto Wallin has already thrown his hat into the ring to fight for the vacant belt.

It’s quite an audacious shout considering the tall southpaw is only ranked 11th in the latest WBC heavyweight list. His trainer, Dmitry Salita, says his charge would relish a meeting with current number one Deontay Wilder. “If Tyson vacates the title, Otto is more than ready to fight Wilder for the title.”

It’s an admirable sentiment, but there are others far ahead of the former Fury foe in the queue. While Joe Joyce and Joseph Parker look set to fight each other, Wilder facing Andy Ruiz Jr, Frank Sanchez or Filip Hrgovic at this point would be far more attractive. 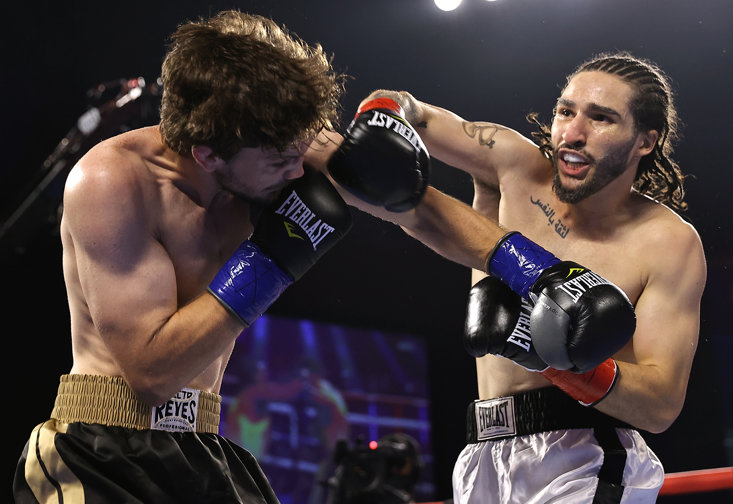 Muhammad Ali’s grandson, 5-0 prospect Nico Ali Walsh, wants to follow in the footsteps of ‘The Greatest’ and fight in the UK. Speaking to The Sportsman, ‘The Legend Lives On’ said “I have a mental goal. The UK is number one above all places in the world, because my grandfather loved the UK and they loved him. You have to see me fight in the UK”

Ali Walsh’s promoter, Bob Arum, echoed these sentiments while recalling his own past with the elder Ali in the same interview. “Ali meant so much to boxing in the UK. I was privileged to be part of so many of his fights in the UK. I can’t wait to bring Nico over there to fight before the greatest fans in the world. There’s great fans here in the United States, but there’s nothing like the boxing fans in the United Kingdom.”

‘Canelo’ vs Usyk Couldn’t Happen… Could It?

A fight that wasn’t on anybody’s radar could be set to happen, as Saul ‘Canelo’ Alvarez and the camp of Oleksandr Usyk hinted at a mega-fight this week.

The Mexican asked about the possibility of meeting Usyk at a catchweight of 201lbs, which would allowed the Ukrainian’s unified heavyweight titles to be on the line. “As a fighter, I don’t care; I fight whoever, anybody.” came the response. Not a ringing endorsement, but certainly not a denial.

Usyk’s camp certainly seems keen. The manager of‘ The Cat’, Egis Klimas said the following when asked about the heavyweight title showdown. “Be our guest, Usyk will make cruiserweight for this one, but let Canelo concentrate on Bivol for now”. Nobody is saying too much on this one, but the fact neither side has dismissed it out of hand is interesting. Watch this space.

After two canceled title fights with John Riel Casimero, Ellesmere Port’s Paul Butler has finally been elevated to the status of WBO champion.

The former IBF titlist was supposed to meet stripped champion Casimero last December, before the Filipino withdrew at the weigh-in due to gastritis. Their rescheduled bout fell apart due to a medical guideline violation for Casimero last month. Butler went on to win the WBO interim title against late replacement Jonas Sultan.

The WBO held a vote to decide the future of their two bantamweight champions. The delegates decided unanimously that Butler should be elevated to full championship status. A happy ending to the 33-year-old’s ordeal.

x
Suggested Searches:
The Sportsman
Manchester United
Liverpool
Manchester City
Premier League
More
boxing
Derek Chisora Returns: Five Boxing Stories You Might Have Missed...
Josh Taylor is eyeing an opponent that is not Jack Catterall, ‘Del Boy’ is set for a July [ ... ]
boxing
From Me To You And Then Bilbao: Rhiannon Dixon And James Moorcroft...
They are bickering like an old married couple even before the interview starts – Rhiannon Dixon's [ ... ]
boxing
One More Walk On The Wild Side: Deontay Wilder Might Not Be...
Former WBC heavyweight champion Deontay Wilder will be honoured with a life-size statue in his hometown [ ... ]
boxing
The Boy Who Would Be King: The Time Is Now For David Benavidez
Before his shock defeat at the gloved hands of Dmitry Bivol, there was one fight seemingly the whole [ ... ]
boxing
20 Years On: Remembering Micky Ward And Arturo Gatti's Exhilirating...
The word warrior is thrown around so readily in boxing, it has lost some of its impact. While every [ ... ]
boxing
The Fight Review: New Ali-Foreman Book Sees 'The Rumble' Through...
Some fights are just fights. Wiped away like the blood, sweat and tears that once stained the canvas [ ... ]
boxing
Undisputed No More: Do All Roads Lead To Jack Catterall For...
Josh Taylor has been stripped of the WBA super-lightweight championship. The Scot, who still holds the [ ... ]
boxing
Everything You Need To Know Ahead Of Joshua Buatsi Vs Craig...
We’re going to be treated to a south London derby in the capital this weekend when Joshua Buatsi [ ... ]
boxing
40 Years On From Larry Holmes Vs Gerry Cooney: ''Better In Our...
When a couple of heavyweight legends roll into town to reminisce about a classic fight from decades [ ... ]
boxing
Mike Tyson Charges Dropped: Five Boxing Story You Might Have...
‘Iron’ Mike Tyson can put his aeroplane nightmare behind him, there will be no President [ ... ]
boxing
Canelo Dethroned: Who Is Boxing's New Pound-For-Pound King?
Saul ‘Canelo’ Alvarez’s loss to Dmitry Bivol on Saturday ended not only his nine-year [ ... ]
boxing
Jermell Charlo And Brian Castano Battle To Become 7th Four-Belt...
This Saturday, Jermell Charlo and Brian Castano will fight to crown an undisputed light middleweight [ ... ]
boxing
Bouncing Back: Canelo Can Learn From Great Fighters Who Recovered...
Saul ‘Canelo’ Alvarez’s unanimous decision defeat to Dmitry Bivol last Saturday shocked [ ... ]
boxing
How To Watch The BOXXER Series Cruiserweight Tournament
The BOXXER Series returns this weekend with an eight-man cruiserweight installment. The spiritual successor [ ... ]
boxing
See No Bivol: Where Does Saul 'Canelo' Alvarez Go Next?
This is not the article you were supposed to be reading this Monday morning. Going into his fight with [ ... ]
boxing
Everything You Need To Know As Floyd Mayweather Takes On Former...
Floyd Mayweather returns to the ring this weekend when he takes on former sparring partner “Dangerous” [ ... ]
boxing
Straight Outta Sheffield: Kell Brook's Five Best Performances
Kell Brook is one of the standout British fighters of his era. The former IBF welterweight champion [ ... ]
boxing
Ranking Canelo’s Best Wins Ahead Of His Showdown With Dmitry...
From his professional debut in Mexico as a baby-faced 15-year-old to this weekend’s showdown with [ ... ]
boxing
Canelo Isn't Making History This Time, But Bivol Is A Top Drawer...
The impossible is just what Saul ‘Canelo’ Alvarez does at this point. A 20-0-1 professional [ ... ]
boxing
Cinco De Mayo: The Storied History Of Boxing's Favourite Holiday
Cinco de Mayo commemorates Mexico’s victory over the French Empire at the Battle of Puebla in [ ... ]
boxing
Great Expectations: Do We Expect Too Much From Saul 'Canelo'...
Saul ‘Canelo’ Alvarez is a victim of his own success. Like those that criticise Manchester [ ... ]
boxing
The Sportsman Boxing Power Rankings: May 2022
The Sportsman Boxing Power Rankings is a monthly series ranking boxers on a number of factors to determine [ ... ]
boxing
Show Of Strength: Historic Fight Weekend Proves Boxing Is In...
Jake Paul was at the centre of another huge boxing event, but this time he was in a suit and tie rather [ ... ]
boxing
Everything You Need To Know About Canelo Alvarez Vs Dmitry Bivol
Fresh from conquering the super-middleweight division, the great Saul ‘Canelo’ Alvarez returns [ ... ]
boxing
Katie Taylor And Shakur Stevenson Shine On An Incredible Night...
From the biggest women’s fight of all time in New York to a sublime performance from Shakur [ ... ]
boxing
Marvin Hagler, Mike Tyson And The Most Intimidating Boxers Of...
Boxing is littered with characters who are the masters of the dark art of intimidation. These fighters [ ... ]
boxing
Natasha Jonas Predicts Winner For Historic Katie Taylor vs Amanda...
This weekend for the first time in history, two women will headline a show at Madison Square Garden. [ ... ]
boxing
Why Women's Boxing Is Better At Making Super-Fights Than The...
The biggest fight of this incredible era of women’s boxing takes place this weekend as Katie Taylor [ ... ]
boxing
Jake Paul And Mike Tyson Interested In Fight: Five Boxing Stories...
Jake Paul vs Mike Tyson might be a genuine thing, Tyson Fury is still planning to drive off into the [ ... ]
boxing
Life Through A Lens: Legendary Photographer Neil Leifer On Ali,...
Imagine if you will, Muhammad Ali. Really take a second to picture ‘The Greatest’, the most [ ... ]