Boxing
News
The Mexican superstar has a plethora of options available to him after completing his conquest of the 168 pound titles
Joey Mills
13:35, 09 Nov 2021

“And when Alexander saw the breadth of his domain, he wept, for there were no more worlds to conquer” ~ Hans Gruber, Die Hard.

Alan Rickman’s character in the 1988 Christmas classic might not have been the first to utter this phrase, but it is his impeccable thespian delivery that comes to mind when the slogan is repeated. This is the situation undisputed super middleweight champion Saul ‘Canelo’ Alvarez finds himself in. He has completed his conquest of the 168 pound titles in emphatic fashion, stopping Caleb Plant to complete the set. But what now for the Mexican pound-for-pound king?

Despite picking up every significant belt at super middleweight, ‘Canelo’ has not quite cleared out his division. Unbeaten former two-time WBC champion David Benavidez currently sits top of The Ring rankings. Benavidez has never lost a title in the ring, and represents perhaps an even greater challenge than the three champions Alvarez has already dethroned. The big-punching 24-year-old has scored impressive stoppages over Anthony Dirrell, J’Leon Love and Ronald Gavril while compiling a 24-0 record. While ‘Canelo’ far outstrips him for experience, his CV and performance levels make him a worthy challenger should the Mexican remain in the division.

Due to the comprehensive nature of Alvarez’s dominance, there are few other standout options at super middleweight. There is the interesting prospect of renewed hostilities with former middleweight champion Daniel Jacobs, who ‘Canelo’ outpointed in a close fight in 2019. ‘The Golden Child’ has won two bouts since, and has the style to drag Alvarez into another tactical battle. The cagey nature of their first fight perhaps weakens the box office appeal of this match-up though.

In terms of rematches, a trilogy fight with Gennadiy Golovkin is a more intriguing prospect. The current IBF middleweight champion gave ‘Canelo’ two of his toughest nights in 2017 and 2018, with the Mexican having to walk through some brutal shots to clinch a draw and a win from their wars. A thrilling pair of fights, neither of which ended utterly decisively, it is easy to see the appetite for a threequel. 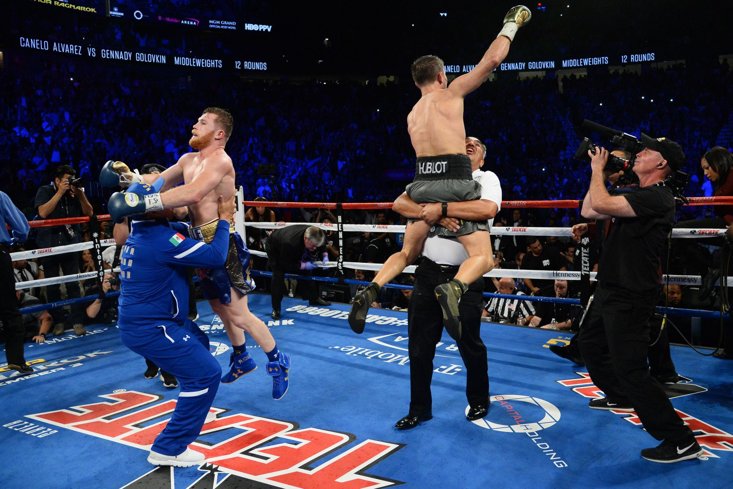 ‘Triple G’ has gone 3-0 since his last meeting with ‘Canelo’, and claimed a world title in the process, but at 39 he could be on the slide. He represents a smart pick for Alvarez. A chance to dominate your greatest rival once and for all, in what is sure to be a sizable box office attraction. First, Golovkin must come through a unification bout with WBA champion Ryoto Murata in December.

There are also opportunities to be had in a familiar division. In 2018, then-middleweight champion ‘Canelo’ ventured up to super middleweight for a one-off fight against Rocky Fielding. After picking up the Scouser’s WBA ‘regular’ championship, he returned to middleweight. At the time, most dismissed this as a box-ticking exercise. A chance to take the path of least resistance and pick up a belt, any belt, in another weight class. But as we now know, ‘Canelo’ would return to super middleweight on a permanent basis at a later date to unify the division.

The light heavyweight division was also subject to one of these fact-finding missions. In 2019, ‘Canelo’ won the WBO light heavyweight championship by stopping Sergey Kovalev in eleven rounds. The result netted Alvarez a world title in a fourth weight class, but there is every chance he will return to light heavyweight.

This perhaps represents the most difficult option for the great Mexican. The 175 pound division boasts Artur Beterbiev, the 16-0 WBC and IBF king who has won every fight by stoppage. Unbeaten Dmitry Bivol holds the WBA championship, as well as high-quality wins over Jean Pascal and Joe Smith Jr. The latter fighter is now the WBO titleholder, and is perhaps the most winnable fight should ‘Canelo’ move up. The American does boast power though, as seen when he ended the career of the legendary Bernard Hopkins, and more recently when wiping out Eleider Alvarez.

So there remains a few worlds for ‘Canelo’ to conquer. While he could retire tomorrow, comfortable in the knowledge he would be considered an all-time great, at 31 this is unlikely. Instead there will be more conquests, more historic battles and undoubtedly more world titles to come. This next chapter of the ‘Canelo’ story might just be the most exciting yet.

x
Suggested Searches:
Manchester United
Liverpool
Manchester City
Marcus Rashford
Premier League
More
boxing
Teofimo Lopez vs George Kambosos Jr Could Join The Great Lightweight...
Teofimo Lopez and George Kambosos Jr finally step into the ring on Saturday in a blockbuster lightweight [ ... ]
boxing
Joe Joyce In Talks To Face Pulev: Five Boxing Stories You Might...
Joe Joyce is set for a heavyweight showdown with a division veteran, Amir Khan versus Kell Brook is, [ ... ]
boxing
Rocky Fielding, Ohara Davies And Badou Jack Take To The Ring...
Super lightweight standout Ohara Davies returns to the ring on Friday in Dubai. He was originally scheduled [ ... ]
boxing
On This Day: Roberto Duran And The Unthinkable 'No Mas' Against...
Roberto Duran had hands of stone. He had won 71 of 72 fights in a blistering career. He had reigned [ ... ]
boxing
Joe Joyce Wants To Face Tyson Fury, But Dillian Whyte Won’t...
Joe Joyce has thrown his hat into the ring for a possible world heavyweight title clash with Tyson Fury. [ ... ]
boxing
The Top 10 British Heavyweights Of The Modern Era
British boxers have taken over the heavyweight division in recent years. WBC and lineal champion Tyson [ ... ]
boxing
After The Porter Slaughter, Terence Crawford MUST Fight Errol...
People told Terence Crawford that his record needed a world class welterweight in their prime, so he [ ... ]
boxing
Everything You Need To Know About Teofimo Lopez vs George Kambosos...
It has been a long, bizarre road but Teofimo Lopez will finally step in the ring with George Kambosos [ ... ]
boxing
Mike Tyson’s Destruction Of Trevor Berbick Is Still Stunning...
On this day 35 years ago, Mike Tyson became the youngest world heavyweight champion in history. He was [ ... ]
boxing
Everything You Need To Know About Demetrius Andrade Vs Jason...
Demetrius Andrade, perhaps the most avoided man in boxing, returns to the ring tonight. ‘Boo Boo’ [ ... ]
boxing
Terence Crawford vs Shawn Porter Is A Match Made In Heaven
Modern boxing is often criticised for providing fights that aren’t competitive on paper, mismatching [ ... ]
boxing
Is Canelo Cruising For A Bruising? Saul Alvarez Targets WBC...
In the wake of Saul ‘Canelo’ Alvarez beating Caleb Plant to become undisputed super middleweight [ ... ]
boxing
‘If You Can’t Kill Me, Then Forget It’: Richard Commey Is Ready...
Former IBF lightweight champion Richard Commey is in a confident mood as he prepares to face pound-for-pound [ ... ]
boxing
Everything You Need To Know As Riakporhe Headlines Weekend’s...
This weekend sees Richard Riakporhe headline a fascinating night of action on BOXXER’s Sky [ ... ]
boxing
Triller Announces Triad Combat: Triangular Rings, Hybrid Rules...
Triller have announced Triad Combat, a “revolutionary, combat team sport” that incorporates [ ... ]
boxing
Everything You Need To Know Ahead Of Terence Crawford Vs Shawn...
This weekend sees one of boxing’s pound-for-pound best fighters make his long-awaited return to [ ... ]
boxing
Remembering The Fight When Muhammad Ali Proved He Was Undeniably...
“The greatest Ali ever was as a fighter, was against Williams - that night, he was the most devastating [ ... ]
boxing
Ki-KO: Kid Galahad Stunned By Super Spaniard Martinez In IBF...
The dream has come true for Kiko Martinez. The Spanish veteran had been written off by critics, and [ ... ]
boxing
Heartbreak For Terri Harper As Alycia Baumgardner Dethrones...
Terri Harper was sensationally stopped in the fourth round by Alycia Baumgardner, losing the WBC super [ ... ]
boxing
On This Day: Holyfield And Bowe Kick Off The Greatest Heavyweight...
On this day in 1992, the greatest heavyweight trilogy of all-time kicked off. With all due respect to [ ... ]
boxing
''We'll See After This Fight'': Terence Crawford On Becoming...
WBO welterweight champion Terence Crawford returns to the ring next weekend, in a top-drawer match-up [ ... ]
boxing
Eubank Jr vs Williams Set For December: Five Boxing Stories...
There’s been some rumblings of a brand new Fight Night game heading our way, we've got an [ ... ]
boxing
Liam Williams Says He Would Maul Chris Eubank Jr If They Met...
An all-British middleweight showdown between Chris Eubank Jr and Liam Williams looks imminent, with [ ... ]
boxing
On This Day: Usyk Knocks Out Bellew In Britain’s First Glimpse...
Oleksandr Usyk’s dominant September WBA, IBF and WBO heavyweight title win over Anthony Joshua [ ... ]
boxing
Angry Anthony Joshua Wants To “Bash Usyk Up” In Rematch Says...
Eddie Hearn has given an update on Anthony Joshua’s hunt for a new trainer ahead of the Brit’s [ ... ]
boxing
Everything You Need To Know Ahead Of Kid Galahad Vs Kiko Martinez
Kid Galahad makes the first defence of his IBF featherweight strap this weekend when he takes on veteran [ ... ]
boxing
On This Day: 25-1 Underdog Evander Holyfield Shatters The Mike...
On this day in 1996, Mike Tyson did what he always did. The commentators read off a list of his quickest [ ... ]
boxing
On This Day: Joe Calzaghe Takes Well-Deserved Victory Lap Against...
On this day, we saw Joe Calzaghe take to the ring for the last time. Boxing is a cruel, unforgiving [ ... ]
boxing
So You Think You Know Canelo? Take Our Undisputed Saul Alvarez...
Saul 'Canelo' Alvarez takes on Caleb 'Sweethands' Plant on Saturday night, in a fight [ ... ]
boxing
Prelude To History: The Canelo-Plant Undercard Carries Intrigue
The undisputed super middleweight title battle between Saul ‘Canelo’ Alvarez and Caleb ‘Sweethands’ [ ... ]