Boxing
News
Before he dominated boxing for a decade, Wladimir Klitschko was pushed to the limit by Samuel Peter
Joey Mills
17:01, 06 Sep 2021

Former WBC heavyweight champion ‘The Nigerian Nightmare’ Samuel Peter turns 41 today. Despite holding a portion of the heavyweight crown, the sixth-round knockout of Oleg Maskaevwhich saw him claim the belt is not what Peter is best known for. Rather, the Uyo, Nigeria knockout artist is most famous for a fight he didn’t win. On 24 September 2005, Peter would knock down former and future world heavyweight champion Wladimir Klitschko three times on the way to losing a unanimous decision. This thrilling heavyweight humdinger would mark the last time Klitschko was knocked down in a fight for over 11 years, before Anthony Joshua sent him to the canvas in April 2017.

It is hard to put into words just how much Samuel Peter meant to boxing aficionados in the heavyweight nuclear winter of 2005. There was a vacuum at the top of boxing’s decaying banner division, with superstars declining or departing, and the heavyweight championship scattered to the wind. ‘Iron’ Mike Tyson had slumped into retirement after being stopped by Kevin McBridge in June. Lennox Lewis had retired as WBC and lineal champion a year before, while Evander Holyfield had been comprehensively beaten in his last three fights. The IBF strap was around the waist of the slick but light-hitting Chris ‘Rapid Fire Byrd’, the WBA belt was in possession of John Ruiz, the WBO bauble belonged to Lamon Brewster and the WBC championship would be vacated in two months’ time by the injured Vitali Klitschko. Shorn of stars, and with a fractured championship, heavyweight boxing was at its nadir.

Samuel Peter appeared to be the perfect tonic. An unblemished 24-0 record with 21 knockouts, had boxing hardcores salivating. His wins over fringe contenders Charles Shufford, Taurus Sykes and Jeremy Williams, coupled with his highlight reel of knockouts, had many touting him as the latest ‘Next Mike Tyson’. Peter faced a huge step-up in class however, when he signed to fight former WBO titleist Wladimir Klitschko. 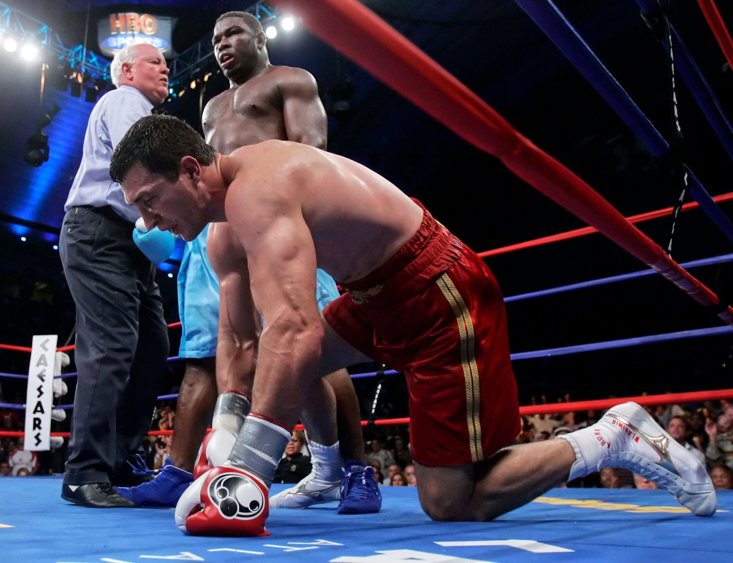 This was not quite the dominant ‘Dr Steelhammer’ we remember so vividly today. While he had held the WBO championship at this point, he had lost it via a chilling second-round TKO defeat to South African Corrie Sanders. Klitschko had also been stopped by Lamon Brewster while trying to regain the same belt, as well as suffering an early-career TKO loss to unheralded Ross Purrity. In 2005, Wladimir was a boxer in transition. He had racked up two wins since the chastening Brewster defeat, but DaVarryl Williamson had sent him to the canvas in the first of those. Klitschko entered the Peter fight as the underdog due to his opponent’s incredible power, and his own suspect chin.

The pair finally met in Atlantic City, New Jersey, in a fight that would define both their careers. Klitschko started fast, perhaps sensing that letting the concussive puncher establish his rhythm could be fatal. Working excellently behind a jab that would go on to dominate an entire division, Wladimir landed several warning shots with his right hand early on. Peter was undeterred, barreling forward looking for one big punch to turn the tide. In the fifth round he found it, twice. A pair of messy, wild hooks connected and on both occasions the Ukrainian fell to the canvas. An untidy fight from the get-go, with Klitschko initiating a lot of clinches, both punches seemed to catch Wladimir towards the back of his head. The referee awarded both as knockdowns though, and Klitschko’s dream redemption began to look like a ‘Nigerian Nightmare’.

The 6-foot-7 brother of Vitali held on for dear life, and tried to slow the pace in the following rounds, but found himself rocked in the eighth with a solid right hand. The tone and tenor of the fight were now set. Peter would storm ceaselessly forward attempting to uncork a knockout punch, while Klitschko peppered him with hard jabs and straight rights in a fruitless effort to stop him. Peter walked through fire time and again, shrugging at the sort of shots that would undo Klitschko’s next 19 opponents. The Ukrainian artillery was not enough to prevent another crisis in the 10th, as a crunching right hook sent Wladimir staggering across the squared circle. Peter followed it up with a straight right hand to send him down, and at this point the fight looked to be a formality. 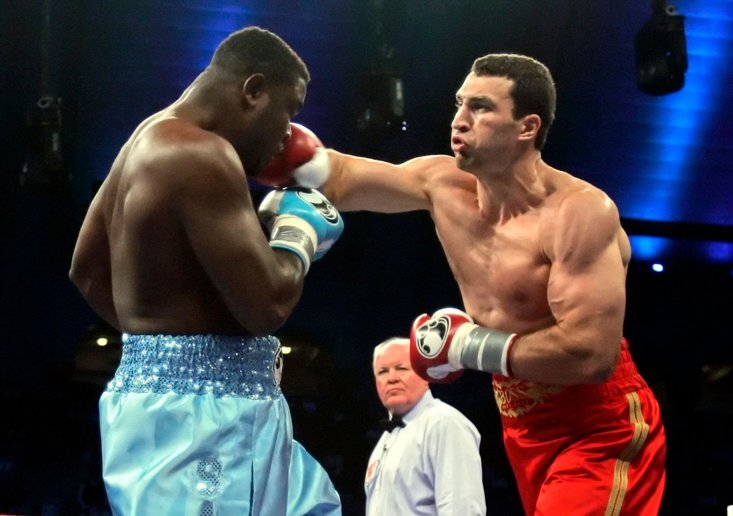 But, unlike against Brewster, or Sanders, or Purrity, this time Klitschko refused to stay down. He rose once again and the fight slotted back into its natural rhythm. Peter drove in, feeling like one more shot would do it. The shot never came, and he himself was rattled by a sharp Klitschko left hook in the final round. The fight went to the scorecards, and despite being knocked down three times, Klitschko took the unanimous decision.

This heavyweight classic, delivered just when the flagging division needed it most, would do wonders for the careers of both men. Peter shrugged off defeat the same way he shrugged off Klitschko’s punches, and racked up five wins in a row, including two against the legendary James ‘Lights Out’ Toney. He would beat Oleg Maskaev for the WBC championship in 2008, before the curse of the Klitschkos struck him again. He relinquished his title to Wladimir’s older brother, Vitali, via TKO after eight completed rounds.

For Wladimir, this fight was the first day of the rest of his career. He would not lose again for a decade, winning the IBF championship by stopping Chris Byrd in his next outing, and eventually unifying it with the WBO, WBA and Ring Magazine iterations of the title. He would also meet Samuel Peter again along the way, but their rematch was not a patch on the original. Klitschko won a one-sided bout by knockout in the 10th round, effectively ending Peter’s run as a world class heavyweight and bringing their dispute full circle.

Samuel Peter never replaced Mike Tyson as a mainstream icon, but his career lives long in the memory. He has not boxed since 2019, but this phenomenal war has etched his name into boxing folklore, and coupled with his WBC title win, makes for a credible legacy for the ‘Nigerian Nightmare’.

x
Suggested Searches:
Manchester United
Liverpool
Manchester City
Marcus Rashford
Premier League
More
boxing
Oleksandr Usyk Puts In Boxing Clinic Against AJ To Take Heavyweight...
You’d be forgiven if you’re starting to grow a little weary of hearing ‘Sweet Caroline’ [ ... ]
boxing
Okolie Cruises To Victory In First World Title Defence On AJ...
The first defence of Lawrence Okolie’s WBO cruiserweight crown ended swiftly on the undercard [ ... ]
boxing
The Rebuild Begins For Callum Smith As He Steps Up To Light...
Callum Smith was the best super middleweight in the world. The Liverpool fighter was the latest outstanding [ ... ]
boxing
Anthony Joshua Weighs In 19lbs Heavier Than Usyk Ahead Of Heavyweight...
Anthony Joshua has weighed in at 240lbs ahead of his heavyweight showdown with Oleksandr Usyk this weekend, [ ... ]
boxing
Okolie Is The Latest In A Proud Line Of British Cruiserweight...
Anthony Joshua will not be the only British world champion stepping into the ring at the Tottenham Hotspur [ ... ]
boxing
Anthony Joshua vs Oleksandr Usyk Is Fight Of The Year, Says...
Ahead of Oleksandr Usyk’s heavyweight showdown with Anthony Joshua at the Tottenham Hotspur Stadium, [ ... ]
boxing
From Mike Tyson To Mr. Dream, How Punch-Out!! Defined Boxing...
Only 55 men truly know what it is like to face ‘Iron’ Mike Tyson. But a generation of gamers [ ... ]
boxing
Anthony Joshua Treating Oleksandr Usyk Fight Like Just Another...
Anyone expecting fireworks akin to Canelo and Caleb Plant’s presser might have been left disappointed [ ... ]
boxing
Six Of The Best: Famous Boxing Father And Son Duos
Campbell Hatton faces Sonni Martinez this weekend in his fourth professional fight. While the Manchester [ ... ]
boxing
A Usyk Win Could Derail AJ-Fury, But Bring Us An Undisputed...
When the dust settles and Anthony Joshua vs Oleksandr Usyk is in the record books, fans and media alike [ ... ]
boxing
Eubank And Watson Made History That Should Never Be Repeated
Every boxing match is a roll of the dice. Fans demand ferocity and violence. They roll the dice and [ ... ]
boxing
Next Best Thing: Why Usyk Is The Best Opponent AJ Could Have...
Anthony Joshua steps into the ring with Oleksandr Usyk on Saturday, defending his WBA, WBO and IBF world [ ... ]
boxing
Start Time? Undercard? How To Watch? Everything You Need to...
Anthony Joshua’s IBF, WBA and WBO belts will all be on the line this weekend when he takes on [ ... ]
boxing
Dillian Whyte To Fight Otto Wallin, Five Boxing Stories You...
Dillian Whyte could face a tough heavyweight test in October, Jake Paul is helping to make a women’s [ ... ]
boxing
Bridge Over The River Why?: WBC Confirms First Bridgerweight...
Boxing has a new world championship in a brand new weight class, as Oscar Rivas and Bryant Jennings [ ... ]
boxing
Crawford vs Porter: Top Welter Scrap Can Cure Boxing Of Its...
WBO welterweight champion Terence Crawford will meet former two-time belt-holder Shawn Porter on 20th [ ... ]
boxing
Tales From The Crypto: Amir Khan Fronts Bizarre Finance Influencer...
You have seen your favourite YouTubers knock out basketball players. You have seen MMA fighters destroy [ ... ]
boxing
Atrocity Exhibition: Boxing Must Stop Encouraging Fighters Like...
Evander Holyfield is no stranger to unedifying ends to a career. ‘The Real Deal’ has reached [ ... ]
boxing
Tyson Fury Shares Career Bucket List, Five Boxing Stories You...
Tyson Fury has mapped out his ideal boxing bucket list, Donald Trump is back and Billy Joe Saunders [ ... ]
boxing
Anthony Joshua's Ferocious Punching Power The Key Against Usyk,...
There’s a little over a fortnight to go until the showdown between WBA, IBF, WBO, and IBO heavyweight [ ... ]
boxing
First Line Of Defence: When The Best Brits Put Their Belts On...
Sunny Edwards was set to defend his IBF Flyweight championship against Jayson Mama on Saturday at the [ ... ]
boxing
When They Were Kings: Triller’s Old Guard Have Seen Better Days
Propped up by a mixture of celebrities, retired fighters, influencers and the odd rising boxer, Triller [ ... ]
boxing
Oscar Valdez Fighting After Positive Drugs Test Casts Boxing...
WBC super featherweight champion Oscar Valdez has tested positive for the banned substance phentermine [ ... ]
boxing
Lara Slice Puts Warrington Redemption On Ice
Josh Warrington stormed into Headingley to the strains of ‘I Predict A Riot’, but not even [ ... ]
boxing
Triumphant Taylor And Heroic Hughes Highlight Warrington vs...
There is no question that Josh Warrington drew the large and vocal crowd to Headingley, to watch him [ ... ]
boxing
Influencers Need Not Apply: Fury, Joshua and Canelo Lead Boxing’s...
Last weekend, Jake Paul “treated” us to the latest chapter in his boxing odyssey. Next Saturday, [ ... ]
boxing
Josh Warrington Admits Pressure Is On As He Seeks Revenge Against...
Josh Warrington is gearing up for a shot at revenge on Saturday night when he takes on Mauricio Lara [ ... ]
boxing
Undisputed vs Undisputed: A Future Fight Between Serrano And...
Among the YouTubers and gross mismatches on show in Cleveland, Ohio on the Jake Paul vs Tyron Woodley [ ... ]
boxing
A Night At The Circus: Paul Squeaks Past Woodley As Tommy Fury...
Jake Paul moved to 4-0 (3 KOs) last night with a split decision victory over former UFC champion Tyron [ ... ]
boxing
Angelo Dundee: Three Masterpieces From Boxing’s Greatest Trainer
Perhaps the greatest cornerman of all-time, Angelo Dundee guided the careers of sixteen world champions [ ... ]