Boxing
News
Saul Alvarez lost the the first fight, so why should he dictate terms for the repeat?
Joey Mills
08:00, 16 Nov 2022

Saul ‘Canelo’ Alvarez has targeted a May return to the ring, after having surgery on his left wrist. The Mexican superstar is targeting a fight with recent conqueror Dmitry Bivol, who defeated him in a WBA light heavyweight championship fight last May. The ‘repeat or revenge’ tag makes this a highly-saleable fight, particularly given the fact both have won since. But for Bivol, the proposed fight might not be his best move.

In an ideal world, the brilliant Bivol would hold the cards. He is coming off a 2022 that should see him sweep the board as boxing publications hand out their end-of-year awards. After stunning ‘Canelo’, and the world, Bivol solidified his pound-for-pound credentials earlier this month. The Kyrgyzstan-born boxer was scintillating in a points win over unbeaten Gilberto ‘Zurdo’ Ramirez in Dubai just under two weeks ago. One of the finest fighters on the planet, Bivol should be able to dictate terms.

However, it looks like the opposite will take place when it comes to Alvarez. Despite losing the first fight, ‘Canelo’ remains the biggest name in boxing. The undisputed super middleweight champion stepped up in weight and failed to capture Bivol’s WBA prize. Now reports suggest that Bivol will be asked to move down to 168-pounds for the rematch. For the Russian, this just doesn’t make sense.

Bivol has never fought at super middleweight in his 21-fight career. Meanwhile, Alvarez is unbeaten at the weight and last year he became the first four-belt champion in 168lb history. Hardly a level playing field. It is the sort of move a boxer usually only makes when they are devoid of options. But Bivol has options, one in particular that is preferable to a ‘Canelo’ rematch.

A fight with the man who holds the other three 175lb titles, Artur Beterbiev, is a far more attractive fight for Bivol at this point. Both men are unbeaten and stylistically they match up well. Beterbiev is the classic puncher, with every one of his 18 wins arriving by way of knockout. Bivol is the consummate boxer, using speed, distance and angles to befuddle his 21 victims. 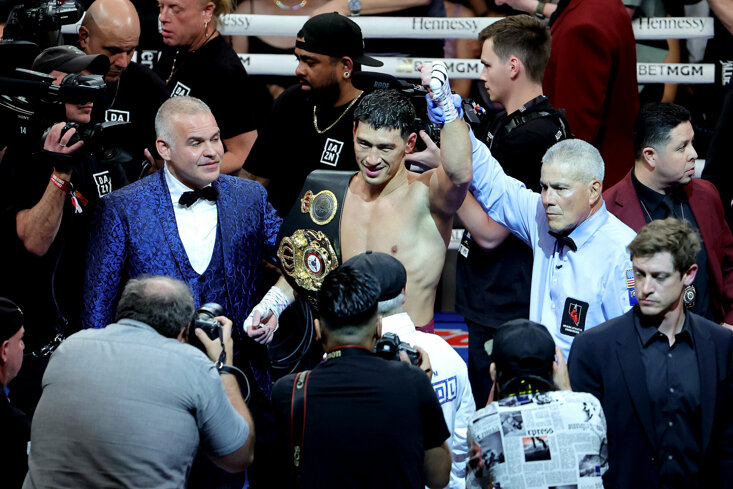 Bivol has earned a Beterbiev fight. Why should he go over old ground instead? Why should he be the one sacrificing weight to accommodate ‘Canelo’? Sadly it’s that all too familiar refrain of “money talks”. To the committed boxing watcher, Bivol vs Beterbiev is a veritable feast. But to the casual fan, the people who tune in for five or six major cards a year, they know who ‘Canelo’ is. They don’t know Beterbiev and they likely couldn’t have named Bivol until he defeated Alvarez. In these situations, sadly the money-spinning mainstream attraction usually trumps the beautifully-matched aficionado’s choice.

If Bivol-’Canelo’ II does happen, which looks increasingly likely, the Russian should at least stand firm on the weight issue. If Alvarez wants revenge that badly, he can come back to light heavyweight to get it. After all, he is a former WBO champion in the division. This is not the equivalent of the fanciful talk about the Mexican fighting Oleksandr Usyk up at heavyweight. 175 lbs is doable for ‘Canelo’. Therefore, considering he lost the first bout, he can be the one to concede and make the weight again.

Despite the misgivings expressed here, a super middleweight title bout between the two feels like a distinct possibility. Like Floyd Mayweather and Manny Pacquiao before him, ‘Canelo’ is the latest superstar boxer who is allowed to dictate terms when it comes to finer details like weight. Bivol might even convince himself it’s the right move, considering he could become a two-weight world champion for his troubles. But, with Beterbiev waiting in the wings, it would make far more sense at this stage to stand firm at light heavyweight, ‘Canelo’ or no ‘Canelo’.

x
Suggested Searches:
The Sportsman
Manchester United
Liverpool
Manchester City
Premier League
More
boxing
Oleksandr Usyk Enters Ring After Tyson Fury Batters Derek Chisora
Tyson Fury retained his WBC heavyweight title with a controlled and dominating display over fellow [ ... ]
boxing
Fit For A Gypsy King: The Greatest Performances Of Tyson Fury
Look alive you big dossers, 'The Gypsy King' is back. Tyson Fury defends his WBC championship [ ... ]
boxing
Del Boy's Half-Dozen: The Greatest Victories Of Derek Chisora
Despite being perhaps the most entertaining British heavyweight of this generation, Derek Chisora’s [ ... ]
boxing
Oleksandr Usyk Promoter Targeting Undisputed Clash With Tyson...
An undisputed heavyweight title fight between Tyson Fury and Oleksandr Usyk could happen in early [ ... ]
boxing
Tyson Fury On Retirement: I’m Not Built For A Normal Life
Tyson Fury returns to the ring this weekend when he puts his WBC heavyweight world title on the line [ ... ]
boxing
Mike Tyson, Floyd Patterson And Boxing's Youngest Heavyweight...
On this day in 1956, Floyd Patterson stopped the great Archie Moore in five rounds to become the heavyweight [ ... ]
boxing
Everything You Need To Know About Estrada Vs 'Chocolatito' III
Not all trilogies are created equal. But a rivalry poised at one win apiece, with each previous meeting [ ... ]
boxing
On This Day In 2015: Tyson Fury Ends The Wladimir Klitschko...
Tyson Fury walks into Tottenham Hotspur Stadium this Saturday as a proven commodity. As he makes his [ ... ]
boxing
What Does Dillian Whyte Have Left? Controversial Win Leaves...
Whatever you thought of the decision, something wasn’t quite right about Dillian Whyte’s [ ... ]
boxing
Tyson Fury vs Derek Chisora III: Everything You Need To Know...
Tyson Fury puts his WBC heavyweight title on the line this weekend when he meets Derek Chisora in the [ ... ]
boxing
Gorman Vs Wardley Is A Throwback Fight Worthy Of The British...
On Saturday night, Fabio Wardley and Nathan Gorman will honour one of the great British boxing traditions. [ ... ]
boxing
Five Blows From The Body Snatcher: Dillian Whyte's Greatest...
Dillian Whyte will be looking to bounce back to winning ways this weekend when he takes on undefeated [ ... ]
boxing
Carl Froch Vs George Groves And Boxing's Great British Grudge...
Nine years ago today, Carl Froch and George Groves collided at the Manchester Arena, waging the first [ ... ]
boxing
Dalton Smith: 'Get A Couple Of Million And I'll Smack A YouTuber!'
Dalton Smith is a star on the rise. The Sheffield super lightweight has just made the first defence [ ... ]
boxing
Zach Parker Vs John Ryder: Everything You Need To Know
The WBO interim super-middleweight title is on the line at the O2 Arena this weekend in a fascinating [ ... ]
boxing
Dillian Whyte Vs Jermaine Franklin: Everything You Need To Know...
Heavyweight contender Dillian Whyte will be looking to bounce back to winning ways this weekend when [ ... ]
boxing
Gervonta 'Tank' Davis And Ryan Garcia Agree To Mouthwatering...
WBA ‘regular’ lightweight champion Gervonta Davis has agreed a fight with unbeaten contender [ ... ]
boxing
The Weekend Boxing Preview: European Titles, Unbeaten Superstars...
After a star-studded weekend where old stagers Ricky Hatton and Floyd Mayweather took part in exhibitions, [ ... ]
boxing
Martin Scorsese At 80: Celebrating Raging Bull, The Iconic 'Anti-Rocky'
“And though I'm no Olivier, if he fought Sugar Ray he would say that the thing ain't the [ ... ]
boxing
Fury-Wilder 4 And Usyk-Hrgovic: The Heavyweight Fights Nobody...
Ask any boxing fan which heavyweight fight they would cherish above all others and you’d get the [ ... ]
boxing
The Panel: Should Women's Boxing Move To Three-Minute Rounds?
Welcome to The Panel, where we speak to a group of star names from across the fight game about the big [ ... ]
boxing
A Tale Of Two Exhibitions: Ricky Hatton And Floyd Mayweather...
On 8th December 2007, Floyd Mayweather defeated Ricky Hatton in Las Vegas, with the WBC and The Ring [ ... ]
boxing
Tommy Fury vs Paul Bamba Cancelled: Is Fury Unprofessional,...
Tommy Fury’s stock has never been lower. This weekend, when due to fight Paul Bamba, he weighed [ ... ]
boxing
Redemption Day: Natasha Jonas Clinches The Treble Against Marie-Eve...
A year ago, Natasha Jonas’ two most recent fights were a pair of failed attempts to win world [ ... ]
boxing
Chasing Gold: Conner Tudsbury Determined To Become A Mancunian...
There was something of a media circus the day Moss Side Fire Station Boxing Club opened its doors in [ ... ]
boxing
Haney-Lomachenko, Stevenson-Cruz And More Ordered At WBC Convention
The World Boxing Council hosted their 60th annual convention, in which they laid out plans and policy [ ... ]
boxing
'You Want Homer To Fight Tatum?!': 26 Years Of 'The Homer They...
It was a heavyweight title fight like no other. Watched by 9.7 million viewers on its initial airing [ ... ]
boxing
Back From The Brink: Natasha Jonas Has Gone From Nearly Girl...
A year ago, Natasha Jonas had failed to win her last two bouts. The decorated amateur had seemed nailed [ ... ]
boxing
This Is Hitman Heritage: The Very Best Of Ricky 'The Hitman'...
Ricky Hatton returns to the ring this Saturday in an exhibition bout against legendary three-weight [ ... ]
boxing
Ricky Hatton vs Marco Antonio Barrera: Everything You Need To...
British boxing legend Ricky Hatton returns to the ring this weekend for the first time in nearly a decade [ ... ]