It’s nearing the end of the long, hot summer. The year is 1984. You’ve got your Member’s Only jacket on your back, and Now That’s What I Call Music! 3 on your Sony Walkman. One man dominates the world of tennis, he rules with a headband and a hell of a temper. His name is John Patrick McEnroe Junior. You watch in awe as he wins his fourth US Open title, in yet another straight sets victory, defeating Ivan Lendl 6-3, 6-4, 6-1, to bookmark a brilliant burst of supreme talent. 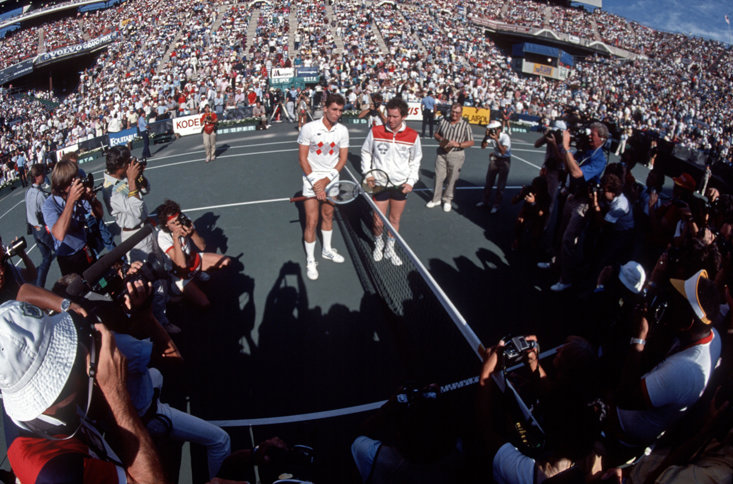 The exact date is September 9, exactly five years to the day since he won his first US Open, beating Vitas Gerulaitis, his fellow American. Gerulaitis, the guy the young McEnroe had repeatedly pestered to try and sneak him into New York’s hottest nightclub of the day, Studio 54, in pursuit of women.

Five years on and J.P. McEnroe didn’t need anybody’s help getting in anywhere, least of all a nightclub. The mid-eighties supreme figures of the Grand Prix tennis circuit were an eclectic bunch. Alongside the brash and bratty McEnroe, there was Borg, Connors, Ashe, Vilas, and Lendl, amongst those standing tallest. Fine men all. But which one would become the wise statesman-like figure, guiding both a generation of players and devotees, to and through the great game, for the next four decades?

Back then you’d have put your crisp, green, one pound notes on it being Connors or Borg. Certainly not McEnroe. The military superbrat, with the glorious bouffanted hair, all tighty-whities and Dunlop-damaging deadliness.

But that is exactly what has happened.

So how did we get here? 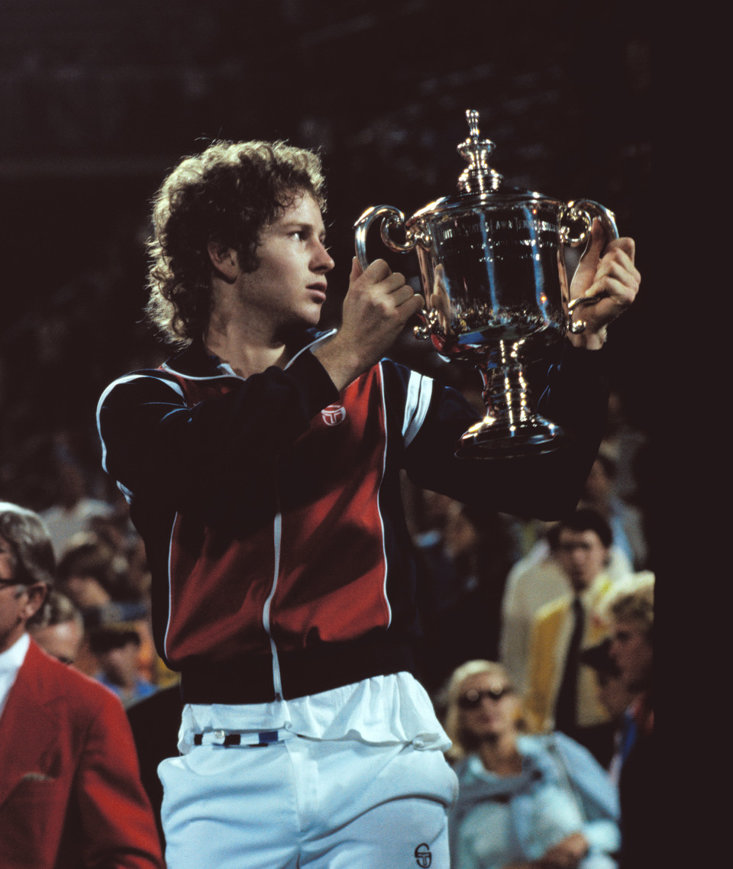 McEnroe came from a self-confessed ‘family of yellers’, where success and shouting was required and demanded. “My parents gave 110%,” he said in an interview with the BBC in 2019. “If you got to the finals of Wimbledon, it was: 'Why didn’t you win it?'  If you are number two, you have got to be one. That propelled me for a long time but it is also difficult that you feel no matter what you do, it is not enough.”

Away from his actual participation in tennis, there are few as identifiable characters associated with it.

He has parodied his notoriety and explosive outbursts in campaigns for car-rental companies and PETA (“Not Spayed! You cannot be serious. Neutering is good for my dog’s temper!”), and cameos in both (appropriately) Anger Management and Mr Deeds with Adam Sandler, the latter playing up to his ‘first bad boy of tennis’ persona, in which he and the titular character smoked cigars and threw eggs at cars.

Married to his wife of 25 years, singer/songwriter Patty Smyth (note: that’s the Patty with a y, not an i), he once got interrupted by rocking out privately in his hotel room to David Bowie’s ‘Suffragette City’…. by David Bowie, who, upon hearing his jam asked him to come and hang out. But politely asked him to leave the guitar behind. He also owns an appointment-only art gallery, once saying in recognising the symbiosis of an artist and a sportstar, “I love art and I relate to artists a lot.”

The turning point came not just with the hanging up of his racquet on the singles’ circuit, nor with the requirement to provide a mature, authoritative voice when first offered the Wimbledon gig, though the latter responsibility certainly helped.

“The BBC years ago decided they wanted a change of direction in their commentary and they wanted to bring me on board,” he would tell Radio 4s Desert Island Discs, “They let me do my thing. They let me be myself.

“That’s turned out to be to my benefit as well because people see me in a different light to when they would see me ranting and raving on the tennis court.” 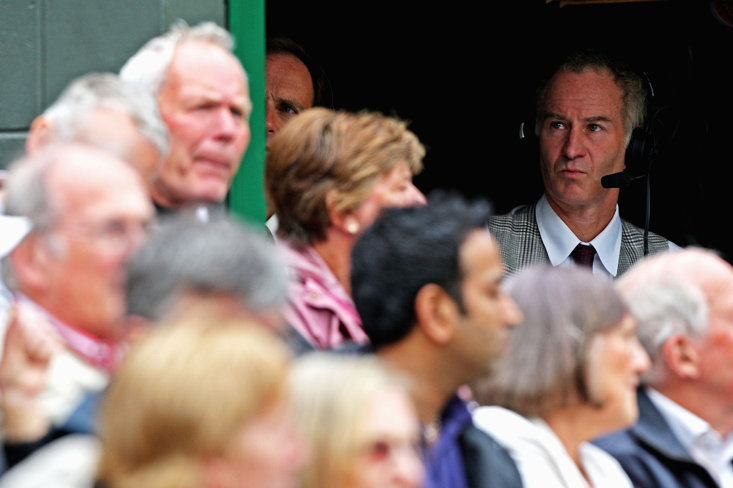 ‘Been there, done that’ means his voice is respected, and he has realised the respect that comes with it. He is still recognised as an almost peerless player, who spent four consecutive years as world number one, and was the leading male face of the sport in the 1980s (and truly a typical ‘bratty’ product of the decade), to become the now reassuring, wise Lebowski-like figure.

“If you don't mature and mellow and have a better overview and perspective of things at 58, you are going to be a kid your entire life." was how he put it in 2017.

But being more mellow, has not made the great man mute. Rather, he has readily waded into the mire. He courted controversy when he steadfastly stated that he believed Serena Williams, though he thought was the greatest female tennis player of all time, would struggle to be in the world's top 700 if she was on the men's circuit. He willingly stood side-by-side with Martina Navratilova in Melbourne, to demand the renaming of Margaret Court Arena in the wake of Court’s anti-LGBT stance.

His subsequent success has been both acknowledging the person that he was perceived to be and simply ‘being himself’. He remains the man who enjoyed testing his tennis-watching audience to cause a reaction, but the ‘superbrat’ was more or less exclusively saved for the court.

Over time, the steady revelation of a more layered character and various nuances, combined with the memory unabashed devotion to and unequivocal knowledge of tennis, has led John McEnroe’s respected status of 2022: the acharya with a (literal) ace up his sleeve. He is a colourful character that represents both a throw-back and progression. John McEnroe should be seen today to not only epitomise everything good about tennis, but how it can strive to be better.

x
Suggested Searches:
The Sportsman
Manchester United
Liverpool
Manchester City
Premier League
More
tennis
British Star Cameron Norrie Wins First ATP Title On Clay Ahead...
Cameron Norrie saw his preparations for the French Open come together perfectly by winning his [ ... ]
tennis
Wimbledon Faces Major Dilemma As WTA And ATP Withdraw Rankings...
Unless there are further seismic developments in the weeks to come, this year’s Wimbledon Championships [ ... ]
tennis
End Of An Era For British Women's Tennis As Robson Joins Konta...
As they say, nothing lasts forever, and in sport careers come and go in the blink of an eye. On Monday, [ ... ]
tennis
Everything You Need To Know About The 2022 French Open As Djokovic...
The French Open is here and the qualifiers have begun for the second Grand Slam tournament of the year. [ ... ]
tennis
Rafael Nadal's Ten Most Career-Defining Wins Ahead Of Seismic...
As Rafael Nadal continues his build-up for the French Open, where he will attempt to extend two huge [ ... ]
tennis
Can Alcaraz Follow In Compatriot Nadal's Footsteps And Dominate...
The French Open is just around the corner and after falling at the semi-final stage last year, everyone [ ... ]
tennis
Andy Murray v Novak Djokovic: The Great Battle Resumes After...
It has been five years in the making. Andy Murray and Novak Djokovic go to battle once again on Thursday [ ... ]
tennis
British Stars Enjoy Positive Start To Madrid Open
It has been a fine start for British talent in the Madrid Open this week with Emma Raducanu, Dan Evans, [ ... ]
tennis
Can Croatia’s Junior Sensation Petra Marcinko Follow World No1...
A quick glance at the roll call of honour of junior girls Grand Slam winners is enough to show it is [ ... ]
tennis
Emma Raducanu Needs The Freedom To Develop At Her Own Pace
Change is a thing of nature, it happens all the time and sport is no different. For teams, players come [ ... ]
tennis
Outspoken Novak Djokovic Is In Danger Of Following In Margaret...
‘Sometimes the wise man says nothing at all’ Novak Djokovic could learn to take this advice [ ... ]
tennis
British Tennis Is In Safe Hands As Cameron Norrie Breaks Top...
Emma Raducanu’s US Open triumph in September was a monumental piece of British sporting history [ ... ]
tennis
No Escape From Alcaraz: The Latest Teenage Sensation Taking...
Last year, the world of tennis fell in love with a teenage sensation as Britain’s very own Emma [ ... ]
tennis
Naomi Osaka Is Winning Matches, But More Importantly Smiling...
Naomi Osaka has battled her way through to the semi-finals of the Miami Open after defeating America’s [ ... ]
tennis
Linda Fruhvirtova: The 16-Year-Old Sensation Following In Sharapova's...
What were you doing at 16? Probably not making an impact on the sport of tennis in the same way that [ ... ]
tennis
Grand Slam Winners Thiem & Wawrinka In Joint Injury Return On...
For two former Grand Slam winners, who both climbed as high as No3 in the world, the Andalucia Open [ ... ]
tennis
Miami Open: Jack Draper A “Better Player” Ahead Of Rematch With...
On Friday, out in the Florida sun, the heat will rise on court at the Miami Open as we witness a Battle [ ... ]
tennis
Injury Setback Is Just Another Hurdle For Nadal To Clear As...
2022 has so far exceeded expectations for Rafael Nadal and some of the tennis he has showcased has been [ ... ]
tennis
Ashleigh Barty Retires: ''There Is No Right Or Wrong Way To...
World No1 and reigning Wimbledon champion Ash Barty has left the tennis world stunned by announcing [ ... ]
tennis
Iga Swiatek Up To No2 In World Rankings After Scorching Start...
Whatever Iga Swiatek’s still relatively new coach Tomasz Wiktorowski said to her after scraping [ ... ]
tennis
On This Day: Roger Federer Joins Jimmy Connors As A Centurion
Roger Federer is a tennis icon who has spearheaded an era of greatness and intense competition. His [ ... ]
tennis
World No1 Daniil Medvedev Ushering In A New Era On The Court
The tide is changing in tennis. A new era is being ushered in as an 18-year monopoly has finally come [ ... ]
tennis
One Year Since Novak Djokovic Won The Australian Open, Has He...
It’s been quite the year for Novak Djokovic, who is back in action today. On this day in 2021, [ ... ]
tennis
Djokovic's Vow To Miss Tournaments Poses Risk For His Grand...
We may be in February and the Australian Open is already done and dusted but the Novak Djokovic Covid [ ... ]
tennis
Del Potro's Tennis Legacy Is Secure Ahead Of Argentine's Imminent...
Tennis is preparing to bid farewell to one of the star players of this era. He may not be on the level [ ... ]
tennis
Greatest Of All Time? Nadal's 21st Grand Slam Title Makes Him...
On Sunday we witnessed history, and it epitomised the great period of rich history of tennis that has [ ... ]
tennis
Rafael Nadal Pulls Off The Ultimate Comeback To Win The 2022...
Rafael Nadal produced an astonishing comeback to secure the most improbable victory of his career and [ ... ]
tennis
Ashleigh Barty Becomes First Home Singles Winner Of Australian...
For 87 minutes, there was barely a flicker of emotion from Ashleigh Barty. No histrionics, no drama [ ... ]
tennis
Historic Weekend In Melbourne As 2022 Australian Open Comes...
This year’s Australian Open has served up some excellent tennis and we are at the last stretch [ ... ]
tennis
Five Years Since Her Last Grand Slam Win, Serena Williams Remains...
Remarkably, it has now been a full five years since the greatest female tennis player of all [ ... ]