2022 was truly the year of women’s boxing. Katie Taylor and Amanda Serrano headlined Madison Square Garden in The Sportsman’s pick for Fight of the Year. The first-ever all-female card was staged at the O2 Arena in London. Headlined by Claressa Shields’ victory over rival Savannah Marshall, the event was a roaring success. There were also big title wins for the likes of Chantelle Cameron and Ebanie Bridges. All in all, while the men’s game faltered, boxing’s female contingent carried the sport on their shoulders.

But there was one fighter that stood out from this illustrious crowd. Liverpool’s Natasha Jonas is the recipient of The Sportsman Women’s Boxer of the Year award. Her incredible journey this year took her from the brink of retirement to a three-belt world champion. No fighter changed their circumstances as dramatically as Jonas in 2022.

At the start of the year, ‘Miss GB’ had won just one of her last three outings. While she had ended 2021 with a victory in a six-rounder, her previous two bouts had seen Jonas come away empty-handed from two world title challenges. A draw with Terri Harper and a loss to Katie Taylor seemed to end any hopes of securing a belt. At the age of 37, retirement seemed to loom.

But the Toxteth-born boxer dusted herself off and set to work in 2022. Chris Namus was first up, with the WBO light-middleweight champion defending her title against Jonas on the Amir Khan-Kell Brook card in Manchester. Jonas seemed to channel her previous championship disappointments into her performance. She pounded the visitor in two rounds to lift a world title at the third time of asking.

Jonas’ next fight was a unification clash with unbeaten Patricia Berghult. The Swede had beaten Hannah Rankin to win the WBC championship at the weight. In a Liverpool homecoming for Jonas, she won via unanimous decision. Two fights and two title wins is quite the year by anyone’s standards, but Jonas wasn’t done yet. 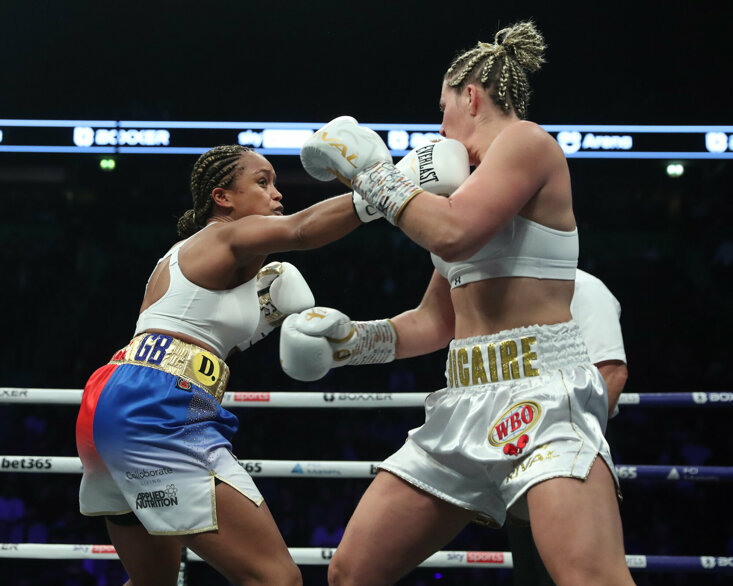 Bringing her 2022 full-circle, Jonas ventured to the iconic Manchester Arena once again. Headlining a BOXXER card at the famous venue, Jonas beat Canada’s IBF champion, Marie-Eve Dicaire, in a hard-fought ten-rounder. Dicaire’s only previous loss was to Claressa Shields, which demonstrates the quality of opponent that Jonas has beaten this year. The combined record of the three boxers she faced was 58-7-1, with six of those losses befalling Namus.

Plenty of fighters racked up phenomenal wins in 2022. In any other year, Taylor or Shields would have been a lock. Winning exhilarating fights on major shows would have made either a shoo-in. But only Jonas took on three reigning world champions and beat them all. That she did this at all is impressive. That she did it when most had written off her credentials as a world class fighter is simply stunning.

2023 could provide the icing on the cake. Old rival Terri Harper is the reigning WBA champion at light-middleweight. After their draw last time out, there is definitely unfinished business to be settled. The fact this fight would be to crown an undisputed champion makes it all the more exciting. Jonas is a worthy winner of The Sportsman Women’s Boxer of the Year 2022. If she carries on like this, she could be in the running for the 2023 award.