Football
News
England defeated Wales 3-0 to send them through to the knockout stages as Group B winners
Conor Keane
22:00, 29 Nov 2022

Day 10 of the World Cup saw England crush Wales to progress to the knockout stages as Group B winners as the USA joined them with a slender victory over Iran. Here is your daily wrap of all of Tuesday’s action and a look ahead to the action coming later this week.

No Sadio Mane, no problem. The African champions booked their place in the round of 16 with a 2-1 victory over Ecuador. Ismaila Sarr’s penalty put the Lions of Teranga ahead in the first half. They suffered a minor setback in the second when Moises Caicedo equalised for Ecuador before Senegal captain Kalidou Koulibaly volleyed in the winner moments later. It is a special moment for coach Aliou Cisse, who 20 years ago captained Senegal to the quarter-finals.

Three games, three goals. It has already been a spectacular World Cup campaign for the Netherlands’ Cody Gakpo. The Dutch rising star’s stock is continuing to rise as each game passes in Qatar and he looks to be Louis van Gaal’s key to success this winter. With each dazzling display, the more rumours are swirling about his future come January. The player is flattered with interest from the Premier League, but his mind is solely on the task in hand with his national team right now.

Marcus Rashford’s return to top form has been a great story this season. His brace against Wales showed how his confidence has returned and that now makes him one of Gareth Southgate’s biggest assets for the knockout stages of the tournament. Not only is he a threat with his dribbling and pace, but his set-pieces as his first goal was a stunning free-kick into the far corner. His second was rather poor goalkeeping from Danny Ward but it marked England’s 100th goal at a World Cup finals.

While everyone was focused on how poor England looked against USA in matchday two, the Stars and Stripes weren’t given enough credit for how they suppressed the Three Lions’ attack. Christian Pulisic’s first-half strike was enough for USA to beat Iran to take second spot in Group B and join England in the knockout stages. 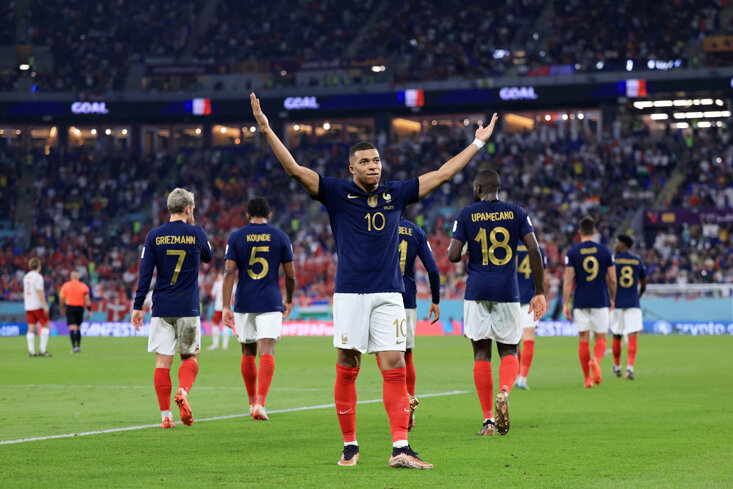 Deschamps hints Mbappe could be dropped against Tunisia

With France already through to the last 16, Les Bleus boss Didier Deschamps has hinted that there could be changes for his side’s final group match against Tunisia on Thursday. One of the players he mentioned was star striker Kylian Mbappe, who is the joint-highest scorer in the tournament so far with three.

On Thursday, history will be made as an all-female refereeing team will take charge of Costa Rica’s clash with Germany in Group E - the first time ever for a men's World Cup match. Stephanie Frappart will be the first woman to referee at a men's World Cup. The Frenchwoman became the first female official at the tournament when she was named as the fourth official for Mexico and Poland's game last Tuesday. She will be joined by Brazil's Neuza Back and Mexican Karen Diaz Medina.