Darts
News
Matt Hulmes takes a look at the final four games of the first round at the Betfred World Matchplay in Blackpool
Matt Hulmes
15:26, 19 Jul 2021

The final four first round games take place in the Betfred World Matchplay at the Blackpool Winter Gardens this evening and we get to feast our eyes on two time winner Michael van Gerwen.

For the first time in seven years, Mighty Mike has lost his status as the world number one with Gerwyn Price taking that accolade. He has slipped down to number three, his lowest ranking since 2012 but appears in a good place to turn his year around.

Just two TV titles last year is an underwhelming season for MvG and his recent Matchplay record is not inspiring either. Back-to-back wins in 2015 and 2016 were followed by a quarter-final defeat in 2017 and just one win in the tournament has followed in the next three years.

Dominant early performances from Price, Peter Wright, and Jose de Sousa, those that surround the Dutchman in the outright market, have laid down a marker, one that van Gerwen will want to try and emulate tonight.

He faces the Aussie Damon Heta, making his debut in Blackpool and yet to progress past the last eight of any major. He is the world number 45 but should not be able to lay a glove on the Dutch darting doyen should he play up to scratch, just as odds of 2/7 suggest. It is 13/5 for a Heta victory, but the 11/10 about MvG -3.5 games (10-6 win or better) is very tempting.

The final first round match-up pits last year's runner-up and 2018 Matchplay maestro Gary Anderson against Stephen Bunting. The Bullet had a good run to the final eight two years ago in his local tournament and the St Helens slinger reached the semi-final of the worlds just seven months back. 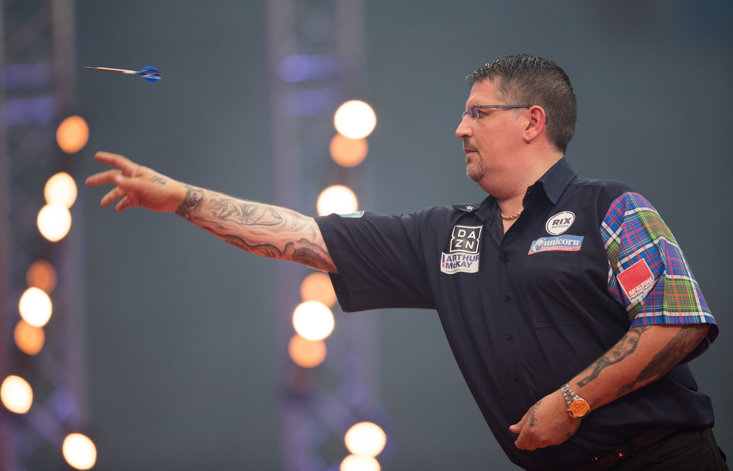 He is 11/8 for victory and the world number 18 is a respected rival for Anderson but has only beaten the Flying Scotsman three times in 12 attempts and was a first round victim in 2018 when Anderson went onto victory. The Scotsman will be hoping history can repeat and is 25/1 for the title but just 8/13 to book a spot in round two.

In the last Blackpool edition of the Betfred World Matchplay, Mervyn King won his first round encounter with Nathan Aspinall 10-5, a 14/1 shot tonight for punters who like history repeating itself. King also edged past The Asp in the Master in January at the quarter-final stage and as the outsider of the pair, he appeals at 11/10 in receipt of 1.5 games on the handicap.

First on stage tonight sees ‘Superchin’ Daryl Gurney take on Ian ‘Diamond’ White in a match that the compilers find too close to call, pricing both players at 10/11 to progress.