World No1 Iga Swiatek crashed out of Wimbledon to France’s Alize Cornet on Saturday to throw the women’s singles draw wide open – and leaving any number of those left standing in the last 16 dreaming of lifting the Venus Rosewater dish.

An emphatic 6-4, 6-2 defeat principally resulted from a dreadful, nervous and edgy start from which the 21-year-old Swiatek, the recent French Open champion who came onto Court One on a 37-game winning streak, never truly recovered.

Swiatek, the No1 seed, was a red-hot favourite for the title after the retirement of last year’s winner Ash Barty and the absence of Naomi Osaka. But it is all still relatively new on grass, and she showed signs of vulnerability in the second round, dropping a set to the Dutch journeywoman and world No138 Lesley Pattinama Kerkhove.

However vulnerability turned into all-out collapse against the 32-year-old Cornet. After trailing 0-3 in the first set Swiatek battled back to 2-3, but could not get level at either 3-3 or 4-4 – and Cornet held nerve to close it out to her great delight, and that of her entourage in the player’s box.

It looked for all the world as if a comeback could be on the cards when Swiatek moved 2-0 up in the second set. But from there here form and composure just melted away, and she finished the match a pale shadow of the player that has terrorised the rest of the tour this calendar year. 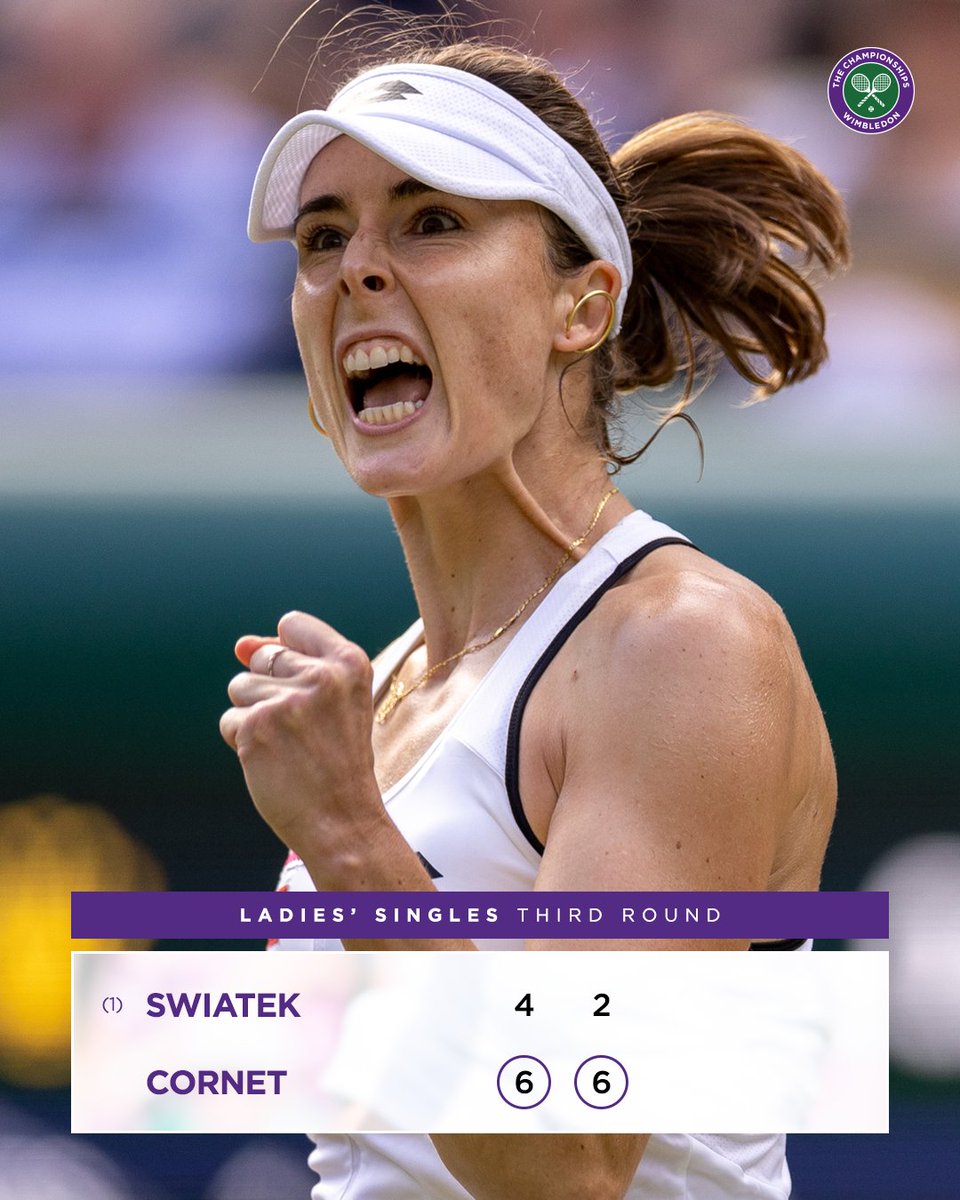 And as well as Simona Halep there are other names now truly in the mix in Ons Jabeur, Paula Badosa, Jelena Ostapenko, Amanda Anisim ova, Jule Niemeier, CarolineGarcia, Elena Rybakina, Petra Martic – and in action on Sunday Britain’s Heather Watson.

Swiatek, whose winning streak was the longest this century, said: “I know I didn't play good tennis, I was pretty confused about my tactics. As a solid player she the took advantage of that. The thing that I changed this season is I started being more and more aggressive. It was really comfortable for me to have the initiative and be proactive. But here I couldn't control the ball. So I needed to slow down a little bit.

“And when you play aggressively and you suddenly change the way you play, it's not easy to keep that. Yeah, so I got a little bit confused. I didn’t tank it…I just didn’t know what to do.

“I know how I felt before matches, I know how I felt when I was practicing. Let's just say that I didn't feel like I'm in a best shape. So I'm kind of aware that this could happen. I tried many things to feel better on the grass court, but it didn't really work out. I hope the streak is going to be a thing that I'm going to be proud of.

“So many things clicked this season that I thought anything is possible, and I might come back. But, yeah, for sure I didn't have as much belief as on other surfaces. Maybe this is also the reason. Maybe this is something I should change next year.”

It is the third time that Cornet has beaten the current No1 player, including Serena Williams at Wimbledon in the third round in 2014.

Cornet, who now plays Aussie Ajla Tomljanovic, said: “I’m like good wine. In France good wine always ages well. “I have no words right now - it reminds me of the time I beat Serena [Williams] on the same court eight years ago exactly. This court is a lucky charm for me.”