Chelsea great Petr Čech is taking his shot-stopping prowess from the pitch to the rink after announcing that he’s set to prolong his sporting career in becoming part of the Guildford Phoenix ice hockey set-up.

The former Czech Republic international goalkeeper, who announced his retirement from football after a twenty-year career at the beginning of 2019, will be netminder for the Surrey-based sports team. His debut for the Phoenix, who play in the National Ice Hockey League second tier, could come this weekend against Swindon Wildcats 2.

“I am delighted to have the opportunity to play with the Phoenix to get the match experience,” the 37-year-old said in a statement.

"I hope I can help this young team achieve their goals. After 20 years of professional football, this is going to be a wonderful experience for me to play the game I loved to watch and play as a kid."

Čech is keeping his role as a Director of Football at Chelsea, the club where he spent 11 years and made close to 500 appearances, winning four league titles and the Champions League. He also holds the record for most clean sheets in Premier League history (161).

Čech's new ventures echoes the footsteps of another goalkeeping great, Lev Yashin. ‘The Black Spider’, who was part of the Soviet side that won Olympic Gold in 1956, the only goalkeeper to have been named European Footballer of the Year (1963), and was voted the best of the 20th century in his position was initially an ice hockey player. Yashin gave up a prospective career in the sport four years into his two-decade long tenure in net for Dynamo Moscow.

Switching studs for blades, they aren’t the only players to make the leap between sports. Have a look at the five below... 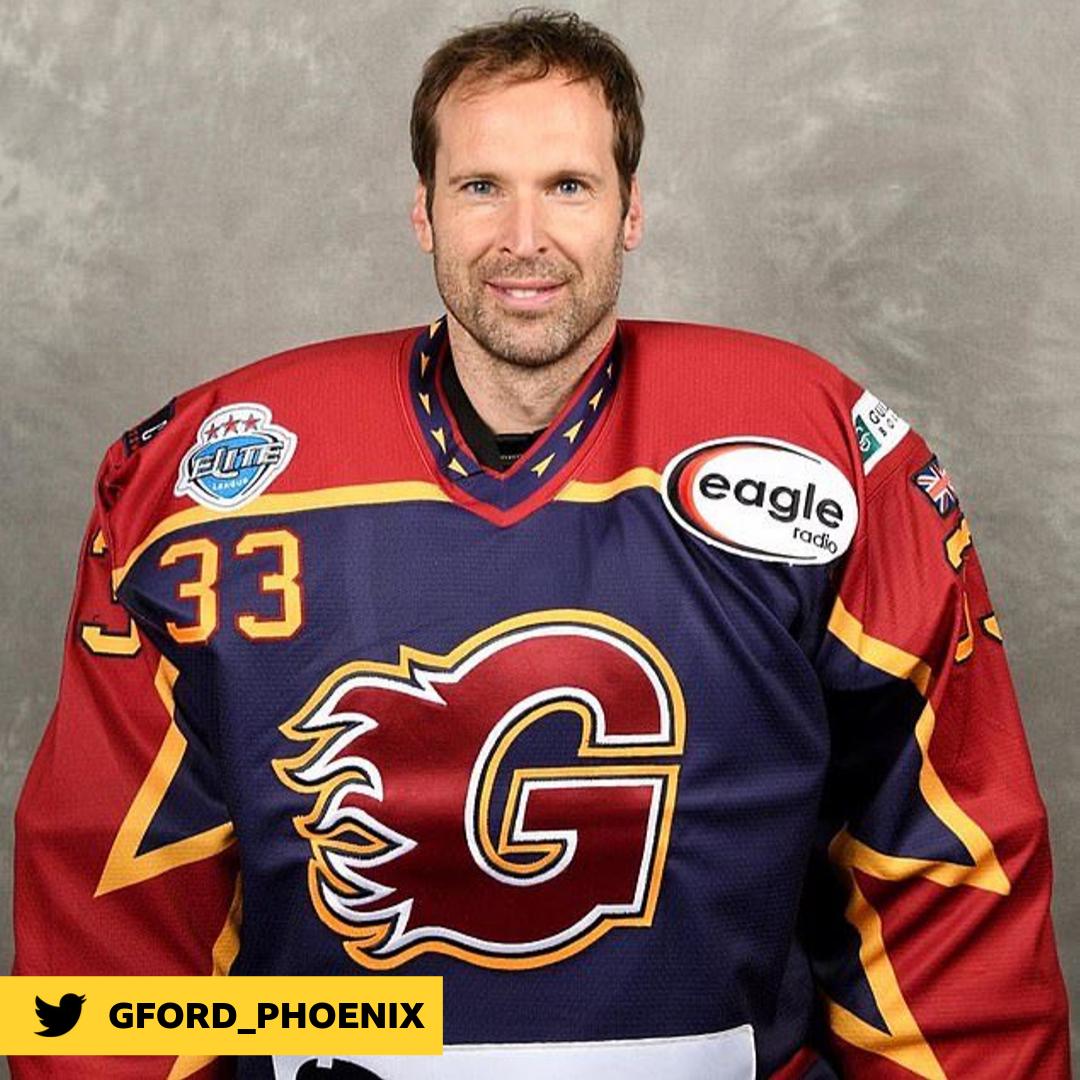 Perhaps the most notorious case of a multi-sport athlete was memorably documented in Michael Jordan’s biopic Space Jam. ‘His Airness’ shocked the world in October 1993 when he announced his departure from the Chicago Bulls after nine years and three Championship titles.

In February 1994, Jordan, ten days short of his 31st birthday, signed a contract with the White Sox to play baseball, a game he had had to quit to focus on basketball at the age of 18. Jordan eventually grafted in the Double-A minor league with the Birmingham Barons.

The first British athlete and only the second woman in history to win medals in two different Olympic sports at the summer games;  Romero, who was appointed MBE in 2009, is a real British belter.

Romero won gold on the cycling individual pursuit  at the 2008 Beijing Olympics four years after winning silver at the Quadruple skulls in rowing.

Romero has modestly played down her move across Olympic sports;

“It wasn't really a decision to change from one sport to the other. I made the decision to retire from rowing and then, within the following month, I had the opportunity to do a bit of testing for the cycling team. They were looking for new talent to fast track for Beijing.” 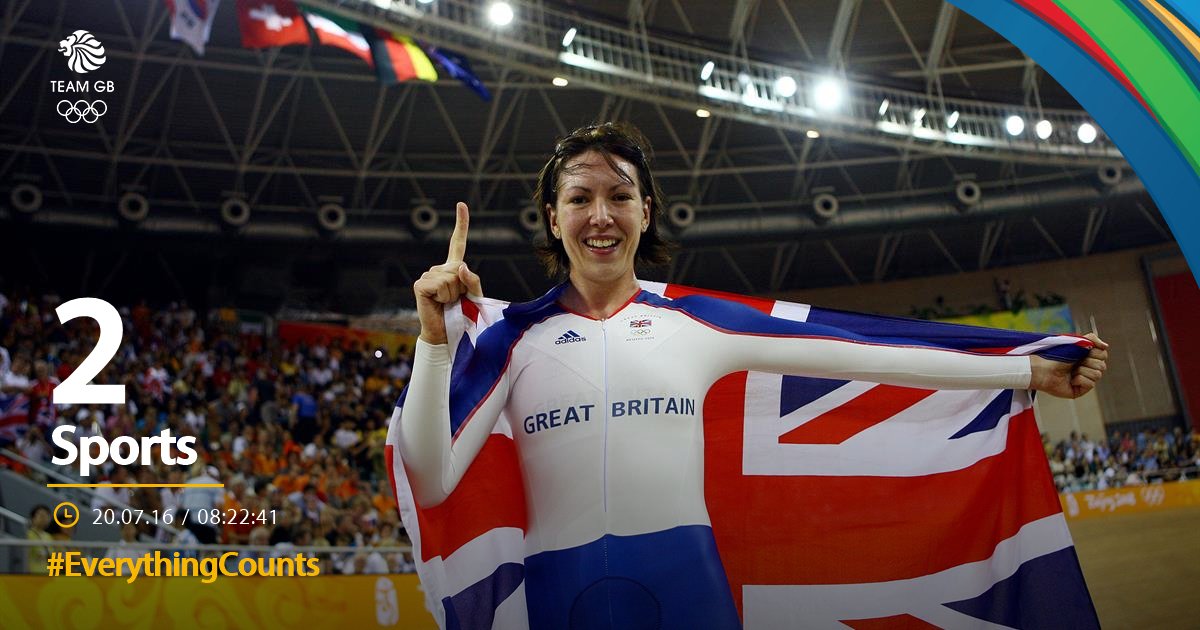 The greatest defender of all time? Arguably. The greatest tennis player of all time? Most definitely not. The magisterial Maldini spent an unbroken 25 years , his entire football career, with Milan from 1984 until 2009. To put this in perspective, this period stems from playing alongside Ray Wilkins to Robinho with the Rossoneri. As a player, Maldini collected a haul of 23 trophies including five Champions League titles.

There was another piece of silverware Maldini was keen to add to his illustrious cabinet, however. In 2017, when his professional football days were long over, Il Capitano earned a wildcard call-up in tennis doubles at an ATP Challenger tournament. At 49-years-old he partnered the 46-year-old Stefano Landonio (that’s a combined age of 95 - quick maths).

Unfortunately, Maldini and his teammate’s pursuit of the Aspria Tennis Cup ended quite swiftly, being knocked out by the partnership of Tomasz Bednarek and David Pel, with a score of 6-1, 6-1.

Fancy being put to shame? Read on. It seems that when Rachel Morris turns her attention to a sport, she’s going to conquer it. Morris became Team GB’s first-ever handcycling gold medallist at the 2008 Beijing Paralympics.  Just the one measly gold medal? Hold your horses, reader.

Next up it was 2016 in Rio de Janeiro. This time Farnham-born Morris switched to rowing, and of course, took to the water like a duck to, well... water. At 33-years-old in Brazil another gold was on its way, in the single skulls event.

In 2019, Morris announced that land and sea wasn’t enough - success on the snow is on the agenda. In February she became the first woman to represent Great Britain at the World Para Nordic Skiing Championship.

"I've always wanted to do a winter sport and the opportunity just came along," she said when interviewed earlier this year by BBC Sport.

"Part of me wondered if I was stupid for wanting to start at the bottom again, but the other part of me was saying it was a great opportunity and I should give it a go and see what happens.

"It is amazing to get to that standard in another sport. It brings together a lot of my strong points and it is very similar to the physiological demand rowing puts on you." 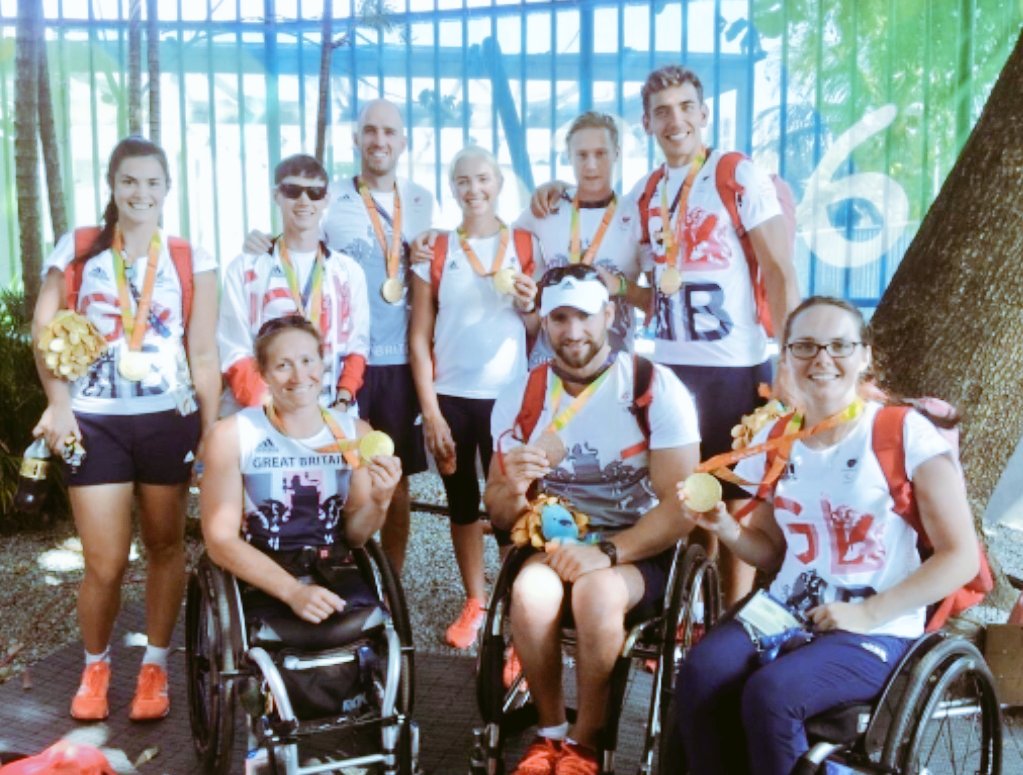 There are a few footballers who have had fisticuffs on the pitch, but few have had the audacity to make the switch into boxing seriously.

Curtis Woodhouse gained a great deal of attention by doing so. The former midfielder played almost 400 games at a high level, for such clubs as Birmingham City, Sheffield United and Hull City. In 2006 - at the age of 26 - he took up boxing professionally and eventually became the world super-lightweight champion in 2014, with victory over Darren Hamilton. Retirement came in 2018, Woodhouse ending his career with an admirable 24-7 (13 KOs) record.

Recently however he announced his foray back into fighting, this time as a bare-knuckle boxer.

“Bare Knuckle boxing has given me the best buzz I’ve ever had. It is right up my street. This is how I learned how to fight. I didn’t have amateur bouts, I fought in pub car parks” Woodhouse told World Boxing News. 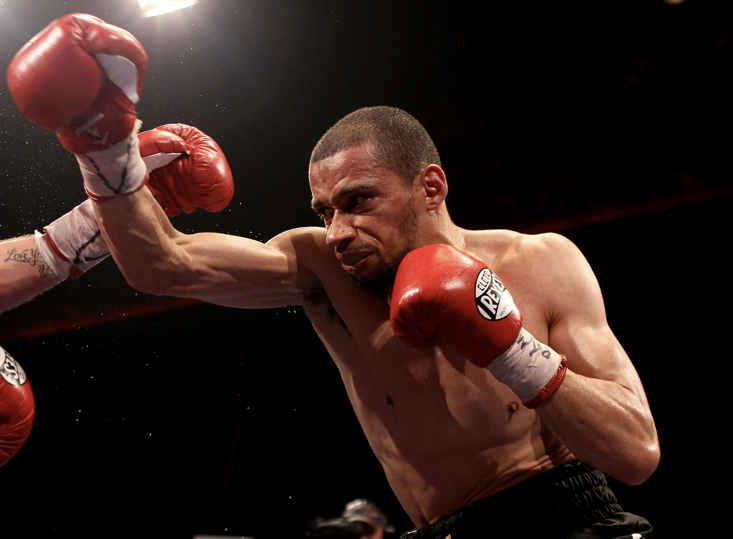 More
sports
The Five Most Hotly Anticipated Sports Games You Will Need To...
2020 has been a stinker, there’s no denying it, but for some us there have been some silver linings [ ... ]
sports
Help Complete The Purpose Built Manchester Youth Zone Tackling...
Red Devil Marcus Rashford may have grabbed 2020 to be anointed the pride of Manchester, but the young [ ... ]
sports
Five Athlete-Endorsed Spirits For The Perfect Father's Day Gift
Father’s Day is less than a week away and many, if not all of us, are still scratching our heads [ ... ]
sports
AJ, Fury Set For Battle Of Britain And Four More Stories You...
It’s been another bonkers week in the world of sport. The Premier League is a week away from its [ ... ]
sports
Five Physically Demanding Video Games That Are Making Fitness...
The battle between getting up to do a bit of exercise or staying slumped on our sofas in a catatonic [ ... ]
sports
Five Tried And Tested Navy Seal Workouts From David Goggins...
It’s rarely been as important to stay both physically and mentally healthy but finding the right [ ... ]
sports
Hamilton's Anger Echoed By Athletes As Sports Unite In Memory...
The tragic death of 46-year-old African American George Floyd through excessive restraint [ ... ]
sports
The Perfect Sport Documentaries To Fill The Void Left By The...
Netflix’s ten-part docuseries on Michael Jordan and his final season with the Chicago Bulls came [ ... ]
sports
Tony Hawk Teams Up With FedEx Driver To Make 7-Year-Old Boy’s...
With the announcement that Tony Hawk’s Pro Skater 1 and 2 would be getting remastered for a new [ ... ]
sports
Forget Football And F1, The Online Chess Revolution Is Taking...
There are many wild and wonderful facts concerning chess; there are more numbers of possible games than [ ... ]
sports
Ferrari, Fury And Misadventures In Toothpaste - Here Are The...
Covid-19 might be playing havoc with the 2020 sporting calendar for the foreseeable future but that [ ... ]
sports
Five Things You Probably Didn't Know About The Tony Hawk's Pro...
For a substantial number of millennials, few athletes encapsulate their childhood as the superlative [ ... ]
sports
The UFC, Messi, Ronaldo And The Other Stories You Might Have...
While many of us spent the Bank Holiday weekend in our gardens desperately trying to make the most of [ ... ]
sports
The Beast Vs Thor Is Dividing Purists But Is The Adrenaline...
From lifting weights to catchweights, the contracts have been signed for Iceland’s Hafþór [ ... ]
sports
The 501kg World Record Setting Thor And Eddie Hall Up For Epic...
This Saturday, in a small garage in Reykjavik, Iceland, the hugely affable, 6ft 9inch strongman, Hafor [ ... ]
sports
Barbecue Your Way To The Memphis World Championships From Your...
Held annually in Memphis at the Tom Lee Park, The World Championship Barbecue Cooking Contest is where [ ... ]
sports
The World Of Sport Comes Together For NHS Charities Cup
Stars across the spectrum of sport have stepped up to support the British National Health Service by [ ... ]
sports
The Rock And Four Other Celebrity Workouts To Keep You Fit During...
Fitness, wellbeing and not eating everything in the fridge through sheer boredom are the top three priorities [ ... ]
sports
WWE Declared ''Essential Service'' In Florida During Coronavirus...
If you were asked what operations are essential during a pandemic, police, hospitals and the fire service [ ... ]
sports
The $64M Man - Christian McCaffrey Is The Richest Running Back...
First he joined the 1K club, and now Christian McCaffrey is in the prime retail estate of the National [ ... ]
sports
The Top 5 Sports-Themed Episodes From The Joe Rogan Experience
Not even Joe Rogan can explain how we got here. All the way back in 2009 on Christmas Eve, Rogan took [ ... ]
sports
''Like Free-Riding In Deep Snow” - Inside The Mind Of A Red...
For the average human, plummeting to earth involves tripping over in the Tesco carpark. For professional [ ... ]
sports
From Hoops To High Tops - Get Ready For Michael Jordan's Netflix...
Netflix’s admirable drive to plug the gaps left by the lack of current sport continues this month [ ... ]
sports
Meet Kiara, The Volleyball Loving Dog Who's Taking Over Instagram
Norway. One of the world’s most Northern countries with 385,207 square kilometres boasting fjords, [ ... ]
sports
Five Expert Tips For Staying Mentally Healthy During A Quarantine
For many working from home can be a struggle. The lack of social interaction with the outside world [ ... ]
sports
From No Ear To Over-Ear - The Best Headphones For Working Out...
The week the government’s social distancing policy was implemented in the United Kingdom, The [ ... ]
sports
Sporting World Finds Its Coronavirus Virtual Oasis With E-Sports...
The current sporting desert has found its virtual oasis as E-sports emerges into the mainstream to occupy [ ... ]
sports
Steve McQueen To James Hunt, Here's The iPlayer Sporting Gems...
Right. You’ve seen everything on Netflix and you’ve scoured through the annals of Amazon [ ... ]
sports
How Self-Isolation Can Impact Elite Athletics And Their Fitness...
The need to self-isolate is paramount for many right now, and that includes elite sports starts. Football [ ... ]
sports
Thank Us Later - Here's Your Amazon Prime Sport Survival Pack
The days without live sport keep ticking by slowly, very slowly. But help is at hand, here at The Sportsman [ ... ]
This website uses cookies
Cookies help us and our partners provide statistics. By browsing this website, you consent to the use of cookies in accordance with our Privacy Policy and Cookies Policy.
Accept & Close