This was meant to be Neymar’s World Cup. It still might be. But on this showing, he will be carried there by Richarlison. The Tottenham Hotspur striker scored the goal of the tournament so far, as part of a stunning brace that beat Serbia 2-0.

The second goal was a moment of magnificence. In a tournament lacking truly spectacular strikes, the man who has his critics and bears the burden of wearing Brazil’s famous number nine shirt, showed his sheer class.

Vinicius Jr fired the ball into him in the box and he popped it up with one foot, before swivelling and firing a spectacular volley past Vanja Milinkovic-Savic, who had performed brilliantly. It was without a doubt the goal of the tournament so far, and it will take some beating over the next three weeks.

It rounded off a brilliant performance, and once again shows how different Richarlison is in the famous yellow shirt. That was his ninth goal in his last seven internationals and he has become Brazil’s go-to man. Not Neymar, not Vinicius, not Raphinha. But Richarlison. Coach Tite said he ‘smelt of goals’ in the build-up to this one, and he stank out the whole of Doha with another impressive goalscoring display.

Alex Sandro thumped a long range effort off the post but Serbia had done well to keep the scores level. After an hour of resolute defending, Brazil finally made the breakthrough. Vinicius found some space on the wing and although his shot was saved, Richarlison reacted quickest to thump the ball in from close range.

He has so often been the man in the right place for Brazil recently, and having made the World Cup squad despite suffering a recent calf injury, he is now ready to fire them to glory. Serbia were not an easy outfit to contain or break down, but this was a superb team performance from the favourites to win the entire competition.

The Sportsman
@TheSportsman
🇧🇷 Richarlison, that was superb. 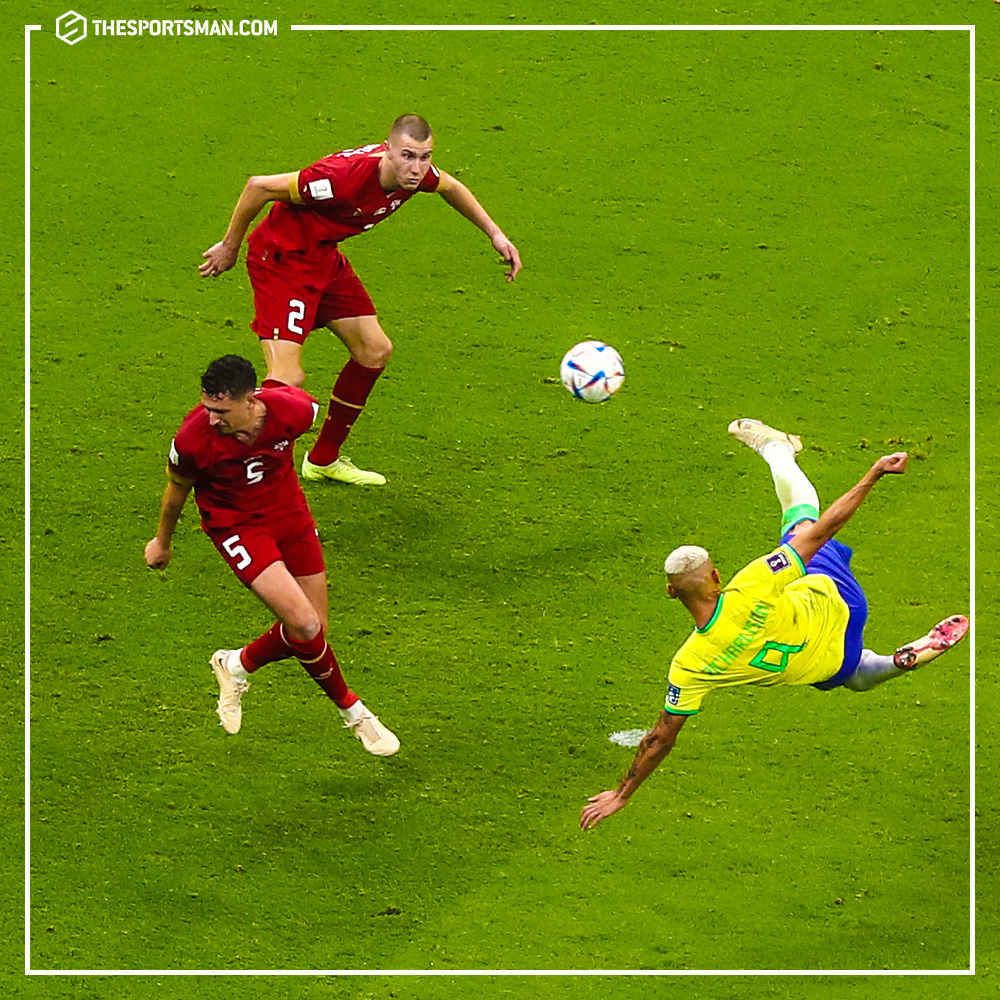 Brazil’s forwards were energetic, but it was their defence that could win them this World Cup. Serbia have a whole heap of attacking talent in the form of Aleksander Mitrovic, Dusan Tadic and Sergej Milinkovic-Savic, but Thiago Silva and Marquinos were imperious in their work. Tite has also got this entire team, despite the egos, to defend as a unit.

They’ve got the best front four in the tournament but they all still work off the ball, and then when it comes down to it, one of them will create something. It could have been more, Casemiro curled the ball onto the crossbar and Vinicius should have found the net on a couple of occasions, but this is a side that has a wealth of talent.

When Serbia threw on an extra striker to try and grab a goal, Brazil brought on Rodrygo, Gabriel Martinelli and Antony. It was almost like the biggest kid in the playground flexing his biceps, just because he can. No other squad in the tournament can compete with this side on paper, but World Cups are not won on paper.

Tite’s men have dealt with the toughest group stage test they are likely to face, and done it with a smile on their face. It wasn’t the Neymar show many expected, perhaps that is still to come, but Brazil’s number nine scoring goals at a World Cup is always a joyous sight. The tournament favourites have just justified that billing.