Ufc
News
The newly crowned lightweight champion has already spoken about The Notorious
Simon Lillicrap
13:13, 16 May 2021

Brazilian superstar Charles Oliveira could take on Conor McGregor in his homeland after he pulled off a miraculous turnaround to win the vacant UFC lightweight title in Texas against Michael Chandler.

After Oliveira secured an early second round knockout to win the belt left vacant following the retirement of the great Khabib Nurmagomedov, McGregor tweeted: “Congrats to Olivera on becoming the 11th UFC lightweight champion. Wonder who Twelve is…”

Of course that is a nod to McGregor’s very own Proper Twelve whiskey, but the Irishman clearly has his sights set on regaining his lightweight crown. However, first he must gain revenge on Dustin Poirier, the man who beat him in January as they play out their rematch at UFC 264 - something Oliveira was keen to point out after his title win.

“Conor, worry about Dustin,” Oliveira told reporters gathered at the post-fight press conference. “Conor, since you’re so tough: First of all, you beat Dustin, and then you come over to Brazil and I’m going to put you on your ass. First he’s got to get past Dustin. He’s one of these guys that just talks a lot. He’s got to beat Dustin first.”

It was a remarkable night for the Brazilian who recovered spectacularly when it looked like the writing was on the wall for the 35-year-old former Bellator champion, as he was pinned down by the American’s guillotine choke attempt in round one. He managed to escape that attempt intact and then bounced back to land a series of key strikes as the round ended. The end of round break only benefited one fighter, as Oliveira caught Chandler with a left hook, before landing several blows which forced Dan Miragliotta to step in just 19 seconds into the second round. 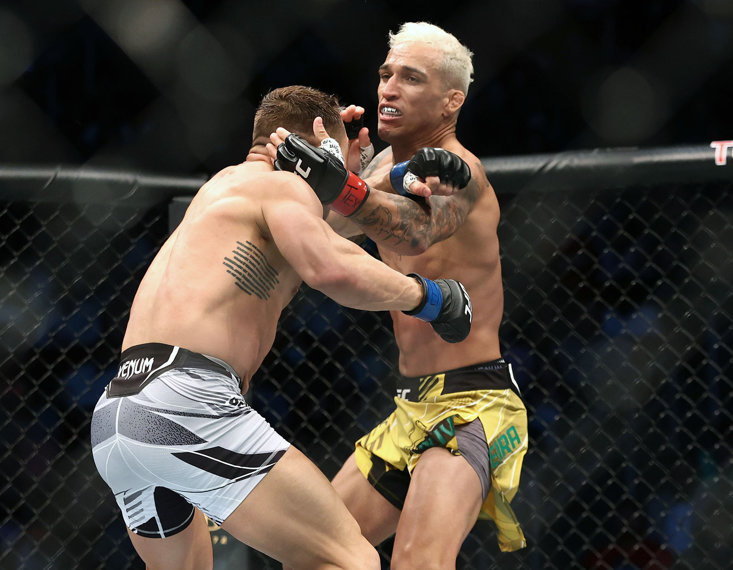 That marked his ninth straight victory and after raising the lightweight belt in the octagon he boasted: "I wanted to come here and show that I'm the best in this division...I'm proving to everybody I'm the lion of lions."

Meanwhile,  in the co-main event, Beneil Dariush threw his name into the ring to face Oliveira with a brilliant performance against former interim lightweight champ Tony Ferguson.

However, Conor McGregor is still the big draw in the UFC and if he gets past Poirier, we could see a mega-fight between him and the newly crowned lightweight champion, with a Brazilian crowd roaring on their hometown hero. What a performance from Oliveira, but what comes next could be even more spectacular.

x
Suggested Searches:
Manchester United
Liverpool
Manchester City
Marcus Rashford
Premier League
More
ufc
Your Guide To UFC 263, As Israel Adesanya Takes On Marvin Vettori
UFC 263 rolls into Arizona this weekend, with the small matter of a rematch between Israel Adesanya [ ... ]
ufc
UFC 262 Preview: A New Heir To The Lightweight Throne Will Be...
It’s been more than three years since we have seen anyone other than Khabib Nurgmagomedov wear [ ... ]
ufc
UFC 261: Jorge Masvidal Suffers First Knock Out As Kamaru Usman...
If the build-up to UFC 261 was hyped up, the night itself exceeded all expectations. In a stunning main [ ... ]
ufc
Kamaru Usman Hints He Could Walk Away After UFC 261 Clash With...
UFC welterweight champion Kamaru Usman has suggested he could walk away from the Octagon after his main [ ... ]
ufc
UFC 261: All You Need To Know Ahead Of A Blockbuster Night In...
Fight fans are in for a real treat in the Octagon this weekend with UFC 261 serving up a blockbuster [ ... ]
ufc
Conor McGregor Cancels Dustin Poirier Trilogy Due To Dispute...
Conor McGregor has insisted his trilogy fight with Dustin Poirier is off after the pair were involved [ ... ]
ufc
New Lightweight Champion To Be Crowned At UFC 262 After Khabib...
It is looking increasingly likely that a new lightweight champion will be crowned at UFC 262 with Michael [ ... ]
ufc
UFC Set To Return In Front Of A Full Crowd With A Stacked Card...
After more than a year of coronavirus-induced capacity restrictions, the UFC is set to finally return [ ... ]
ufc
Four Champions And Three Undisputed Titles On The Line At UFC...
UFC 259 features four champions, as middleweight king Israel Adesanya moves up to 205lbs to battle the [ ... ]
ufc
Bold, Brash And Wealthy, Has Conor McGregor Simply Become Too...
Big and tough as he was, King Kong needed the Empire State Building; the big Silverback just wouldn’t [ ... ]
ufc
Everything We Know About Dana White And The UFC's Fight Island...
Ultimate Fighting Championship president Dana White has been vocal in his commitment to holding UFC [ ... ]
ufc
How Anime Fuelled Israel Adesanya's Ambition, Ability And Style...
Every so often, in every sport, a truly unique character arrives with seemingly the sole purpose of [ ... ]
ufc
Is Banking £1.5Million Per Second Enough To Keep Conor McGregor...
Find someone who looks at you the same way Dana White looks at Conor McGregor. Dana needs Conor. He [ ... ]
ufc
Donald 'Cowboy' Cerrone Is The Adrenaline Junkie Who Has Cheated...
Very, very few of us would dare take on Conor McGregor in a staring contest, let alone have the guts [ ... ]
ufc
''I Need MMA'' - Only The Octagon Can Bring Redemption For Conor...
Conor McGregor is back and, boy, is he glad. The Irishman returns to the cage this weekend to duke it [ ... ]
ufc
McGregor's Talk Of A Boxing Comeback Is Proof He's Running Out...
Conor McGregor is currently preparing for his comeback bout at UFC 246, which takes place at the T-Mobile [ ... ]
ufc
Conor Teams Up With His Boyhood Coach In Preparation For UFC...
Conor McGregor has turned back time as he looks to get the better of Donald Cerrone in UFC 246 on January [ ... ]
ufc
Masvidal Predicts Quick Win For Conor At UFC 246 To Set Up Blockbuster...
Jorge Masvidal, the number three ranked welterweight fighter in the UFC, has tipped Conor McGregor [ ... ]
ufc
Conor McGregor's Return Sells Out In 3 Minutes And Gate Reaches...
Tickets for Conor McGregor’s hotly-anticipated return to the UFC sold out within three minutes [ ... ]
ufc
Conor McGregor Calls Out ''Scurrying Rat'' Khabib Ahead Of His...
Conor McGregor is no stranger to a bit of trash-talking and he has ramped up his return to the UFC by [ ... ]
ufc
Conor McGregor Set To Duel It Out With 'Cowboy' Cerrone At UFC...
Conor McGregor will make his long-awaited return to the Octagon in the New Year by taking on Donald [ ... ]
ufc
Book Review: Chaos Is A Friend Of Mine
“There haven’t been too many like him in sport, and there certainly have been none like [ ... ]
ufc
Feeding The Canvas: Conor McGregor Responds To Dustin Poirier
Conor McGregor has hit back at former lightweight title challenger Dustin Poirier after the American [ ... ]
ufc
“Whatever Comes My Way, I Deserve It” Conor McGregor Breaks...
MMA superstar Conor McGregor has broken his silence on the video that emerged last week showing [ ... ]
ufc
UFC 239: Jon Jones: The Greatest?
As Jon Jones approaches his 32nd birthday and the tenth time in his career to defend his UFC Light Heavyweight [ ... ]
ufc
Former UFC Champion Conor McGregor In Hot Water Again After...
Conor McGregor, the former featherweight and lightweight Ultimate Fighting Champion, is in trouble with [ ... ]
ufc
The Craziest End To A UFC Fight Ever? Cody Garbrandt And Pedro...
Jon Jones stole most of the headlines at UFC 235 last night in Las Vegas but there is no doubt that [ ... ]
ufc
''Literally The Greatest Fighter Of All Time'' - Jon Jones Cruises...
Jon Jones retained his light-heavyweight championship at UFC 235 last night with a clear decision win [ ... ]
ufc
UFC 235 Preview And Fight Night Predictions: Jon Jones And Anthony...
The octagon returns home to the T-Mobile Arena in Las Vegas, with two titles up for grabs as Jon Jones [ ... ]
ufc
Bellator 217 Preview: James Gallagher Headlines Bellator’s Return...
Bellator continues its foray into European territory with a return to the 3Arena in Dublin, Ireland [ ... ]