For a number of millennials, few athletes encapsulate their childhood as the skateboarder Tony Hawk did.

Actually getting to see the man in action in his heyday proved difficult. With internet access limited for most, you’d be required to bank on a friend whose Mum was at work in order to commandeer a Sky box to view the short-lived Extreme Sports Channel.

Many can no doubt relate to the six-week summer holidays exclusively reserved for trips to the skate park, trying in vain to replicate what had been learned through nocturnal PlayStation sessions. Our teacher? The phenomenal Tony Hawk’s Pro Skater series.

The Pro Skater series is among the most popular to grace the videogame world, and that should come as no surprise; immersive gameplay, immensely replayable and that soundtrack - what a soundtrack! To celebrate the Birdman’s 53rd birthday, we take a look at five facts from the series that you probably didn’t know…

The Timing Was Perfect

When the first Tony Hawk game was released in 1999, it became one of the decade’s best selling games, shifting 300,000 copies in North America alone.

But that success may never have been as good had Tony Hawk not launched himself into the public consciousness just a month before the game’s release. At the 1999 X-Games, Hawk became the first skater to officially land a 900°, sending sales of the first game through the roof. 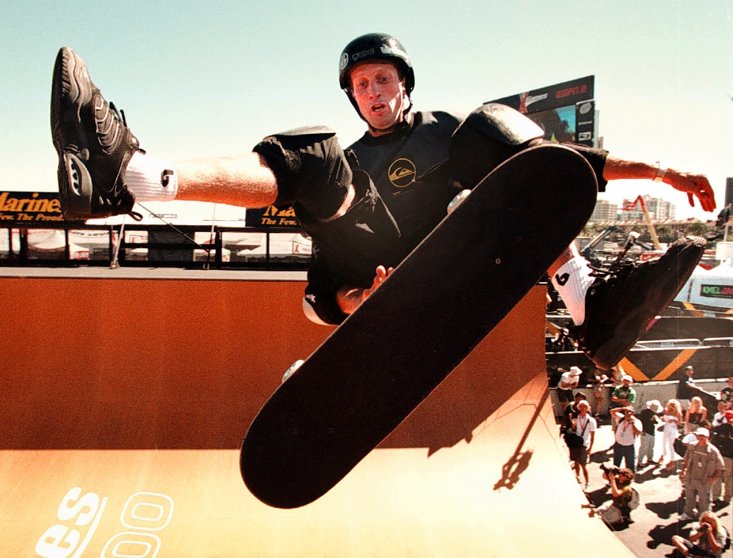 Amassing 64 skateboard contest victories between 1983 to 2003 and becoming the face of the sport would surely pay dividends when it came to board sales but how do they stack up to the game sales?

“They don’t. I couldn’t have bought my house without Tony Hawk Pro Skater royalties,” Hawk once said.

The THPS series has made over $1.4bn in sales, and Hawk’s estimated net worth in 2021 is reportedly a whopping $140m.

History is littered with bad decisions from stuffy boardroom types who don’t understand the direction the world’s moving in and the creation of THPS was no different.

A year before striking a deal with publishers Activision, Hawk had initially wanted Midway, who’d developed Space Invaders and something called 720°, the first ever skateboarding video game. Sadly, Hawk was sent packing and was told that there was no market for a skateboarding game anymore.

His loss, everyone else’s gain. 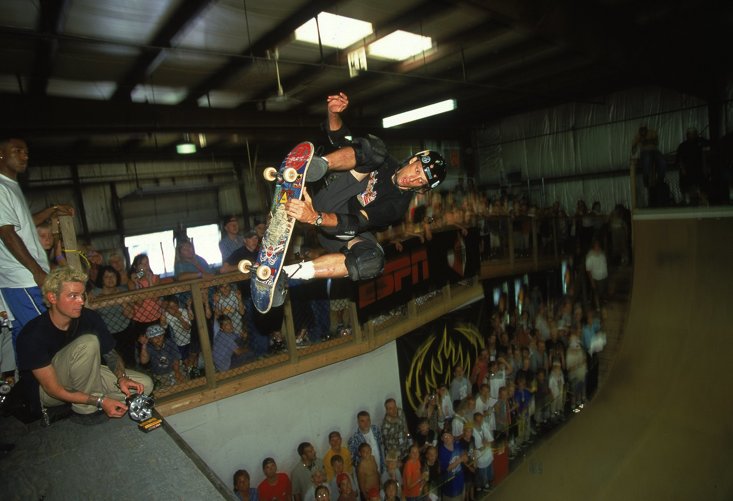 The Games Have Influenced The Latest Generation Of Skaters

“I think that the main thing is that parents are encouraging their kids to skate. That didn’t happen when I was young, ever,” Hawk told The Verge in 2019.

Skateboarding is now firmly in the mainstream, more than it ever was when Hawk was growing up, so it comes as no surprise that the latest generation picked up a lot of their love for the sport from the series.

22 year-old Tyshawn Jones, winner of the 2018 Thrasher Skater of the Year, and one of the very best skaters in the world at the moment, told the New York Times that he learned a lot of what he knows now from playing the games as a child.

Don’t be surprised to see the skaters who line up for this year’s Olympic Games in Tokyo to have been similarly influenced by the series.

With the release of the first THPS game, came a barrage of new experiences completely alien to most kids around the world at the time.

The music, from Papa Roach to Rage Against The Machine, perfectly captured the skate park era of the 2000s, while performing tricks like a kickflip felt organic, as if you could actually work out the mechanics of performing one yourself.

“The thing that I’m proud of is that it represented the culture well,” Hawk told The Verge.

“It represented the lifestyle, in terms of the music and the attitude and the actual skating itself.”

“It taught a whole generation of kids what proper skating can be.”

x
Suggested Searches:
Manchester United
Liverpool
Manchester City
Marcus Rashford
Premier League
More
sports
From Raging Bull To Rudy, Ten Of The Greatest Sports Biopics...
This week saw the trailer drop for King Richard, a brand new biopic of Richard Williams, father [ ... ]
sports
Day Five Olympics Round-Up: GB Relay Team Storm To Gold & Dujardin...
Tokyo 2020 continues to thrill, with Great Britain collecting more medals on Wednesday and some high-profile [ ... ]
sports
Simone Biles Should Be Applauded For Her Withdrawal, Says Mental...
Simone Biles’ decision to withdraw from the all-around gymnastics final has been applauded by [ ... ]
sports
Day Four Olympics Round-Up: More Medals For Team GB In Best...
Great Britain has never had such a successful start to an Olympic Games. As day four comes to a close, [ ... ]
sports
Tokyo Olympics Day Three Round-Up: Team GB Enjoy A Magic Monday
It was a thrilling Monday for Team GB as the squad brought home five medals, including three golds, [ ... ]
sports
From Child Prodigy To Champion, Tom Daley Succeeds In Quest...
It has taken four Olympic Games, but Tom Daley finally claimed his first gold medal alongside Matty [ ... ]
sports
Tokyo Olympics Day Two Round-Up: Team GB Get Medal Tally Up...
There was finally some medal success for the Brits, a match to forget for the USA’s men’s [ ... ]
sports
Tokyo Olympics Day One Round-Up: Adam Peaty Through As GB Footballers...
As the sun sets on day one of the Tokyo 2020 Olympics, some of Great Britain’s finest athletes [ ... ]
sports
Is England Captain Harry Kane Worth £160m Or More To Tottenham...
Harry Kane to Manchester City. The transfer saga that looked certain to drag out through the summer [ ... ]
sports
Coronavirus Is Continuing To Play Havoc With The Sporting Calendar
The UK may have seen a considerable relaxation in Coronavirus restrictions, but the virus is still causing [ ... ]
sports
Ten Of The Greatest Ever Moments From The Olympic Games
The Olympic Games always provide incredible memories for athletes and watchers around the world and [ ... ]
sports
Jessica Ennis-Hill And The Other Home Favourites Who Won Gold...
The Tokyo Olympic Games is fast approaching and the eyes of the world will be on the Games that will [ ... ]
sports
Three Winners And Three Losers From Team GB After Tokyo 2020...
At long last, the extended wait for the start of the Tokyo Olympics is nearly over, and the hype is [ ... ]
sports
From Skateboarding To Speed Climbing, Five New Sports Making...
The Olympics are almost upon us and with a host of new sports making an appearance, our hype for the [ ... ]
sports
Ten Biggest Shocks In Summer Olympics History
Tokyo 2020 is now just a matter of days away and as we gear up to watch the greatest athletes on the [ ... ]
sports
Tony Hawk And His Legendary 900° Landing At The 1999 X-Games
The 2021 summer X-Games, the premiere competition for extreme sports, came to a close on Friday and [ ... ]
sports
Walker The Talker: Even Without Fans, The Magic Remains At The...
Well here we go then. Whatever people think about whether it could, should or would happen, Tokyo 2020 [ ... ]
sports
140,000 Fans Set For Silverstone - But How Have Returning Crowds...
As Covid-19 restrictions move ever nearer to being lifted, we have seen the slow return to normality [ ... ]
sports
Neymar, LeBron James and Federer: The Big Names Missing From...
Dan Evans is the latest British omission who will miss the Tokyo Olympics later this month having tested [ ... ]
sports
Walker The Talker: Olympic Games Will Be A Test Of The Body...
The unifying power of sport. Anyone watching that epic semi-final on Wednesday night couldn’t [ ... ]
sports
Tom Stoltman Becomes First Scot To Claim World’s Strongest Man...
Invergordon strongman Tom Stoltman became the first Scotsman to hold the title of World’s Strongest [ ... ]
sports
England’s Croquet Five Lions Conquer Scotland To Bring It Home...
It was all a world away from the frenzied hype of Euro 2020 gripping the nation. But on five beautifully [ ... ]
sports
The Hulk To ‘The Mountain’, Five Monster Moments From The World’s...
Since its debut in 1977, The World’s Strongest Man has become a beloved spectacle to hundreds [ ... ]
sports
From Indy 500 To Giro d’Italia, Here Are Five Sport Stories...
It’s been a busy weekend in the sporting world and whilst most of the talk might have been around [ ... ]
sports
Mickelson, Serena And The Sporting Legends Who Turned Back Time...
Sport has always been a young person’s game. For years we have been blown away by the talents [ ... ]
sports
FA Cup, Champions League And UFC 262: Your Weekend Of Unmissable...
With indoor meetings of up to six people permitted from Monday, pubs being allowed to partially open [ ... ]
sports
The Year Of The Fox: How The Sporting City Of Leicester Emerged...
In 2012, the greatest thing to happen to the city of Leicester was that the remains of King Richard [ ... ]
sports
No Passion, No Point: Eddie Hearn's Podcast Returns For Third...
He’s now as popular, big, and perhaps as bombastic as the boxers he promotes. Eddie Hearn is also [ ... ]
sports
With 100 Days To Go, Team GB Are Already Set For A Historic...
With 100 days until the delayed Tokyo Olympics, Team GB look set to make history before they have even [ ... ]
sports
Ranking The Best And Worst April Fool's Day Pranks From The...
So another April Fool’s Day has come to an end and as the sun sets on what for some jokers is [ ... ]