Ufc
News
Darren Till went down to another defeat over the weekend, putting his future in serious doubt
Joey Mills
14:03, 06 Sep 2021

Darren Till’s third-round submission loss to Derek Brunson on Saturday night has left the Liverpool middleweight at a career crossroads. Headlining a UFC Fight Night card filled with British talent, Till could not follow victors Jack Shore, Molly McCann, Paddy Pimblett and Tom Aspinall in a UK clean sweep. ‘The Gorilla’ has now lost four of his last five fights, and is drifting down the rankings at 185Ib.

Brunson was always likely to present problems, as Till has struggled with elite level wrestlers in the past. Two-time NCAA All-American Tyron Woodley and Australian National Champion Robert Whittaker have both defeated the popular Scouser, and it was clear from early on that Brunson could follow in their footsteps. After Till tried to keep the fight standing early on, Brunson bullied his way in with a takedown. The American postured up and rained in shots, setting a pattern that would continue throughout the fight.

Many had expected the in-form Brunson, coming off four consecutive wins, to smother his way to a decision. But buoyed by Till’s struggles on the ground, the North Carolinian would press his advantage with strikes to his grounded foe. In the third round Till finally enjoyed success in his preferred arena of stand-up, but it was short-lived as Brunson took him down again. Once more making the most of Till’s vulnerability on the mat, Brunson finished the fight with a rear-naked choke. 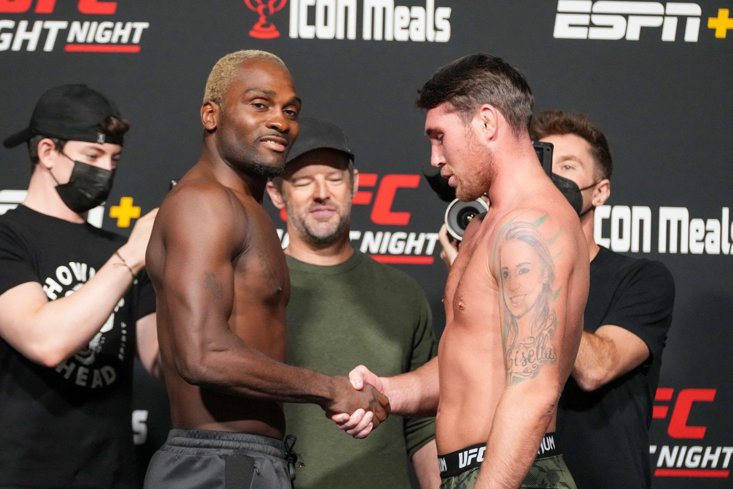 BRUNSON (LEFT) FINISHED OFF TILL IN THE THIRD ROUND

What now for Darren Till? The UFC values the UK market highly, and with the Merseysider remaining a strong domestic ticket-seller, it seems likely he would get a shot at redemption. If that absolution is to come at middleweight, it is likely to be in the lower reaches of the rankings. He has suffered losses to the first and fifth ranked middleweights.

Till needs a win to rehabilitate himself, so avoiding wrestling specialists would be smart. Sean Strickland is on a hot streak, winning his last five fights culminating in a decision over Uriah Hall. Currently ranked eighth, ‘Tarzan’ is a fighter who will stand and throw punches, which plays to Till’s strengths. Kevin Holland is another option that could suit Till. The kickboxer has lost his last two fights, and like the Liverpool man he prefers to keep the action standing. His 14th place in the rankings would also keep Darren in the mix should he be victorious.

If Darren Till is unsuccessful in his next outing, his time in the UFC could come to a close. The rule, though loosely followed, always used to be ‘three losses and you’re out’. This is more of a guideline than anything, and marketable ticket-sellers are often kept beyond a third or even fourth loss. Fellow Brit Dan Hardy was let off with four consecutive losses between 2010 and 2011, before rebounding with two wins, due to his popularity. With his exciting style and passionate local following, it is easy to see Till being retained for a while. But this current run of form cannot last much longer before ‘The Gorilla’ drops out of the rankings, and eventually the UFC, altogether.