Conor McGregor is back and, boy, is he glad.

The Irishman returns to the cage this weekend to duke it out with Donald 'Cowboy' Cerrone at UFC 246 at the T-Mobile Arena in Vegas, having not competed since his defeat by Khabib Nurmagomedov in 2018.

His passion for the sport is as fierce as ever and he’s raring to go.

"I'm here for the love of competition,” he told BT Sport. “I need MMA, it's a deep-rooted passion. I love it dearly. I will be involved in this game for my entire life.

“MMA gives you that focus, gives you that drive, I wasn't as involved in MMA as much as I should have been and idle hands....it's good to be back and focused."

Gunning for the welterweight title, McGregor has been his brash best in the build-up and is adamant he and Khabib will go head-to-head again, claiming he has already agreed to a rematch.

“It was offered to me when they couldn't come to a deal with Tony (Ferguson). They offered it to me and I took it straight away (a rematch with Khabib).

“It was scheduled and there was obviously something going on behind closed doors, then Dana (White) hit me up and I accepted it of course. It's going to happen, it will happen."

All eyes are back on McGregor and there is talk he could be set for a bout with Jorge Masvidal after taking on Cerrone but the UFC superstar insists there are a few possibilities in the pipeline.

"There's many names. Of course, he's in there (Masvidal). I'd like to see him on the scales, let me see.

“Most certainly that's there, the BMF belt would be nice to add to the collection of belts that I have,” he added. 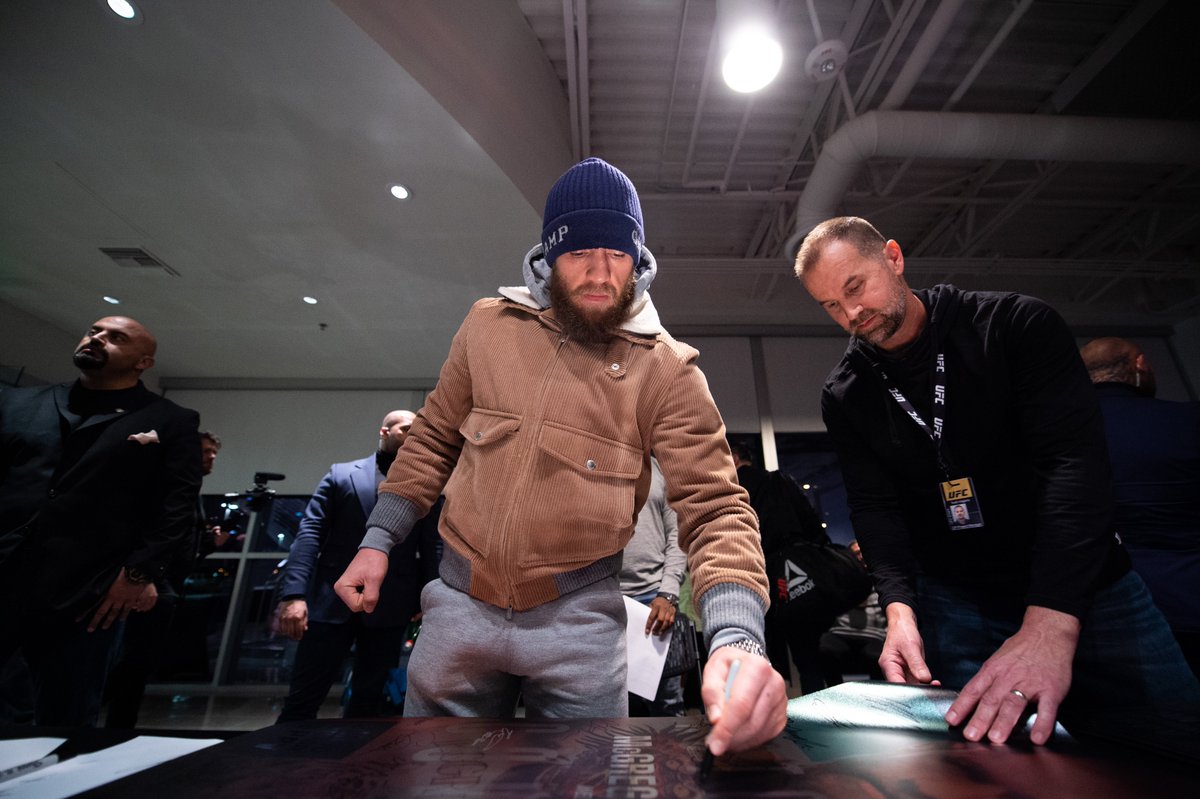 “The options are there, but there's also little stragglers like Gaethje floating around, there's Holloway. There's so many damn names”

Though he turns 32 in the summer, he has no plans to slow down and sees himself fighting well into this decade.

x
Suggested Searches:
Tyson Fury
Manchester United
Marcus Rashford
Lewis Hamilton
F1
Air Jordan
More
ufc
Bold, Brash And Wealthy, Has Conor McGregor Simply Become Too...
Big and tough as he was, King Kong needed the Empire State Building; the big Silverback just wouldn’t [ ... ]
ufc
Everything We Know About Dana White And The UFC's Fight Island...
Ultimate Fighting Championship president Dana White has been vocal in his commitment to holding UFC [ ... ]
ufc
How Anime Fuelled Israel Adesanya's Ambition, Ability And Style...
Every so often, in every sport, a truly unique character arrives with seemingly the sole purpose of [ ... ]
ufc
Is Banking £1.5Million Per Second Enough To Keep Conor McGregor...
Find someone who looks at you the same way Dana White looks at Conor McGregor. Dana needs Conor. He [ ... ]
ufc
Donald 'Cowboy' Cerrone Is The Adrenaline Junkie Who Has Cheated...
Very, very few of us would dare take on Conor McGregor in a staring contest, let alone have the guts [ ... ]
ufc
McGregor's Talk Of A Boxing Comeback Is Proof He's Running Out...
Conor McGregor is currently preparing for his comeback bout at UFC 246, which takes place at the T-Mobile [ ... ]
ufc
Conor Teams Up With His Boyhood Coach In Preparation For UFC...
Conor McGregor has turned back time as he looks to get the better of Donald Cerrone in UFC 246 on January [ ... ]
ufc
Masvidal Predicts Quick Win For Conor At UFC 246 To Set Up Blockbuster...
Jorge Masvidal, the number three ranked welterweight fighter in the UFC, has tipped Conor McGregor [ ... ]
ufc
Conor McGregor's Return Sells Out In 3 Minutes And Gate Reaches...
Tickets for Conor McGregor’s hotly-anticipated return to the UFC sold out within three minutes [ ... ]
ufc
Conor McGregor Calls Out ''Scurrying Rat'' Khabib Ahead Of His...
Conor McGregor is no stranger to a bit of trash-talking and he has ramped up his return to the UFC by [ ... ]
ufc
Conor McGregor Set To Duel It Out With 'Cowboy' Cerrone At UFC...
Conor McGregor will make his long-awaited return to the Octagon in the New Year by taking on Donald [ ... ]
ufc
Book Review: Chaos Is A Friend Of Mine
“There haven’t been too many like him in sport, and there certainly have been none like [ ... ]
ufc
Feeding The Canvas: Conor McGregor Responds To Dustin Poirier
Conor McGregor has hit back at former lightweight title challenger Dustin Poirier after the American [ ... ]
ufc
“Whatever Comes My Way, I Deserve It” Conor McGregor Breaks...
MMA superstar Conor McGregor has broken his silence on the video that emerged last week showing [ ... ]
ufc
UFC 239: Jon Jones: The Greatest?
As Jon Jones approaches his 32nd birthday and the tenth time in his career to defend his UFC Light Heavyweight [ ... ]
ufc
Former UFC Champion Conor McGregor In Hot Water Again After...
Conor McGregor, the former featherweight and lightweight Ultimate Fighting Champion, is in trouble with [ ... ]
ufc
The Craziest End To A UFC Fight Ever? Cody Garbrandt And Pedro...
Jon Jones stole most of the headlines at UFC 235 last night in Las Vegas but there is no doubt that [ ... ]
ufc
''Literally The Greatest Fighter Of All Time'' - Jon Jones Cruises...
Jon Jones retained his light-heavyweight championship at UFC 235 last night with a clear decision win [ ... ]
ufc
UFC 235 Preview And Fight Night Predictions: Jon Jones And Anthony...
The octagon returns home to the T-Mobile Arena in Las Vegas, with two titles up for grabs as Jon Jones [ ... ]
ufc
Bellator 217 Preview: James Gallagher Headlines Bellator’s Return...
Bellator continues its foray into European territory with a return to the 3Arena in Dublin, Ireland [ ... ]
ufc
''Why You Ducking Me?'' - Twitter Reacts To Retirement Of UFC...
The UFC legend George St-Pierre has confirmed his retirement from mixed martial arts and the world of [ ... ]
ufc
“Book It” - Conor McGregor Sets Up Nate Diaz Rematch For UFC...
“Book it. I’ll fight Nate on it.” In music to most UFC fans’ ears, Conor McGregor [ ... ]
ufc
UFC Fighter Dives Into The Crowd After Epic TKO Win In Brazil...
The memories of UFC star Khabib Nurmagomedov diving into the crowd after defeating Conor McGregor still [ ... ]
ufc
Donald ‘Cowyboy’ Cerrone Sets Up Possible Conor McGregor Ireland...
The UFC star Conor McGregor struck up a relationship with the Dallas Cowboys NFL franchise while on [ ... ]
ufc
Cejudo Stops Dillashaw in THIRTY-TWO Seconds at UFC Brooklyn
TJ Dillashaw’s bid to become a two-weight world champion came crashing down early in Brooklyn, [ ... ]
ufc
Conor McGregor Calls Out Tenshin Nasukawa For Tokyo Superfight
If the defeat of Japanese kickboxer Tenshin Nasukawa by Floyd Mayweather last week seemed like a farce [ ... ]
ufc
MMA Fighter Suffers Stomach Churning Leg Break During AKA Fight...
We all know that cage fighting is a tough sport with the athletes always open to serious injury but [ ... ]
ufc
Ouch! Jon Jones Delivers Relentless Devastating Blows to Alexander...
The main event at UFC 232 saw Jon Jones welcomed back to the octagon after serving an almost 18-month [ ... ]
ufc
Unbelievable Amanda Nunes Produces Insane Flurry Of Blows For...
Amanda Nunes stunned Los Angeles, the state of California, and the entire watching world after delivering [ ... ]
ufc
''Come Get Your Belt Back!'' Jon Jones Sensationally Sets Up...
In the aftermath of Jon “Bones” Jones return to the Octagon at UFC 232 and victory over [ ... ]