Sports
News
Looking back at some of sport's most iconic soundbites
Conor Keane
14:35, 22 Nov 2021

Legendary boxing announcer Michael Buffer has been announced by Betfred as a lead figure in their new marketing campaign, bringing one of sport’s greatest voices to our screens. You will have to have been living under a rock to have never heard his infamous “Let’s get ready to rumble” line because it is beautifully timeless.

The witty and infectious phrase was debuted by the 77-year-old back in the 1980s, and his enunciation, voice and tone are what makes the catchphrase so special. As Sugar Ray Leonard once told him: “When you introduce a fighter, it makes him want to fight.”

Sport has always been the perfect platform for individuals to bring words together and make them unforgettable, and Buffer is the best at it. Yet he is not the only one to have a memorable catchphrase in the sporting world, here are just a few other legendary lines.

The veteran football commentator has had his voice heard for decades and he has detailed some of football’s finest moments, but in terms of recurring lines there is one standout for him and that is when he is covering matches for Sky Sports. It is always the perfect set-up for the big clashes just before kick-off to whet the appetites of the supporters glued to their screens at home. 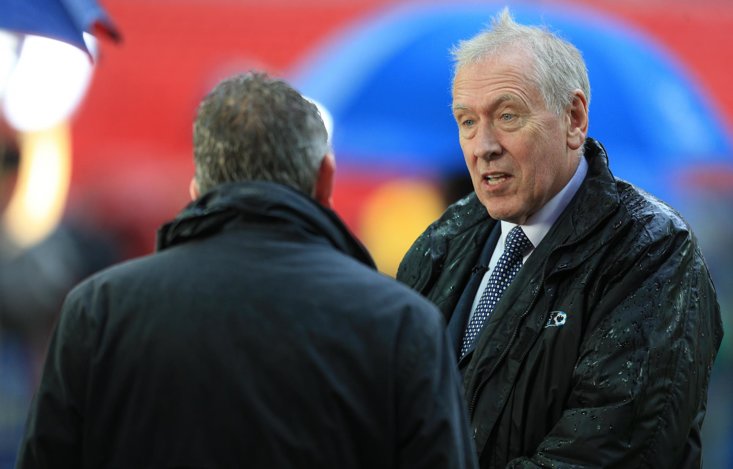 When asked about the origin of the line by FourFourTwo in 2010, Tyler answered: “I’ve always had to link to a break and for 15 years or so I tried to come up with something original every time. It was originally more to just emphasise the live-ness of it than to be a catchphrase.”

This is one of the hardest-hitting catchphrases in sport and it captures the moment before a rally brilliantly. Its origin can be traced to 1946 at the Indy 500 when the event was owned by Tony Hulman. His wife, Mary Fendrich Hulman, was the first person to ever echo those words to drivers and did so until her husband’s death in 1977. The legacy is carried on through their daughter Mari Hulman George.

“You cannot be serious” – John McEnroe

The American tennis legend’s famous line was first heard on court at Wimbledon in 1981 as he was on course to his maiden triumph in SW19. He screamed the line at the umpire for ruling a serve to be out in his first-round match against compatriot Tom Gullikson. This outburst is still remembered and watched around the world to this day, and McEnroe can’t go anywhere without it being bellowed at him.

The late Major League Baseball legend Yogi Berra first uttered these words in 1973, and it is safe to say they have stuck. It was a National League pennant race and Berra’s team, the New York Mets, were a long way behind when he uttered those prophetic words and they rallied to win the division title. The line holds such a position in society that it will likely stand the test of time.

The former-footballer-turned-pundit has blessed our screens with hilarious goofs and lines over the years, but his most famous is the aforementioned in which he links back to Soccer Saturday presenter Jeff Stelling. Countless people use the phrase in daily life as a nod to ‘Kammy’.

The Manchester United legend is the man behind this iconic phrase, dubbed as part of his mind games when he was in charge at Old Trafford and it came into existence in 2003. Not only a legend in the game for his unbelievable (one for you, Kammy) achievements as a manager, but now a wordsmith for blessing the world with this little phrase which is widely used across the game and around the world.

The late goalscoring genius that is Jimmy Greaves dropped this sensationally accurate phrase when he was on ITV alongside Ian St John for Saint and Greavsie. The show ran from 1985 to 1992 on Saturday lunchtimes and drew a huge audience, which is why the catchphrase is still remembered, but mainly because of its wonderful way of summing up football.

“He could go all the way” – Chris Berman

The NFL commentator’s arguably most famous line comes whenever a player is bursting through, seemingly unopposed to score a touchdown. It was a phrase that summarised Berman’s excitement at a darting run and it is so popular in the sport now that people imitate the ESPN legend whenever a similar scenario crops up in a match. But if a player was unsuccessful, Berman would jokingly add, “but he doesn’t.”

Arguably the most famous scripted line to come out of WWE saw legendary wrestler-turned-Hollywood-star Dwayne Johnson speak those words in a bid to spice up a fight and excite the crowd. The line itself personifies Johnson’s background and how hard he had to work to become “the most electrifying man in sports entertainment”. 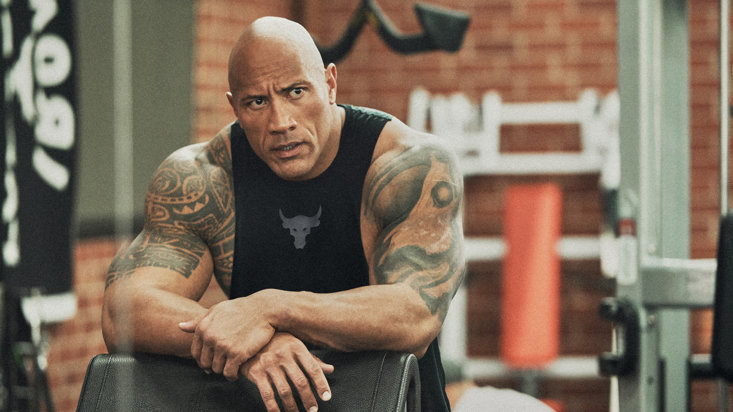 He can run, but he can’t hide - Joe Louis

Incredibly, this popular catchphrase was created in the world of boxing by Joe Louis, the heavyweight champion between 1936 and 1948. Ahead of his 1941 title fight with Billy Conn, it was suggested that Conn, a light-heavyweight champion and therefore the much lighter man, would adopt a ‘hit-and-run’ approach to fighting, to which Louis famously declared, “he can run, but he can’t hide.”

He was right, too. After being behind on the cards to Conn after 12 rounds, Louis knocked him out in the thirteenth.

x
Suggested Searches:
The Sportsman
Manchester United
Liverpool
Manchester City
Premier League
More
sports
Hustle And The Best Sports Films Currently On Netflix
The Adam Sandler renaissance is in full-swing with the Happy Gilmore star’s latest effort, Hustle, [ ... ]
sports
WWE’s Class Of 2002: Two Decades of Dominance, Inside and Outside...
In 2002, just over a year removed from the ‘Monday Night Wars’ between his World Wrestling [ ... ]
sports
Muhammad Ali And The Greatest Trash-Talkers In Sport
Today marks six years since we lost the great Muhammad Ali. Boxing’s most beloved star was as [ ... ]
sports
What Did The World Of Sport Look Like When Queen Elizabeth's...
Queen Elizabeth II celebrates her Platinum Jubilee this week and to commemorate the occasion, we have [ ... ]
sports
Dream Weekend Turns Sour As Huddersfield Fail In Challenge Cup...
It was meant to be the perfect sporting weekend for the town of Huddersfield. With their football and [ ... ]
sports
Monaco, The Masters And More Unbelievable Experiences In Sport
This weekend sees the Formula One teams, fans and staff arrive in the principality of Monaco for the [ ... ]
sports
Tony Hawk's Impact On The World Of Skateboarding Cannot Be Understated...
In the Smithsonian, a baby blue Bahne skateboard sits proudly on display as part of the National Museum [ ... ]
sports
The Saudi Golf League And Other Breakaway Competitions In Sport
There appears to be a civil war looming in golf as the PGA Tour continues to fight back against the [ ... ]
sports
Britain's Top Ten Greatest Sporting Achievements Featuring Roger...
Four minutes. One mile. The seemingly unbreakable human barrier was brought tumbling down by Roger Bannister [ ... ]
sports
Triple H’s Legacy Lies With WWE’s Next Generation
All that remained was a pair of black boots. Black boots that signified the end as they stood proud [ ... ]
sports
Kevin Owens’ History-Making WrestleMania Match With Steve Austin...
The well trodden adage surmises that heroes are worth avoiding, should you ever be presented with the [ ... ]
sports
The Deadman Didn't Rise: Revisiting The End Of The Undertaker’s...
75,167 people can be just as deafening when they are dead silent as when they are roaring in unison. [ ... ]
sports
The Barkley Marathons: The 100-Mile Race That Broke All Of Its...
In 1977, James Earl Ray, the gunman behind the assasination of Martin Luther King Jr., embarked on an [ ... ]
sports
International Women’s Day: Ten Female Superstars To Watch Out...
In honour of this year’s International Women’s Day, we take a look at ten female sports [ ... ]
sports
How Sport Is Handling The Russian Invasion Of Ukraine
The Russian invasion of Ukraine has cast a shadow over our world, with an uncertain darkness hanging [ ... ]
sports
2022 Commonwealth Games: Eight Stars To Look Out For In Birmingham
In just 150 days, the eyes of the world will be fixated on Birmingham for the 22nd Commonwealth Games, [ ... ]
sports
Looking Back At The Most Calamitous Sporting Performances In...
There is nothing worse when it comes to being a professional athlete than when you have a performance [ ... ]
sports
Talent In Tartan: Why 2022 Could Be The Year Of The Scots
Scottish sport thrived in 2021, with star athletes from north of the border making waves on a global [ ... ]
sports
World Cup, Six Nations And Winter Olympics: The Must-See Sporting...
With the haziness of the New Year celebrations behind us, it is time to clear our minds and look ahead [ ... ]
sports
Most Significant Sporting Moments Of 2021: From Fury's KO To...
Sport makes us feel things. This year, we have witnessed a whole array of emotions from England’s [ ... ]
sports
Euro-Mania, Formula One Fireworks And The Best Sporting Moments...
Despite the ever-looming menace that is Covid, the past year has been an unforgettable one in the world [ ... ]
sports
Remembering The Iconic Sports Stars We Lost In 2021
As we bid farewell to 2021, there is an air of hope as we look ahead to what 2022 might bring in the [ ... ]
sports
From Lineker To Ali’s Legacy: The Sportsman’s Favourite Articles...
What a year it's been in the world of sport! Despite all the ongoing uncertainty surrounding the [ ... ]
sports
Olympic Dreams Realised, Football Justice Done: The Sportsman...
It has been an incredible year of sporting drama and intrigue. With 2021 almost in our rearview mirror, [ ... ]
sports
Football In The Trenches, Shaq Vs Kobe & Christmas Day's Special...
Sport and Christmas Day don’t mix, at least that’s what you’ve been programmed to [ ... ]
sports
Mammoth Upsets, Fairytales and History-Makers: The 2021 Sportswomen...
Despite the ever-looming menace that is Covid, the past year has been an unforgettable one in the world [ ... ]
sports
From 30 Salah Goals To A Hamilton Championship Win - What Will...
What a year it’s been for sport! Despite the ongoing issues brought around by the Covid pandemic [ ... ]
sports
From Tiger To Tyson: The Five Best Sports Documentaries Of 2021
There's been a real boom in the quality of sporting documentaries over recent years and 2021 [ ... ]
sports
Gabriel Medina, The South American Surfin' Superstar Who Neymar...
This article first appeared in The Sportsman on May 14th 2020 On grass they have Pelé, [ ... ]
sports
SPOTY 2021: Role Model Raheem Sterling Would Be Worthy Recipient
The build-up to the BBC’s Sports Personality of the Year award show has begun. Six sports stars [ ... ]