The iconic Octagon is set to make it’s long-awaited return to the UK. The UFC have announced a show at the O2 Arena in London on Saturday 19th March. The card, expected to be under the UFC Fight Night banner, arrives almost three years to the day since the company’s last foray onto UK soil.

UFC were scheduled to return in March 2020, but the event was postponed and eventually cancelled due to the coronavirus pandemic. The show that night was set to feature Tyron Woodley fighting for the first time since losing his UFC Welterweight Championship. His opponent on the night was scheduled to be British-Jamaican star Leon Edwards. The world has moved on considerably since that cancelled date. Woodley has since retired from MMA, and lost a pair of lucrative boxing matches to social media star Jake Paul. Edwards outpointed Nate Diaz in his last fight, and could well make an appearance on the O2 card.

Only one fight has been confirmed by UFC president Dana White, and even that bout looks uncertain. While the charismatic chief has gone on record saying Paddy ‘The Baddy’ Pimblett is set to fight Jared Gordon, the Liverpudlian’s team disputes this. Pimblett’s representatives say they are considering options for their man. This is likely just brinkmanship, as Pimblett is a huge domestic ticket seller from his Cage Warriors days. Having made his long-awaited UFC debut stateside, a first-round knockout of Luigi Vendramini last year, it seems logical for Pimblett to fight in the UK next. 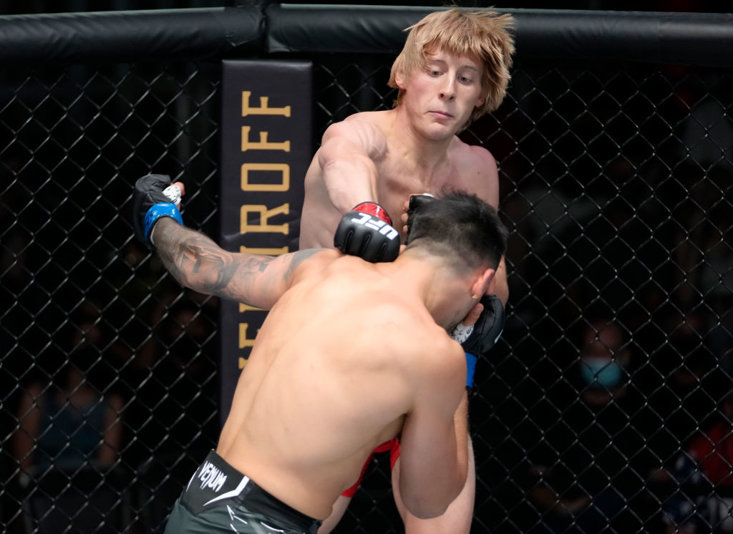 The UFC’s last London card, their eleventh visit to the capital, was headlined by Darren Till’s defeat at the hands of Jorge Masvidal. Liverpool’s ‘Gorilla’ would seem to be another natural fit for the company’s return to these shores. Till has won just one of his three encounters since that Masvidal reverse, and perhaps a supportive crowd in his country is exactly the sort of boost he needs. Wigan heavyweight Tom Aspinall, hometown boy Nathaniel Wood and popular flyweight ‘Meatball’ Molly McCann are other possible options for what is sure to be a stacked card.

London has played host to some classic UFC moments over the years. Renan Barao captured the Interim Bantamweight Championship at the O2 back in 2013. The following year saw future UFC Light Heavyweight Champion Alexander Gustafsson stop hometown hero Jimi Manuwa in a war. Manchester’s Michael Bisping overcame one of the sport’s all-time greats in 2016, when he decisioned Anderson ‘The Spider’ Silva. Whatever UFC has in store for British fight fans in March, it promises to be memorable. The Sportsman will keep you up to date with developments as this must-see fight occasion takes shape.