Losing a derby is never fun, and City fans will have to deal with office banter on Zoom and reams of teasing messages from their United pals on WhatsApp for at least the next few days. The fact it was their fierce local rivals who stopped them from making it 22 straight victories just adds to the Red Devils' ammunition and boosts the local bragging rights. One thing is for sure though, no matter how much gloating they have to suffer, it will be the blue half of Manchester who have the last laugh.

Of course, City will be bitterly disappointed to have lost 2-0 to United on Sunday, but they won’t panic. And yes, it will sting to see their stunning winning record come to an end, but they know they have a job to do and know they are on a seriously good track. Even after losing the derby, they remain 11 points clear at the top of the Premier League table with 10 games remaining.

Bruno Fernandes’ penalty for United after only two minutes was a setback and Luke Shaw’s low strike into the corner to double the visitors' advantage felt like the nail in the coffin for this Manchester derby. For some reason, City, who have seemed invincible in 2021, just didn’t look like getting back into the game. Much like Liverpool down the M62 earlier in the afternoon, they didn’t click into the groove. The attacking moves didn’t flow either, and defensively they were breached rather easily. However, while the Reds are suffering a serious crisis of confidence, for City this defeat is nothing but a bump in the road which will make them hungrier, more determined and even more focused 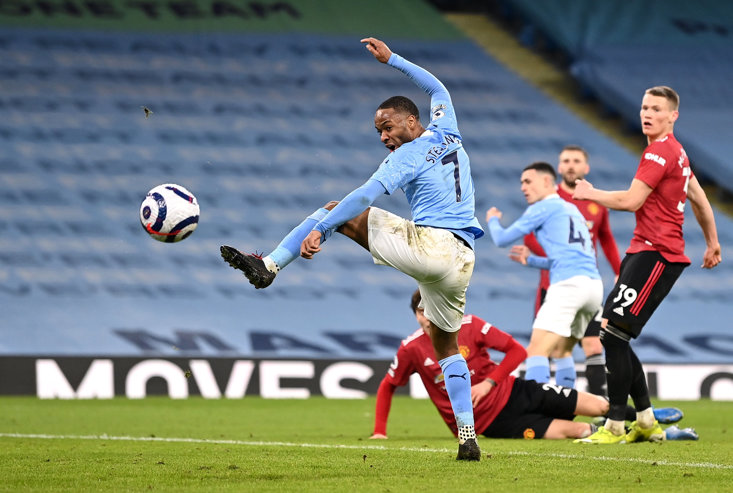 As the hosts missed a first-half chance, Guardiola roared with frustration, put his hands on his head and itched his crown with irritation. The Spaniard is always demanding and striving for perfection but looked just a little more angsty than usual, knowing how big this fixture is to the club and the city.

Kevin de Bruyne made a pass on the half-hour mark which didn’t reach Gabriel Jesus as it was easily snuffed out and the Belgian looked irked. One senses the playmaker could feel things weren’t going to come off. These days can happen. The fact it came against Manchester United made it all the more frustrating and worrisome. More chances came but the goal did not, and City were forced to remember what losing a game of football felt like.

They have been here before though, on the wrong end of derby day; Paul Pogba scoring twice in a 3-2 win for United at the Etihad back in 2018 after City had led 2-0. All it did though was delay the inevitable, and the result didn't matter one jot as City fans celebrated a league title with 100 points. This one won't trouble them too badly either.

Guardiola congratulated United on the victory and will use the loss to push his side on, telling Sky Sports, "We'll talk, because we lost and that will be the news, but the news is we won 21 games in a row. This result is going to help us a lot to understand how difficult it is, we knew, but sometimes you have to lose one game to know."

The loyal fans in the Kippax who supported City in the massive shadow of the Red Devils’ domestic dominance as Sir Alex Ferguson and his charges lifted trophy after trophy in the Nineties would have laughed you out of Manchester had you told them of the glory they would experience in the 21st century. They’d have even gladly lost the derby if it came on the back of a 21-game winning run on the way to the title.

This week won’t be fun for them, but City and their supporters will be smiling come May.