Tennis
News
The 19-year-old's season was dealt another blow as she retired from injury at the Nottingham Open
Conor Keane
18:05, 07 Jun 2022

Emma Raducanu’s participation in this year’s Wimbledon Championships are in doubt after she was forced to withdraw from her Nottingham Open match against Viktorija Golubic on Tuesday with a side strain.

The timing could barely be worse given that a potential mixed doubles partnership with three-time Grand Slam king Andy Murray might have been just what the US Open champ needs.

Since making history as a wildcard entry last September, Raducanu’s life has changed drastically. Suddenly she has to deal with the pressures that come with the expectation that comes with superstardom.

From an outsider to reach tournaments, there were immediately factions of support who expected her to challenge for every title that followed. Some people seem to forget that she still remains in the adolescence of her professional career and that she is not yet the finished article and patience is required to allow her to evolve at her own pace.

It was only at this point last year that she was beginning to make a name for herself, reaching the round of 16 at SW19 before being forced to retire due to suffering from breathing difficulties. Months later she propelled herself to stardom by becoming the first qualifier to win a Grand Slam at the US Open and the first British woman to lift a major since Virginia Wade in 1977.

“It has been a really tricky 12 months to be honest,” Raducanu told BBC Breakfast. “It hasn’t always been easy but I’ve definitely learned a lot about myself and how to go about things, and I would say my approach is definitely different now.” 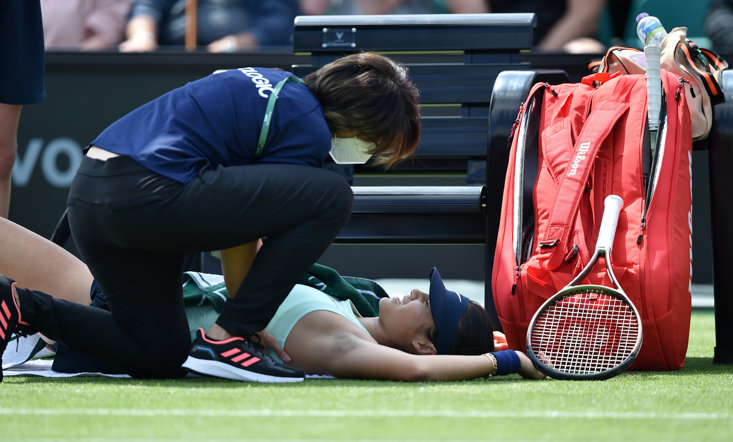 The Bromley-based star has come under fire for a constant changing of coaches in the last year, having recently split from Torben Beltz as she now searches for a fourth mentor. The injury suffered in Nottingham is just another setback which threatens to put on ice what might have been a breakthrough moment in her quest for normality and stability.

Much has been said recently about Raducanu partnering with Murray in mixed doubles in the future and both players seem to be on board with the idea. Raducanu has already said that the 35-year-old is her dream doubles partner and she believes it will happen at some point even if not immediately. She said: “We haven’t actually spoken about it but it is something we feel we both want to do. I’m not sure if this is going to be the year but hopefully it will happen.”

Murray himself has commented on the potential link-up, saying it is something he would like to do. “Last year we talked about it, but we both ended up doing well in the singles. I would love to play with Emma at some stage. I’m sure we will both focus on having good runs in the singles, but yeah - I’d love to do that.”

The potential that this added relationship could have for Raducanu’s development cannot be overstated, especially at this crucial stage in her career. In the world today there is no one who knows better how to handle the added media attention and pressures in the modern game as a British star than Murray. He has also been through it all. His wisdom and experience can help guide her through this tough period off the back of her US Open triumph and, while there is no coach in the picture, there is arguably no better person to act as her mentor at this stage than Murray.

He is someone who Raducanu can relate to as well as being a role model from afar, and that is why the pair working and spending more time together could be beneficial to her development. He’s been through the highs and lows and he will know better than anyone how to overcome such scenarios which will only help his young compatriot in the future as she looks to discover her own unique style of play while balancing her media and public eye responsibilities. His own battles with injury could also be the catalyst for help and advice right now as she comes to terms with this latest setback.

Not only that but it would be great for the fans to see the golden stars of this generation of British tennis playing alongside one another. We know it won’t be long before Murray calls time on his career, and by playing with Raducanu we could witness the metaphorical passing of the torch for her to be the face of tennis in Britain moving forward.

While Wimbledon may be too soon to see this dynamic duo debut, we will count down the days until we get to see them share the court together. First and foremost, though, we can only hope that Emma will be ready for a singles run at the grass season’s flagship event.