Swimming
News
The greatest Olympian of all time only had modest hopes two decades ago...
Simon Lillicrap
08:00, 30 Mar 2021

On this day 20 years ago, the greatest Olympian of all-time burst onto the world stage. Michael Phelps had already made his Olympic bow at Sydney 2000, finishing fifth in the butterfly, but it was at the World Aquatic Championships the following year where the 15-year-old showed the world he truly had something special.

In Japan on March 30 2001, at the tender age of 15 years and nine months, Phelps became the youngest ever swimmer to set a world record smashing the previous record held by Ian Thorpe. The fresh-faced American, with a muscular frame of somebody ten years his senior, had already become the youngest male to make the Olympic swim team for 68 years but it was here that he announced himself on the world stage.

Leading from the front, something that would become a definitive trait of his races, he blew away the rest of the field, beating 6ft 6in countryman Tom Malchow to the gold medal. As a teenager, ‘The Baltimore Bullet’ had one simple goal. He simply wanted to win one gold medal at the 2004 Athens Olympics. By the time the Games came around he was a fully-grown 19-year-old and having improved his other strokes away from the butterfly, he was ready to demolish anybody who stood in his way.

He went home from Greece with six golds and two bronzes, having set one world record and three Olympic records along the way. Phelps had proved himself to be the best in the world, and comparisons to the great Mark 'the Pool Shark’ Spitz had already begun. Spitz, set a seemingly unbreakable record at the 1972 Games when he took home seven gold medals, all in world record time, as he ended his career with a remarkable eleven Olympic medals. Yet in the mid 2000s there was talk that Phelps might just be able to outdo Spitz.

In the precursor to the Beijing Olympics, the 2007 World Championships, Phelps won all seven events that he entered and set five world records in the process. In the form of his life, the chance to blitz the Olympics was well and truly on. At Beijing we got to see the absolute peak of the greatest swimmer of all time. 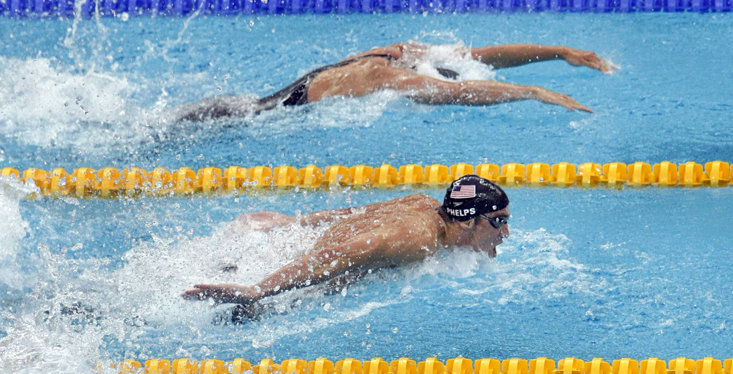 PHELPS RACES TO VICTORY IN BEIJING

He set seven world records, eight Olympic records and took home every single gold medal that was available to him. It was a feat unlike anything else we have ever seen before. He won one race via a photo finish and others by several lengths. After his seventh gold he said, “Dream as big as you can dream, and anything is possible. I am sort of in a dream world. Sometimes I have to pinch myself to make sure it is real.” Then, after Phelps had overturned a deficit to lead the USA relay team to gold to complete the clean sweep, he commented on breaking Spitz’s long-standing record.

“Records are always made to be broken no matter what they are. Anybody can do anything that they set their mind to."

Surely nobody will come close to having a Games quite like Phelps did that summer. Four years later in London he would add another four golds and two silvers, while in Rio 2016 he won another five golds and one silver to add to his collection.

He finished with a frankly ridiculous 23 Olympic gold medals, with 28 in total. To put that in perspective, nobody else in history, male or female has won more than 18. We’ll leave the final words on this one to none other than Mark Spitz.

x
Suggested Searches:
The Sportsman
Manchester United
Liverpool
Manchester City
Premier League
More
swimming
On This Day: 15-Year-Old Michael Phelps Burst Onto The World...
On this day 21 years ago, the greatest Olympian of all-time burst onto the world stage. Michael [ ... ]
swimming
SPOTY 2021: Tom Daley Has Grown Into A Champion Before Our Eyes
Olympic diving champion Tom Daley has grown up in front of our very eyes. Since coming into the national [ ... ]
swimming
SPOTY 2021: Why Adam Peaty Should Take Home The Crown
Nobody dominates their particular sport quite like Great Britain’s Adam Peaty does. There is nobody [ ... ]
swimming
Adam Peaty On The Olympics, Depression, Being A Dad And Drake
Adam Peaty is arguably Britain’s finest modern Olympian. No other member of Team GB dominates [ ... ]
swimming
Does Any Other Athlete Dominate His Sport Like The Untouchable...
Despite winning gold at the Rio 2016 Olympics and breaking his own world record in the process, Adam [ ... ]
swimming
Michael Phelps Has Made Some Interesting Comments
Michael Phelps, the man with a record breaking 23-gold medals, has claimed he never raced against a [ ... ]