A world-class Patrik Schick double spoiled the party at Hampden Park as the Czech Republic sunk Scotland on their first return to major tournament finals. The anti-climactic 2-0 defeat leaves Scotland with a huge mountain to climb, with the Czechs identified by many to be the weakest opponents they will face in Group D.

On an overcast afternoon in Glasgow, the bubble that had engulfed a nation in the build-up to this tournament was truly burst by the visitors, who made their mark in one of the Euros’ toughest groups. Much was expected of Scotland in their first major tournament in 23 years, and, while their performance was not a bad one, they were simply outdone by moments of sheer quality.

The hype ahead of the Euros looked a bit premature when casting an eye over Scotland’s records tournament record in the past, with 10 group failures out of 10 in finals events. The spirit and desire from the Scotland side was there to see as they made their first major tournament appearance since 1998 when most of this squad were just young boys, and the atmosphere was electric, but they were lacking that cutting edge in the final third and the handful of chances they had on the front foot with the scores level, they simply had to take.

They will be particularly disappointed after starting the game the stronger of the two sides, but in the crucial moments the Czech Republic’s quality shone through. The Tartan Army were straight onto the front foot once the game started. John McGinn had the first chance of the game, albeit a half-chance but it did at least bring Hampden Park to life.

As the game opened up, Liverpool’s Andy Robertson was able to move into pockets of space down the left side to do what he does best and float crosses into the box. Veteran goalkeeper David Marshall was called into action to make the first save of the game to deny Schick after Scotland were hesitant to clear their lines, instead trying to play their way out of their third. Already the Scottish hero for getting his nation to the finals with his penalty heorics in Serbia, Marshall was looked ready to deliver a key performance once again. 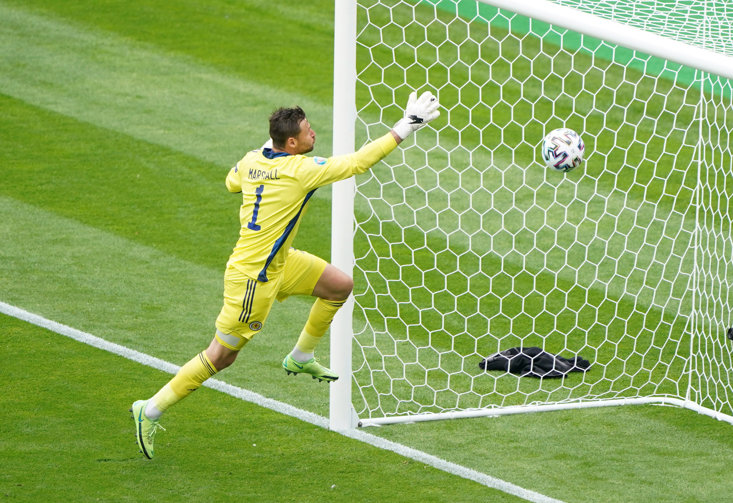 Robertson had the best chance of the half after being slipped in on the left by Ryan Christie but his effort was tipped over the bar by Tomás Vaclík. The resulting corner gave Scotland a penalty appeal after McGinn’s strike on the edge of the area seemingly hit the arm of an on-rushing defender but it came to nothing, and after a very promising first-half display, against the run of play, the Czech Republic opened the scoring.

Schick's header into the far corner following an inviting cross from Vladimír Coufal just before the break was to prove to be the key moment in the game. The visitors had been wasteful with all their set-pieces before the goal but had struck when it mattered.

The Czech Republic started the second half as they finished the first and Marshall was alert to keep out two early efforts, but Scotland’s hearts were broken again when Schick doubled the visitors' lead with a sensational
long-range strike to catch out Marshall and sink the Tartan Army in an early contender for the goal of the tournament. The execution of that strike was nothing short of sensational as he looped the ball over the back-pedalling goalkeeper from just inside the attacking half following the breakdown of a Scotland attack.

The Scots’ heads did not drop as they looked to find a response and get a goal back and they had a quick flurry of chances but it was seeming that it was just not going to be their day.

Clarke, sensing there was still a chance of a comeback, utilised his bench to bring on an array of attacking options such as Ryan Fraser and James Forrest to get the hosts back into the game but there was little success from any of the changes.

After a disappointing afternoon on home soil, Scotland will have to dig deep to find some reserves before facing Gareth Southgate’s England at Wembley on Friday. The 'Battle of Britain' is now a must-win encounter for Steve Clarke’s side if they are to keep their Euro dream alive.