The apple doesn’t fall far from the tree. Professional Fighters League star Dakota Ditcheva is second generation combat royalty. The daughter of former world kickboxing champion Lisa Howarth, ‘Dangerous’ is carving her own path in the world of MMA.

Unbeaten in seven fights, Ditcheva’s next outing will take place on home soil. She will headline the inaugural PFL Europe card on 25th March at the Vertu Motors Arena in Newcastle. Her bout on that show against Clara Ricignuolo is set to be the most high-profile of her career.

The Sportsman conducted an exclusive chat with Ditcheva about life as a famous fighting daughter, her MMA journey so far and PFL’s growth as one of the sport’s biggest players.

Your Mum, Lisa Howarth, is a decorated martial artist in several disciplines. What was it like growing up with a prominent fighter in the house?

I always thought it was really cool having a Mum that fought. In school no one really had sporting Mums. Normally it was the Dad who came from sports and this time it was the Mum. It was just so different.

She definitely helped me get into martial arts in the first place. I've been in the gym since I was four years old because she's had her own gym for over 30 years now. I’ve kind of been born into it. But the transition over to MMA from Thai boxing was my decision. Obviously she supported it. She's always thought I was going to be quite good at it.

How did you find that transition from Thai boxing to MMA from a technical standpoint?

It was quite exciting. I feel like I've always been quite good at Thai boxing because I always say I've got it in the genes. I was kind of just natural to it straightaway. But MMA I felt was a little bit different. It was like learning something from scratch, which for me was quite exciting.

When I first transitioned over to MMA, one of the reasons was that I wanted to start fresh where no one knew me. When I came into Thai boxing, everywhere I went it was like “That's Lisa Howarth’s daughter, she's gonna be dead good”. All eyes were on me so when I went to MMA, I thought I could start fresh and build up. But it kind of took off straight away and everyone still knew who I was.

Jake Paul has signed with the PFL and will be looking at transitioning over, this time from boxing to MMA. Any advice as someone who has made the jump from another discipline?

With him coming from a standing background like I did, I come from Thai boxing, he's coming from boxing, I’d just say to him: takedown defence. Because everyone's going to come and try to take you down. I feel like I still get that now. My Thai boxing is so good that anyone that looks me up is just like “I'll beat her on the floor”. I would definitely recommend he practise his wrestling and his jiu-jitsu, that's for sure. 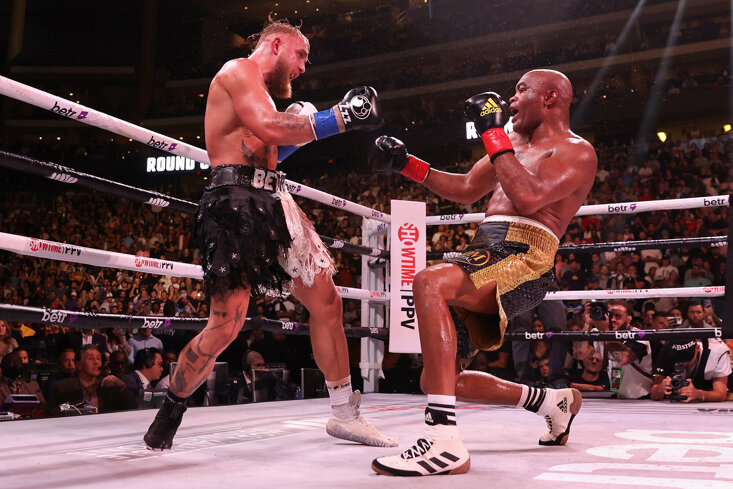 You battled stage fright early in your career. How did you overcome that?

I used to get quite nervous. I cried a few times when I was a kid before getting in the ring. When I got in, I was absolutely fine. But that nervous feeling beforehand, I didn't really cope with it too well as a kid. I think now with all the experience and stuff that I've got I've learned how to deal with it. I still get the same nerves it's just that I understand how to deal with them a lot more now.

You won the Pride of Sport Young Sportsperson of the Year award when you were 17. How did that help your career?

I was really shocked at the time when I got the award. Thai boxing is not really a massive sport that's recognised really. Obviously it's quite a brutal sport so we don't get as much recognition or promotion. But it definitely helped everyone respect the sport a lot more. I feel like people saw it not just as a hobby. They actually respected the fact that I was getting recognised for something that I want to make into a career. I think that was the main thing for me.

How does it feel to co-headline this huge PFL Europe show in Newcastle?

It’s massive. Just to be on a PFL card is massive for me. But then for a female to be a co-headliner is obviously massive. Female martial arts and female sport in general is on a high at the moment. To be part of that growing respect of women in fighting sports is massive. So to be able to co-headline like that is really exciting for me.

As you touched upon there, women in combat sports are going through an incredible period of success. Whether in MMA or boxing, there seems to be more opportunities for female fighters than ever before. What’s it like being at the heart of such an era?

I'm proud to be one of the ones that are pushing it alongside all these great females like Claressa (Shields). She's obviously come over to the UK and headlined that all-girls boxing card, which is massive. She's trying out MMA, she's had a few fights in the Smart Cage.

We headline all these cards and stuff and then we go in the gym the next week and there's more girls coming in. Our gym with me and my Mum being female instructors, we get quite a lot of teenage girls in the gym. That's always a really proud thing to see, that people that are watching us are being inspired by it and coming to the gym the next week.

Role models are vital for getting young people into a sport. Apart from your Mum, who inspired you to want to become a fighter?

I would definitely say my Mum was the main one that inspired me but (also) Valentina Shevchenko she holds the (Flyweight) belt in the UFC at the moment. She definitely really inspired me. She comes from a similar background to me. She came from Thai boxing and she also competed in the same world championships as I did. She was always a really big role model for me.

But when I moved over to MMA I obviously heard about Kayla Harrison and her story. How she won the million two times in a row, she was unbeaten. That was just a big person for me to look up to. Especially because I've signed with the PFL now and I’ve seen her journey. What she's achieved really motivated me to do the same thing.

You’ll be facing Clara Ricignuolo in Newcastle in March, how much do you know about your opponent?

When I got sent the fire through, I recognised the name straight away. We fought on the same card in Canada last January, so I have seen her fight once before. She was actually a really nice girl to be honest. But that doesn't really matter to me whether I know them or not, my job now is to get in the cage and win.

What can a new fan expect from PFL if they’re watching the promotion for the first time?

We're going to be moving on to the next stage of our tournaments after this so we're going to be going out and trying to get the finish. I would think that a lot of fighters are gonna want to end the fights quickly. Expect a lot of intense fighting right from the start.

Brendan Loughnane scooped the featherweight prize in New York last November. What was it like seeing a fellow Mancunian achieve that?

I was more emotional about Brendan’s fight than I was my own. I'd fought on the card earlier. Then to watch Brendan afterwards, even my Mum or Dad… we've watched Brendan's journey right from the beginning and everything he's been through.

It's just crazy to see him finally get to that top stage. It was just everything everyone has wished for him. To see him get what he finally deserves was just amazing.

Do you have a career highlight so far?

Signing with the PFL was just massive for me, that was just something I've been working so hard for. So that was definitely a career high. I call it the breakthrough that I needed. I was still fighting on big shows like UAE Warriors and things like that. I was getting approached by Cage Warriors and stuff, but it was not enough.

I felt like it wasn't the big platform that I had wanted to be on. Then when PFL approached me, I felt like it was the perfect thing. That was definitely a career high moment for me. I felt like I finally got somewhere after all the years of hard work that I'd been putting out.

Definitely unbeaten. 100k richer winning the tournament! I just want to keep pushing it, especially for women, I just want to be that role model for the girls. I always say there's enough success in the world for everyone. I feel like there's so many other girls that have massive talents. So I just want to make sure that I'm building these platforms and helping push them so that everyone else can showcase what they've got to show as well.

Tickets to watch Dakota Ditcheva at PFL Europe in Newcastle on March 25 can be purchased from Ticketmaster at this link.