The battle of Barcelona’s past and present strikers didn’t quite ignite, with neither scoring. But Argentina are through by virtue of a 2-0 win over Poland. The defeated side almost went through on disciplinary points of all things, with all other metrics equal between them and Mexico.. But Saudi Arabia’s injury time consolation against Mexico confirmed their safe passage.

Argentina took to the task like a team knowing they had to secure a result to keep their World Cup flame lit. Nicolas Otamendi headed wide from a dangerous Rodrigo De Paul cross. Lionel Messi, making a record 22nd World Cup appearance for Argentina, went solo on the left and drew an excellent save from Wojciech Szczesny. It wouldn’t be the last time the ex-Arsenal man denied the PSG star.

Messi picked out Marcos Acuna with a beautiful ball out to the left, but the left back snatched at his shot. Argentina’s best early chance arrived when Julian Alvarez’s saved shot trickled as far as Acuna. The Sevilla man’s shot went narrowly wide, drawing gasps from both sets of fans.

The flashpoint of the half came when Szczesny was harshly adjudged to have fouled Messi as the forward jumped for a header. It was a questionable call, but justice would soon be served. Messi’s spot kick was a hospitable height for Szczesny, who pawed it away with authority. It saw the great man become the first player to have two penalties saved in the World Cup. Something tells me that accolade won’t be nudging any of the seven Ballon d’Ors off Messi’s trophy shelf. 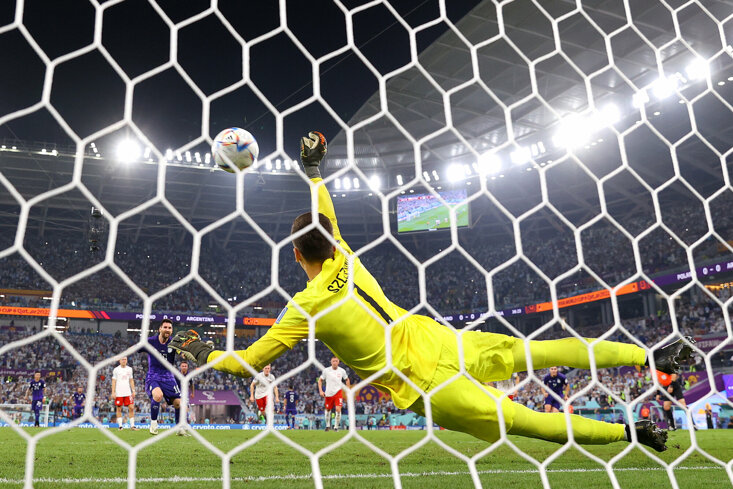 Argentina needed just 59 seconds of the second half to take the lead. Brighton & Hove Albion’s Alexis Mac Allister netted from Nahuel Molina’s pull-back. It was his first goal for Argentina and it could not have come at a better time for his country and their hopes in this tournament. For Poland, the plans they made at half time would be swiftly discarded.

Messi put another chance on a plate for the goalscorer, but Mac Allister couldn’t double up. The Brighton man put his effort too close to Szczesny. But Argentina were proving time and again that they could go up through the gears in a way Poland couldn’t match.

It was another Premier League player that would double Argentina’s lead. Manchester City’s Alvarez unleashed an almighty wallop to clear a path to the knockouts. Enzo Fernandez threaded the needle to find the striker, who powered it home. The strike put Poland level on points, goal difference and goals scored. They were now clinging onto their runner’s up spot in Group C due to their superior disciplinary record to Mexico.

Messi had a chance to shake up the group but his close-range shot was once again kept out by Szczesny. Alvarez raced through to hit the side netting shortly afterwards. Poland were hanging onto their place in Qatar by virtue of their goalkeeper and some wayward finishing.

The idea of every tackle risking a potentially fatal blow to their hopes did not add any great impetus to the Polish performance. At times they even risked conceding again. If Lautaro Martinez had applied a better finish then not even Poland’s friendly approach to physicality would have saved them. Nicolas Tagliafico had a chance cleared off the line by Jakub Kiwior. Poland were flying by the seat of their pants.

They needn’t have worried, with Saudi Arabia’s late, late show seeing them through on goal difference. But Poland and their supporters should worry after this limp performance. Argentina didn’t even need Messi to score in order to comfortably beat them.