Even Sylvester Stallone would not have penned something this far-fetched. WBA ‘regular’ heavyweight champion Trevor Bryan defends his paper title against Jonathan Guidry on Saturday night (29th January). The 17-0-2 challenger is currently ranked 255th in the world by independent body BoxRec, and has fought almost exclusively in backwater club fights. While this sort of ‘Cinderella Man’ narrative works brilliantly on the big screen, in reality it speaks to a number of deficiencies within the sport of boxing.

The first crack in the ‘journeyman fights for the heavyweight title’ narrative derives from the fact this fight is not really for the world heavyweight title at all. We have previously discussed at length why the WBA ‘regular’ title is not worth the leather it's welded to here. The short version is that the WBA in its infinite wisdom crowns both a ‘regular’ and ‘super’ champion in almost every weight category, and that the latter is the only one that should be taken seriously as a world champion. The entire racket is a ploy to garner extra sanctioning fees and no more.

The WBA are at the heart of this most egregious of heavyweight title fights. Guidry is serving as a late replacement for Mahmoud Charr, a former holder of this spurious title who is unable to enter the United States for the fight due to visa issues. A short-notice late replacement can be a tricky slot to fill, but the WBA top 15 features a raft of acceptable options. Number one-ranked Daniel Dubois has previously said he wants to fight Trevor Bryan, and currently has an open calendar. Unbeaten prospect Agit Kabayel, contender Robert Helenius, Britain’s Hughie Fury and ex-champion Andy Ruiz Jr are all also currently available. Instead, Guidry magically appeared in the world rankings last month.

The Louisiana fighter has not fought since August, and has never been ranked before. He has done nothing to add to his credentials since this summer, but the WBA saw fit to elevate him to thirteenth place. This farcical ratings bump took him above Joseph Parker who has just beaten Derek Chisora, and Tony Yoka who is unbeaten and has fought more recently than Guidry. Far from the feel-good story this fight looks to be on paper, it is in fact the result of some underhanded manipulation of the WBA top 15.

A paper championship being challenged for by an undeserving champion, there is a reason this bizarre promotion has flown under the radar. While the world watches the political chess match between Tyson Fury, Anthony Joshua, Oleksandr Usyk and Dillian Whyte to determine the future of the genuine heavyweight championship belts, this fight is only visible on the radar of the most hardcore boxing fans. The fact that what is ostensibly a world heavyweight title fight is serving as an undercard bout to an Ilunga Makabu WBC cruiserweight title defence speaks to the lowly status of the bout. 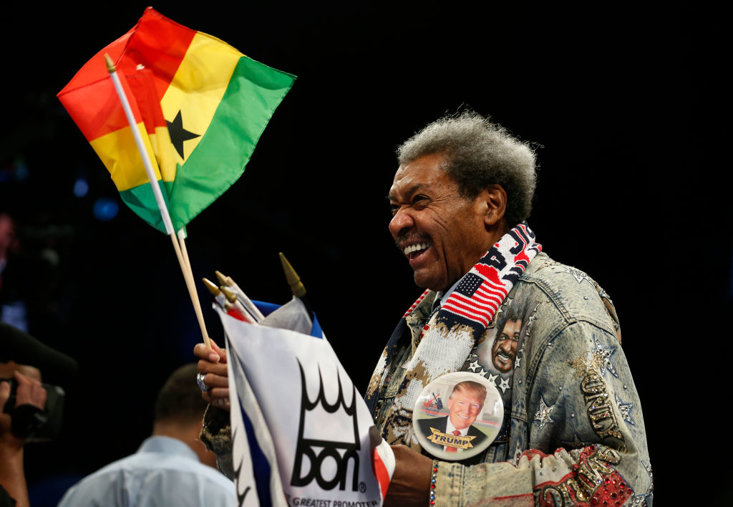 why always him? don king is still causing controversy at 90

At the centre of the storm is promoter Don King, the 90-year-old fight impresario clinging on to the last vestiges of relevance. A titanic figure who once controlled the sport like a puppet master, King is now reduced to squabbling with Charr over contracts, and delivering bizarre match-ups such as this. The scale of the operation has reduced considerably from his Mike Tyson-fronted 1990s heyday, but little else has changed about the flame-haired old promoter.

After a swathe of invective, it feels only fair to search for diamonds in the rough of this match-up. For his part, the 21-0 Bryan is a solid heavyweight. It is a bit of a shame he is stuck boxing in spurious WBA title fights, rather than testing his skills in the deepest heavyweight division in a generation.

There is also intrigue in seeing such an overwhelming underdog fight for a title, however flimsy. Guidry has never contested a bout scheduled for more than eight rounds, and it is hard to begrudge the polite, working class 32-year-old his moment in the sun. The fight brings to mind Tim Tomashek’s 1993 challenge for the WBO title against Tommy Morrison. The Rocky headlines wrote themselves, as the star of the franchises’ fifth entry fought a journeyman who was literally picked from the crowd on short notice. Tomashek fell to defeat in four rounds, but was part of a story that is still told three decades later.

Guidry will surely be dining out on anecdotes of the time he fought a Don King fighter for the heavyweight championship of the world for the rest of his life. There remains a puncher’s chance that he will be successful. The WBA ‘regular’ heavyweight title might not mean much in the grand scheme of boxing, but it would be a life-changing prize for a fighter like Jonathan Guidry. Perhaps that is why this fight matters. It is not a showcase of two of the world’s top heavyweights. It will have zero ramifications for the division at large. But for underdog Jonathan Guidry, whose world would be transformed by victory, it means everything. Real life Rocky, indeed.