Football
News
Lukaku and a Jorginho brace from the spot helped get Thomas Tuchel's men back to winning ways in the Premier League
Kieran Spratt
19:36, 26 Dec 2021

Romelu Lukaku’s return helped Chelsea ensure they didn’t lose any more ground in the title race after coming from behind to beat Aston Villa 3-1 at Villa Park on Boxing Day. It was a much-needed win for Thomas Tuchel’s men, who have come off the boil a little in recent weeks with just three wins in their last eight Premier League games.

With Man City starting to look like they might be in danger of running away with their title defence, following a 6-3 thumping of Leicester City earlier today, Chelsea knew that they could not afford to drift any further from the league leaders.

Villa, who were without Steven Gerrard after he tested positive for Covid-19, have seen a huge up-turn in form since the former Liverpool midfielder’s appointment in November. The Villains had won four of their six Premier League games since his arrival before tonight, and although he wasn’t there in person, Gerrard will have liked what he saw from home as his men started brightly.

The hosts took the lead through a bizarre Reece James own goal shortly before the half hour mark. Matt Targett’s cross from the left landed on the head of James, with no Villa players around him, and flew past Edouard Mendy to break the deadlock. Chelsea were back on level terms from the spot just five minutes later though, after Matty Cash clattered into Callum Hudson-Odoi inside the box. Jorginho stepped up to notch his ninth penalty of 2021.

Romelu Lukaku, whose last Premier League goals were against Villa in September, replaced Trevoh Chalobah at the break. The Belgian’s introduction changed the entire dynamic of the game, allowing Chelsea to dominate the ball better than they had in the first half, and it seemed only a matter of time before they took advantage. Inevitably, it was Lukaku, scoring his seventh in seven against Villa, who found the break. 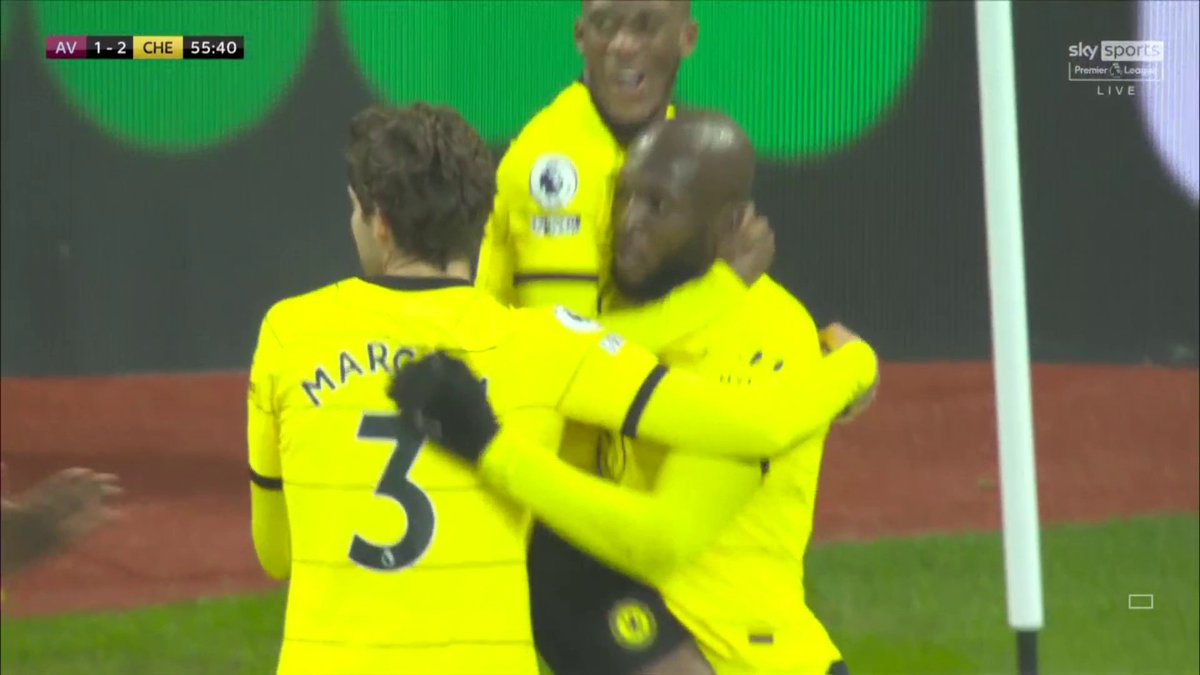 He latched onto a brilliant delivery from Hudson-Odoi and, showing some incredible movement for a big man, found himself in front of Tyrone Mings to glance home. The visitors should have extended their lead through Mason Mount. The England international had gotten in behind Emi Martinez, with just Mings on the line to beat, but dragged his effort wide from 18 yards.

However, Villa weren’t to be beaten easily and found themselves on top for a period as they searched for an equaliser. Their first shot on goal in the match came when Targett found Anwar El Ghazi, but his effort was tame and straight into the hands of Mendy. Hudson-Odoi had an opportunity to wrap up the three points for the London outfit in stoppage time but his low effort was expertly saved by Martinez.

The win was completed with a second Jorginho penalty after Lukaku was brought down by Ezri Konsa. The Brazilian made no mistake to make it ten penalties in a calendar year - a Premier League record, overtaking Matt Le Tissier and Gerrard (9).

It was a huge win for third-placed Chelsea and they still have a glimmer of hope in catching Man City, who are six points ahead. Liverpool, whose game with Leeds today was postponed, remain second on equal points with the Blues, albeit with a game in hand.