The sensational Israel Adesanya puts his UFC Middleweight Championship on the line this weekend in a rematch with Robert Whittaker. The mouth-watering main event headlines UFC 271, a stacked pay-per-view card emanating from the Toyota Center in Houston, Texas.

The headliner is a rematch from UFC 243, where Adesanya and Whittaker met in a title unification. On that occasion, New Zealand’s ‘Bobby Knuckles’ was the reigning 185lb king, while Adesanya held the interim title. ‘The Last Stylebender’ extended his unbeaten record and unified the titles, knocking out Whittaker in the second round. Adesanya’s defensive skills had frustrated the champion all night long, opening up the opportunity for the Nigeria-born artist to lower the boom in spectacular fashion. But will Saturday’s fight be a repeat or revenge?

Whitaker has not lost since that disappointment. Victories against Liverpool’s Darren Till, Jared Cannonier and fellow Adesanya-victim Kelvin Gastelum have kept the deposed champion in the reckoning at middleweight. The latter bout saw Whittaker scoop Fight of the Night in a bout he dominated. It was that victory that put him in the box seat for a shot at his old title belt. 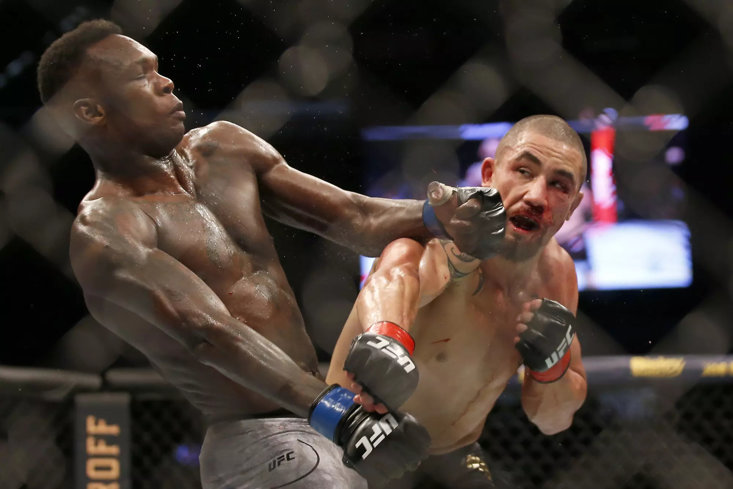 Despite winning their initial encounter, Adesanya has actually had a slightly more mixed time since. The UFC Middleweight king is still untouchable at 185lb, having made three successful title defences since claiming the gold. The most impressive of these was a unanimous decision victory over former champion Yoel Romero that firmly established Adesanya as the middleweight to beat. But it hasn’t just been middleweights trying to beat him, and that is where Israel has come unstuck.

Considered one of the best pound-for-pound fighters in the sport, Adesanya tested this theory by going up to light heavyweight to meet 205lb champion Jan Blachowicz last March. Blachowicz took the play away from his smaller foe with his physicality. A pair of takedowns followed by some late-round ground control saw him take a deserved decision. Adesanya can be admired for his bravery, but the first loss of his career has proved he’s beatable. The question is, can anyone at middleweight do it?

Using the first fight as our guide, you’d have to say that if there is a middleweight alive that can dethrone Israel Adesanya, it is not Robert Whittaker. ‘The Reaper’ is an excellent pro, a former champion who is fully deserving of this chance to reclaim his throne. He hasn’t put a foot wrong since losing the belt, and before that reverse he had not lost in five years. Whittaker is one of those fighters that MMA is all about. Dependable, talented and exciting. But Adesanya resides on another plane altogether.

Israel Adesanya looks like a generational talent. The defining fighter of the modern middleweight division, and considered one of the best strikers on the planet, ‘The Last Stylebender’ is carving out quite a legacy. With his light heavyweight experiment firmly in his rearview mirror, Adesanya can write another line in his future Hall of Fame acceptance speech on Saturday against Robert Whittaker.