Sports
News
On this day in 2002, Serena Williams clinched her first Wimbledon title after beating her sister Venus in the final
TheSportsman
06:55, 06 Jul 2022

Today marks the 20th anniversary of Serena Williams’ first Wimbledon win in 2002. The legendary American tennis player secured the title without dropping a single set along the way and claimed the world no.1 singles ranking for the first time in the process. But what was most notable about that victory was that Serena’s final opponent was two-time defending champion and sister, Venus Williams.

To celebrate this landmark anniversary in the tale of two of tennis’ greatest stars, we look back at other instances of siblings colliding in sport.

Staying on the court for our first entry, Andy and Jamie Murray have played with one another numerous times over the years, first combining at a senior level in 2005. However, in 2015 the two brothers went head-to-head, with Jamie and regular partner John Peers beating Andy and Leander Paes in the second round of the Rogers Cup in Montreal.

Despite finding themselves in the same Manchester United and England sides for a significant chunk of their careers, the two Neville brothers found themselves up against each other when Phil joined Everton in 2005. In fact, Fizzer’s debut for the Toffees was against United with his older brother lining up against him. The Red Devils won that game 2-0. 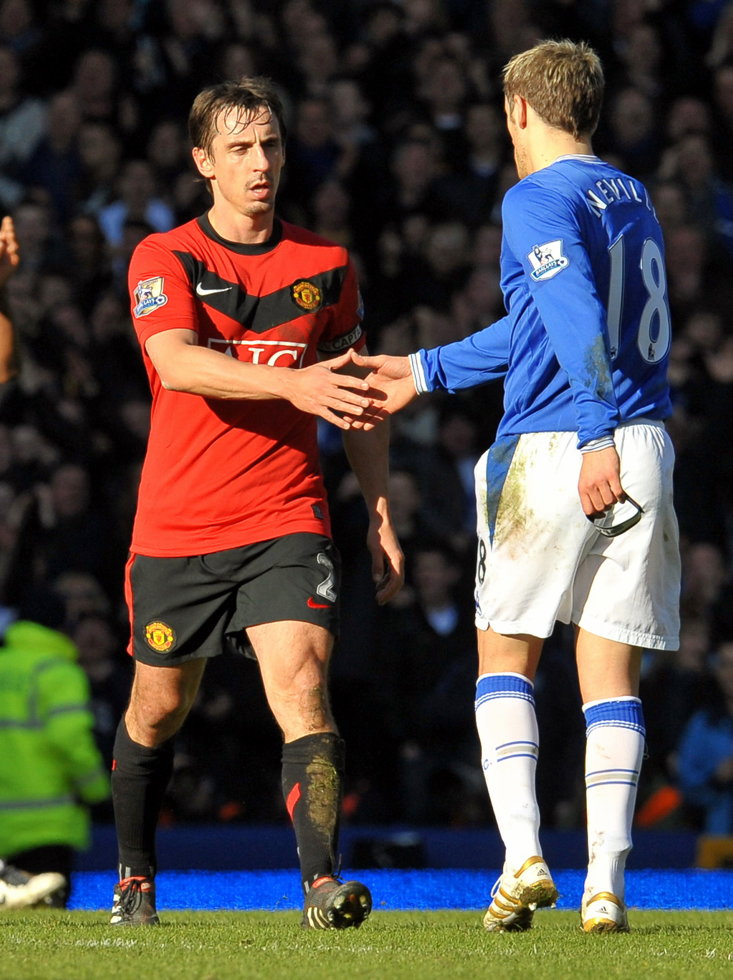 There was only one winner between these two, with Michael’s 91 Grand Prix wins absolutely dwarfing Ralf’s six. However, Ralf did manage to get one up on Michael at the 2001 Canadian Grand Prix which he won despite his older brother starting in pole position. It is the only time in F1 history two brothers have completed a one-two

In 2010, World Cup history was created when these two walked out for different countries to face each other - Kevin-Prince for his country of birth, Ghana, and Jerome for Germany. Younger brother Jerome emerged with the bragging rights after Die Mannschaft won 1-0. The two nations and brothers collided again in 2014 in the same group, this time drawing 2-2.

Regarded as one of WrestleMania’s greatest opening matches ever. At the tenth edition of the annual bonanza in 1994, former WWE Champion Bret Hart faced off against Owen Hart, who had turned heel against his brother just a few months earlier. This encounter, lasting just over 20 minutes, concluded when Owen rolled up an unsuspecting Bret for the three-count.

Famously traded for one another in 2008, Pau and Marc Gasol are NBA royalty with three rings, nine All-Star appearances, six all-NBA berths between them. They faced each other a total of 35 times in NBA games, with Pau holding a 22-13 winning record over Marc, including a 4-2 record in playoffs.

x
Suggested Searches:
The Sportsman
Manchester United
Liverpool
Manchester City
Premier League
More
sports
The Sportsman's Weekend Accumulator: Coutinho, Stockport And...
The Sportsman is back for another weekend accumulator and this time, we’ve got our experts on [ ... ]
sports
The Sportsman's 16/1 Weekend Acca Including Boxing, Football,...
It has been a long time since we last put one of these together but The Sportsman’s acca [ ... ]
sports
Brilliant For Birmingham: BBC's Ayo Akinwolere Can't Wait For...
The Commonwealth Games returns to British soil this week, with a 10-day celebration of athletic achievement [ ... ]
sports
WATCH: Hot-Dog Eating Champ Joey Chestnut Chokes Out Protestor...
The current sporting world is littered with all-time greats; Tom Brady, Lionel Messi, Cristiano Ronaldo, [ ... ]
sports
Hustle And The Best Sports Films Currently On Netflix
The Adam Sandler renaissance is in full-swing with the Happy Gilmore star’s latest effort, Hustle, [ ... ]
sports
WWE’s Class Of 2002: Two Decades of Dominance, Inside and Outside...
In 2002, just over a year removed from the ‘Monday Night Wars’ between his World Wrestling [ ... ]
sports
Muhammad Ali And The Greatest Trash-Talkers In Sport
Today marks six years since we lost the great Muhammad Ali. Boxing’s most beloved star was as [ ... ]
sports
What Did The World Of Sport Look Like When Queen Elizabeth's...
Queen Elizabeth II celebrates her Platinum Jubilee this week and to commemorate the occasion, we have [ ... ]
sports
Dream Weekend Turns Sour As Huddersfield Fail In Challenge Cup...
It was meant to be the perfect sporting weekend for the town of Huddersfield. With their football and [ ... ]
sports
Monaco, The Masters And More Unbelievable Experiences In Sport
This weekend sees the Formula One teams, fans and staff arrive in the principality of Monaco for the [ ... ]
sports
Tony Hawk's Impact On The World Of Skateboarding Cannot Be Understated...
In the Smithsonian, a baby blue Bahne skateboard sits proudly on display as part of the National Museum [ ... ]
sports
The Saudi Golf League And Other Breakaway Competitions In Sport
There appears to be a civil war looming in golf as the PGA Tour continues to fight back against the [ ... ]
sports
Britain's Top Ten Greatest Sporting Achievements Featuring Roger...
Four minutes. One mile. The seemingly unbreakable human barrier was brought tumbling down by Roger Bannister [ ... ]
sports
Triple H’s Legacy Lies With WWE’s Next Generation
All that remained was a pair of black boots. Black boots that signified the end as they stood proud [ ... ]
sports
Kevin Owens’ History-Making WrestleMania Match With Steve Austin...
The well trodden adage surmises that heroes are worth avoiding, should you ever be presented with the [ ... ]
sports
The Deadman Didn't Rise: Revisiting The End Of The Undertaker’s...
75,167 people can be just as deafening when they are dead silent as when they are roaring in unison. [ ... ]
sports
The Barkley Marathons: The 100-Mile Race That Broke All Of Its...
In 1977, James Earl Ray, the gunman behind the assasination of Martin Luther King Jr., embarked on an [ ... ]
sports
International Women’s Day: Ten Female Superstars To Watch Out...
In honour of this year’s International Women’s Day, we take a look at ten female sports [ ... ]
sports
How Sport Is Handling The Russian Invasion Of Ukraine
The Russian invasion of Ukraine has cast a shadow over our world, with an uncertain darkness hanging [ ... ]
sports
2022 Commonwealth Games: Eight Stars To Look Out For In Birmingham
In just 150 days, the eyes of the world will be fixated on Birmingham for the 22nd Commonwealth Games, [ ... ]
sports
Looking Back At The Most Calamitous Sporting Performances In...
There is nothing worse when it comes to being a professional athlete than when you have a performance [ ... ]
sports
Talent In Tartan: Why 2022 Could Be The Year Of The Scots
Scottish sport thrived in 2021, with star athletes from north of the border making waves on a global [ ... ]
sports
World Cup, Six Nations And Winter Olympics: The Must-See Sporting...
With the haziness of the New Year celebrations behind us, it is time to clear our minds and look ahead [ ... ]
sports
Most Significant Sporting Moments Of 2021: From Fury's KO To...
Sport makes us feel things. This year, we have witnessed a whole array of emotions from England’s [ ... ]
sports
Euro-Mania, Formula One Fireworks And The Best Sporting Moments...
Despite the ever-looming menace that is Covid, the past year has been an unforgettable one in the world [ ... ]
sports
Remembering The Iconic Sports Stars We Lost In 2021
As we bid farewell to 2021, there is an air of hope as we look ahead to what 2022 might bring in the [ ... ]
sports
From Lineker To Ali’s Legacy: The Sportsman’s Favourite Articles...
What a year it's been in the world of sport! Despite all the ongoing uncertainty surrounding the [ ... ]
sports
Olympic Dreams Realised, Football Justice Done: The Sportsman...
It has been an incredible year of sporting drama and intrigue. With 2021 almost in our rearview mirror, [ ... ]
sports
Football In The Trenches, Shaq Vs Kobe & Christmas Day's Special...
Sport and Christmas Day don’t mix, at least that’s what you’ve been programmed to [ ... ]
sports
Mammoth Upsets, Fairytales and History-Makers: The 2021 Sportswomen...
Despite the ever-looming menace that is Covid, the past year has been an unforgettable one in the world [ ... ]