Sports
News
This weekend, Hapthor Bjornsson will attempt to break Hall's 2016 deadlift record from his own garage
Ross Brown
09:00, 01 May 2020

This Saturday, in a small garage in Reykjavik, Iceland, the hugely affable, 6ft 9inch strongman, Hafor Björnsson, will attempt to do what no other man on earth has done and deadlift 501kgs. It’s brave, it’s foolhardy and, in Hafthor’s case, it’s controversial.

The current record of 500kgs was set four years ago by British strongman, Eddie ‘The Beast’ Hall, during the 2016 Europe’s Strongest Man competition, in front of 10,000 people at the First Direct Arena in Leeds, UK. Earlier that day Hall had already set the new deadlift world record at 465kgs, and when he asked for 500kgs to be set, all in the arena were excited, but few were confident.

Hall strapped himself to the bar and stood, acknowledging the crowd as blood poured from his nose, before collapsing to the floor. “That nearly killed me,” he acknowledged afterwards. "The pressure on my body was surreal. I passed out after. I had nose bleeds. It’s not healthy doing something like that.”

It’s a record that has irked Björnsson for almost half a decade. He and Hall are not friends, and have used social media as a modern battle ground, insulting, goading and impressing each other in equal measure. But it’s this attempt which has seen open warfare develop between the two, centred squarely on Hafthor’s chosen location - his garage.

Six months ago, the roadmap was simple enough. Björnsson would enter the World’s Strongest Man, and under strict competition rules attempt (and probably break) the record set by Eddie. But the Coronavirus has put paid to all that and, rather than wait, Hafthor has decided to carry on regardless. In doing so, he shines a spotlight on an interesting area of Strongman competitions: there is no governing body that regulates the sport.

Almost all sports, from football to table tennis are regulated. If you want to set a world record, you have to do it under strict conditions. Strongmen find themselves under no such jurisdiction, if they want to break a record, they can head to their garage, and Eddie Hall is unimpressed, stating on social media: “Absolutely no legitimate sport would acknowledge world records broken out of competition and you are undermining the very sport you are claiming to be champion”. 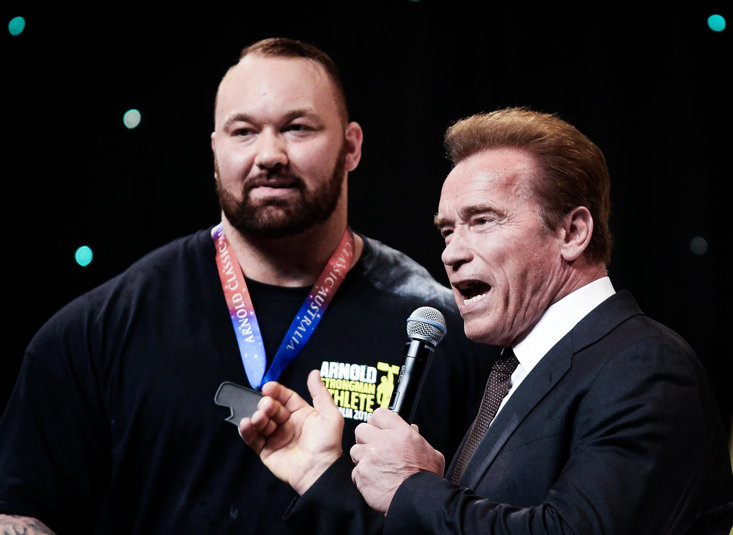 The Mountain And The Terminator

That doesn’t mean that Björnsson is going to wander into his garage and stroll out saying, “I did it”. His attempt will be closely scrutinised by fellow Icelandic strongman (and head judge for World Strongest Man), Magnus Ver Magnusson who will be right there in the garage with him, and of course the entire event will be live-streamed out of Iceland to a huge global audience.

Can he do it? Saturday will tell. Björnsson believes this is just the start, and he will move rapidly on to lifting 520kgs. If he does, we will enter a new era of man mountains but regardless, it’s unlikely Hall will acknowledge the record, stating in a press release aimed directly at Hafthor: “Because of the malicious rumours Thor and his team started I’ve endured years of people questioning what is the crowning achievement of my career. Well guess what pal, you break my record in your home gym with a bunch of your pals, you’re going to get the same treatment."