On the final weekend before Christmas we witnessed a bumper package of sporting prowess, there was history made in boxing and in football, plus the latest comeback from a tennis great and the first glimpse of a potential future golf star. Here are five sports stories you may have missed…

It’s official. There has never been a middleweight boxing champion like Gennady Golovkin. The Kazakhstani superstar stopped Kamil Szeremeta in the seventh-round of their meeting in Hollywood, Florida on Friday to become the first boxer ever to successfully defend a middleweight title 21 times. 21 times!

The IBF and IBO champ is showing no signs of stopping either, even at the age of 38. Promoter Eddie Hearn told DAZN after the fight, “He’s got plenty more gas in the tank. He’s the most exciting boxer in world boxing still, has devastating power in both hands. We want to see him in the megafights next year.”

For those of us hoping there might be a third fight with Canelo Alvarez, that’s music to our ears.

Fact number one: AC Milan have made their best start to a Serie A season in 17 years. Fact number two: It probably took you longer to read that first fact than it took them to score on Sunday.

Rafael Leao’s blistering strike in just 6.2 seconds was the fastest goal in Serie A history, beating the relatively snail-like effort of Piacenza’s Paolo Poggi inside eight seconds against Fiorentina in 2001.

The Sassuolo defence opened up all too quickly for Leao following Hakan Calhanoglu’s drive forward direct from the kick-off, and Milan were on their way to a 2-1 win before many supporters had even had the chance to get comfortable. Our money is on Zlatan Ibrahimovic trying to go one better the moment he returns from injury for the Rossoneri. 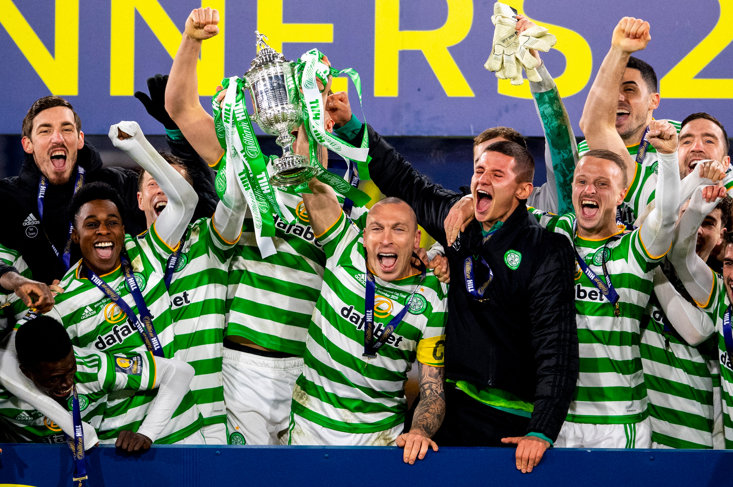 It is one of those very 2020 scenarios which saw the 2019-20 Scottish Cup final taking place on Sunday, more than seven months after originally scheduled, but it was worth the wait for Celtic as they overcame Hearts on penalties after a 3-3 draw to clinch their fourth successive domestic treble.

The Bhoys squandered a two-goal lead in normal time and a 3-2 advantage in extra time before going behind in the shoot-out when Ryan Christie was denied by Craig Gordon, but two saves by young keeper Conor Hazard ensured that Celtic reigned supreme once more.

The one bit of bad news for Celtic is that they cannot do a quintuple-treble, having already been knocked out of the 2020-21 Scottish League Cup by Ross County, while they also sit 16 points behind leaders Rangers in the Scottish Premiership.

Andy Murray wins on his Battle of the Brits return

It has been two months since he last played, but former world number one Andy Murray returned to the court in style on Sunday as he beat Dan Evans 7-6, 6-4 in the Battle of the Brits tournament in Roehampton.

Having not played since sustaining a pelvic injury in Cologne in October, Murray bounced back with a straight sets triumph over the British number one in the first match of the league event, which ends on Wednesday.

The win was a great start to Murray’s preparations for the 2021 Australian Open, which has been delayed by three weeks until mid-February as a result of ongoing Covid-19 concerns.

“I don’t think words can describe it. Just the fact that we were able to have this experience together, Charlie and I… those are memories for our entire lives.” That was what an emotional Tiger Woods had to say on Sunday after the golf legend and his 11-year-old son Charlie finished seventh in a two-day exhibition event in Florida.

We’d all seen the video of them practicing almost identical swings together in the build-up to the event, which is for major golf winners and a selected family member, but Charlie and Tiger shot a 20-under-par 124 over the two days to come in five shots behind the winners, Justin Thomas and his father Mike.

Charlie became the youngest player in the event’s 25-year history, and left an almighty impression while he was at it. Quality is clearly in the Woods genes.