The UFC returns to pay-per-view on Saturday night with a stacked card emanating from the T-Mobile Arena in Las Vegas, Nevada. The show boasts two world title fights, plus the return of trash-talking veteran Nick Diaz, an exciting clash between heavyweight contenders and the next chapter for a former Women’s Strawweight champion. Here’s why UFC 266 is the perfect show to watch when Anthony Joshua vs Oleksandr Usyk finishes on Saturday night.

Usually it is customary to start with the main event first, but in truth even the UFC seem to view this as the real headliner here. They have even increased the round limit to the championship five for this fight, only the second time a non-title undercard bout has been extended this way in company history.

Nick Diaz is one of the most popular fighters in MMA, and is returning to the Octagon for the first time since his 2015 fight with Anderson Silva. Diaz was banned after that fight when his post-fight test showed traces of marijuana, and much of his lay-off was spent battling these sorts of charges as well as personal issues. In Lawler he faces a veteran who has also been inactive, having fought just twice in the last two years. Always good value when he does step into the cage, the former UFC Welterweight champion will be looking to spoil Diaz’s homecoming.

The pair have met before, a staggering 17 years previously. At UFC 47, Diaz scored a second-round knockout over Lawler. The fact that fight was so long ago means it is far from a reliable form-guide for Saturday’s contest, and Nick’s six-year hiatus is likely to take its toll. Either way, the fight should deliver thrills. Both men like to stand and trade, and the atmosphere is likely to be electric for Diaz’s return.

Volkanovski makes his second defence of the Featherweight championship, while looking to extend his winning run to 20 fights against a live challenger in Brian Ortega.

Ortega has been here before, incurring a doctor stoppage in a Fight Of The Night with then-champion Max Holloway in 2018. Out of the cage for nearly two-years, no thanks to the pandemic, ‘T-City’ showed tremendous improvements in his striking game when decisioning ‘Korean Zombie’ Chang Sung Jung last time out. With championship experience in his locker, and necessary adjustments made, Ortega is a real threat to Volkanovski’s title. 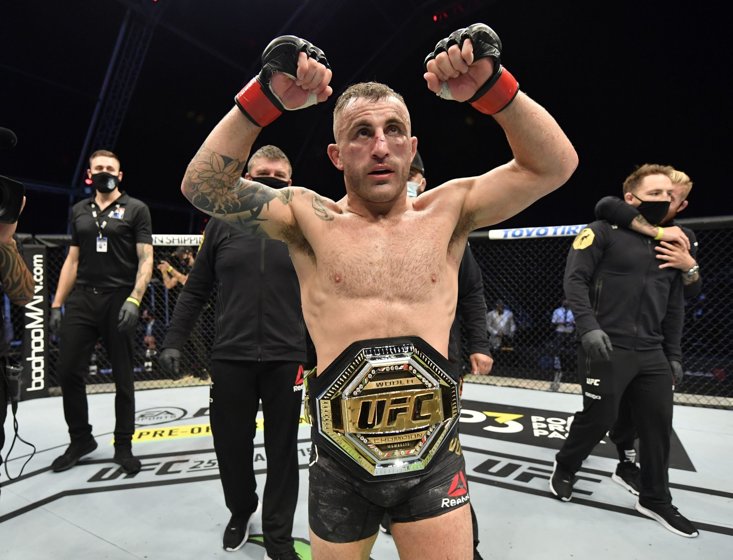 VOLKANOVSKI MAKES HIS SECOND DEFENCE OF HIS CHAMPIONSHIP

Coming off back-to-back decision wins over Holloway, Volkanovski was settling well into the role of champion. However, just a week before this contest was originally scheduled the fighter contracted COVID-19. The infection spread to his lungs, and Alexander contracted pneumonia. Now fully recovered, there remains a chance his battle with illness will affect him on fight night. Hopefully the pandemic is a non-issue and we get to enjoy these two top featherweights at their peak in the main event.

Shevchenko is making the sixth defence of her UFC Women’s Flyweight championship, looking to extend her dominant run of form against Lauren Murphy. The former Muay Thai competitor and boxer has scored eye-catching stoppages over Jessica Eye, Katlyn Chookagian and Jessica Andrade during her reign.

Murphy comes into the fight as a huge underdog, but deserves her shot after amassing a five-fight winning streak. Two of those victories were by split decision, and Murphy is a fighter who often looks to edge out close fights. Shevchenko is a front-runner and is unlikely to give her that opportunity.

An exciting match-up between the fourth and sixth-ranked heavyweight contenders, this could end up being a striking vs wrestling collision. Rozenstruik brings elite-level kickboxing into the cage, with stoppages of former heavyweight champion Andrei Arlovski and Brock Lesnar-conqueror Alistair Overeem on his record. Cyril Gane managed to outpoint the Surinamese fighter in February, but Jairzinho rebounded quickly by scoring a TKO over Augusto Sakai in June.

His opponent was stopped by Derrick Lewis last time out, and needs a win to re-establish himself in world title contention. Wins over Overeem, hard-hitting Mark Hunt and former UFC Heavyweight champion Junior Dos Santos jump off his record, and he will hope to recapture that form this Saturday.

x
Suggested Searches:
Manchester United
Liverpool
Manchester City
Marcus Rashford
Premier League
More
ufc
Three Main Events And A Soda: UFC To Finish 2021 With A Bang
It’s been quite the year for the Ultimate Fighting Championship. The return of fans in Jacksonville [ ... ]
ufc
Dern Return: The UFC Fight Night 194 Preview
The UFC Apex in Las Vegas, Nevada hosts a huge women’s strawweight clash on Saturday when Mackenzie [ ... ]
ufc
2020 Breakout Star Kevin Holland Has It All To Lose in 2021
2020 was a year most of humanity would like to forget. But while the rest of us were locked down in [ ... ]
ufc
Where? When? How To Watch? Everything You Need To Know About...
The UFC returns to pay-per-view this weekend with a stacked card. There are two world title fights, [ ... ]
ufc
UFC Fight Night 192: Light Heavyweights Lead The Way In Nevada
The UFC returns this Saturday with Fight Night 192, two weeks removed from Liverpool’s Darren [ ... ]
ufc
For Whom The Bell Tills: What Next For ‘The Gorilla’?
Darren Till’s third-round submission loss to Derek Brunson on Saturday night has left the Liverpool [ ... ]
ufc
Viva Scouse Vegas: Liverpool’s MMA Royalty Descends On Nevada
The UFC Apex in Enterprise, Nevada is bracing itself for a British invasion on Saturday night, as the [ ... ]
ufc
Chikadze vs Barboza: Georgia’s Skilled Striker Faces Tough Test...
Giga Chikadze might’ve began his UFC career with a loss, but since his shortcoming on Dana White’s [ ... ]
ufc
UFC Fight Night Sees The British Take Over Las Vegas Led By...
The stage has been set for the UFC to return to the UK since Jorge Masvidal’s famous knockout [ ... ]
ufc
Usman vs Covington II Heading To UFC 268 As Leon Edwards Misses...
A busy week for the UFC began with the announcement of a Welterweight title defense and a highly-anticipated [ ... ]
ufc
What Next For Conor McGregor After UFC 264 Loss To Dustin Poirier?
Conor McGregor’s future has been left up in the air after he suffered his second defeat in six [ ... ]
ufc
Your Guide To UFC 264 As Conor McGregor And Dustin Poirier Clash...
The much-anticipated trilogy between Conor McGregor and Dustin Poirier goes down on Saturday, July 11 [ ... ]
ufc
Who Is Conor’s McGregor's UFC 264 Opponent Dustin Poirier?
Dustin Poirier will take on Conor McGregor inside the Octagon for a third time at UFC 264 this [ ... ]
ufc
From Notorious Knockouts To Ruthless Rivalries, McGregor's Best...
Conor McGregor, the UFC’s divisive poster boy, returns to the cage on Sunday morning at UFC 264 [ ... ]
ufc
From Biggie To Joe Frazier, Rating Conor McGregor's Most Notorious...
Conor McGregor makes his return to Octagon on Saturday night when he takes on Dustin Poirier for a third [ ... ]
ufc
UFC 264: Everything You Need To Know Ahead Of Conor McGregor...
Conor McGregor and Dustin Poirier will be going at it for a third time this weekend, headlining a stacked [ ... ]
ufc
Your Guide To UFC 263, As Israel Adesanya Takes On Marvin Vettori
UFC 263 rolls into Arizona this weekend, with the small matter of a rematch between Israel Adesanya [ ... ]
ufc
Charles Oliveira Could Fight Conor McGregor In Brazil After...
Brazilian superstar Charles Oliveira could take on Conor McGregor in his homeland after he pulled off [ ... ]
ufc
UFC 262 Preview: A New Heir To The Lightweight Throne Will Be...
It’s been more than three years since we have seen anyone other than Khabib Nurgmagomedov wear [ ... ]
ufc
UFC 261: Jorge Masvidal Suffers First Knock Out As Kamaru Usman...
If the build-up to UFC 261 was hyped up, the night itself exceeded all expectations. In a stunning main [ ... ]
ufc
Kamaru Usman Hints He Could Walk Away After UFC 261 Clash With...
UFC welterweight champion Kamaru Usman has suggested he could walk away from the Octagon after his main [ ... ]
ufc
UFC 261: All You Need To Know Ahead Of A Blockbuster Night In...
Fight fans are in for a real treat in the Octagon this weekend with UFC 261 serving up a blockbuster [ ... ]
ufc
Conor McGregor Cancels Dustin Poirier Trilogy Due To Dispute...
Conor McGregor has insisted his trilogy fight with Dustin Poirier is off after the pair were involved [ ... ]
ufc
New Lightweight Champion To Be Crowned At UFC 262 After Khabib...
It is looking increasingly likely that a new lightweight champion will be crowned at UFC 262 with Michael [ ... ]
ufc
UFC Set To Return In Front Of A Full Crowd With A Stacked Card...
After more than a year of coronavirus-induced capacity restrictions, the UFC is set to finally return [ ... ]
ufc
Four Champions And Three Undisputed Titles On The Line At UFC...
UFC 259 features four champions, as middleweight king Israel Adesanya moves up to 205lbs to battle the [ ... ]
ufc
Bold, Brash And Wealthy, Has Conor McGregor Simply Become Too...
Big and tough as he was, King Kong needed the Empire State Building; the big Silverback just wouldn’t [ ... ]
ufc
Everything We Know About Dana White And The UFC's Fight Island...
Ultimate Fighting Championship president Dana White has been vocal in his commitment to holding UFC [ ... ]
ufc
How Anime Fuelled Israel Adesanya's Ambition, Ability And Style...
Every so often, in every sport, a truly unique character arrives with seemingly the sole purpose of [ ... ]
ufc
Is Banking £1.5Million Per Second Enough To Keep Conor McGregor...
Find someone who looks at you the same way Dana White looks at Conor McGregor. Dana needs Conor. He [ ... ]