The UFC returns this Saturday with Fight Night 192, two weeks removed from Liverpool’s Darren Till suffering a third-round submission defeat to Derek Brunson. The main event features former UFC Light Heavyweight title contender Anthony Smith against 11th-ranked Ryan Spann, in a fight that could have big ramifications at 205Ib. Here’s a rundown of all the major action set to take place from the UFC Apex in Enterprise, Nevada.

‘Lionheart’ Anthony Smith suffered a career down-turn after taking pound-for-pound great Jon Jones five rounds for the UFC Light Heavyweight Championship in 2019. The Texan was brutally stopped by Glover Texeira and decisioned by Aleksandar Rakic after his title defeat, and Smith looked to be in for a bleak winter in 2020. He rebounded with a submission win over Devin Clark in November before stopping Jimmy Crute in April of this year. Smith has spoken of how fighting further down the rankings has helped him rebuild, and is coming into this fight looking to re-establish himself in the title picture. 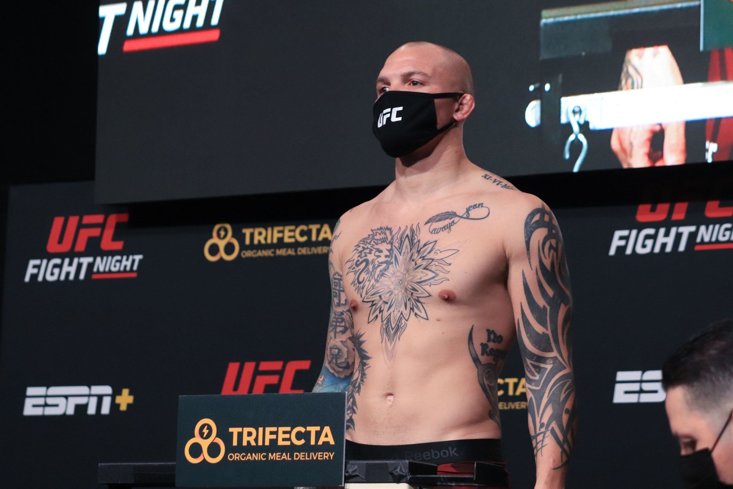 His opponent carries his own title ambitions, and Ryan Spann has gone the right way about it with a 5-1 record since joining the UFC in 2018. ‘Superman’ scored a UFC contract by choking out Emiliano Sordi on Dana White’s Contender Series. His last Octagon victory was an eye-catching one, earning a Performance of the Night for his first-round TKO of Misha Cirkunov. Spann also carries a standout win against Antônio Rogério Nogueira on his record, and boasts a dangerous submission game as well as dynamite in his fists.

Another fight that will have an impact on the state of the 205Ib division, the co-main event features two fighters looking to return to winning ways. Cutelaba is winless in three fights, though he did arrest a two-loss slump by drawing with Dustin Jacoby last time out. The Moldovan was supposed to fight Devin Clark on that night, but the ‘Brown Bear’ withdrew with an injury. ‘The Hulk’ gets his belated chance to face the American here.

Clark’s last fight came against Fight Night 192 headliner Anthony Smith, where he lost to a first-round triangle choke. His form before that ESPN main event was decent, racking up a pair of decision wins since a 2019 loss to this show’s other headliner, Ryan Spann. A card main-evented by two of his former conquerors is the perfect stage for Clark to re-assert himself as a force in the division. 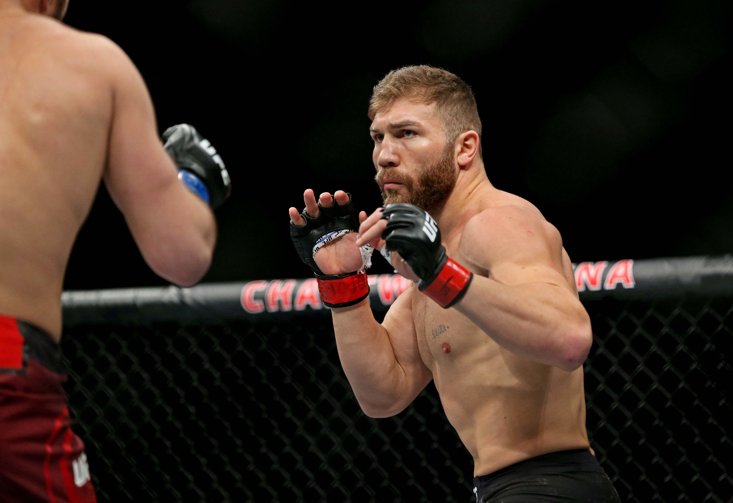 Nikolas Motta’s UFC debut was supposed to come against the man who has the joint-most UFC fights in history, Jim Miller. Instead he will be facing a fellow debutant in Cameron VanCamp, after Miller withdrew due to a positive COVID test.

‘Iron Motta’ fought his way into the organisation through Dana White’s Contender Series, decisioning Joseph Lowry last year. He now faces a tricky late adjustment from facing a veteran fighter he was training for, to a relative unknown quantity.

VanCamp carries a 15-5-1 record, with the standout name on his ledger being former UFC fighter Bobby Voelker, who defeated him in 2019. However, he has strung together four wins since then for various independent organisations, and with 60% of his wins coming by submission he is a danger on the mat. Motta is still the pick in this one, but he faces a live underdog after less-than-idea preparation.

American Top Team’s Muay Thai standout Ariane Lipski faces Mandy Bohm in the women’s flyweight division. This fight was scheduled to take place on the Till vs Brunson card, but Bohm withdrew through illness.

Bohm holds an unbeaten record of 7 wins and 1 no-contest, picking up her last victory in Bellator against Griet Eeckhout. She takes her Octagon bow against a fighter who was stopped in her last two outings, but carries knockout power with 6 of her 13 wins arriving via stoppage.

This has all the makings of a true crossroads fight, the unbeaten debutant facing the seasoned UFC fighter. Lipski knows that a loss here could be fatal for her tenure with the company, while Bohm will want to make a dominant first impression on the big stage.

x
Suggested Searches:
Manchester United
Liverpool
Manchester City
Marcus Rashford
Premier League
More
ufc
For Whom The Bell Tills: What Next For ‘The Gorilla’?
Darren Till’s third-round submission loss to Derek Brunson on Saturday night has left the Liverpool [ ... ]
ufc
Viva Scouse Vegas: Liverpool’s MMA Royalty Descends On Nevada
The UFC Apex in Enterprise, Nevada is bracing itself for a British invasion on Saturday night, as the [ ... ]
ufc
Chikadze vs Barboza: Georgia’s Skilled Striker Faces Tough Test...
Giga Chikadze might’ve began his UFC career with a loss, but since his shortcoming on Dana White’s [ ... ]
ufc
UFC Fight Night Sees The British Take Over Las Vegas Led By...
The stage has been set for the UFC to return to the UK since Jorge Masvidal’s famous knockout [ ... ]
ufc
Usman vs Covington II Heading To UFC 268 As Leon Edwards Misses...
A busy week for the UFC began with the announcement of a Welterweight title defense and a highly-anticipated [ ... ]
ufc
What Next For Conor McGregor After UFC 264 Loss To Dustin Poirier?
Conor McGregor’s future has been left up in the air after he suffered his second defeat in six [ ... ]
ufc
Your Guide To UFC 264 As Conor McGregor And Dustin Poirier Clash...
The much-anticipated trilogy between Conor McGregor and Dustin Poirier goes down on Saturday, July 11 [ ... ]
ufc
Who Is Conor’s McGregor's UFC 264 Opponent Dustin Poirier?
Dustin Poirier will take on Conor McGregor inside the Octagon for a third time at UFC 264 this [ ... ]
ufc
From Notorious Knockouts To Ruthless Rivalries, McGregor's Best...
Conor McGregor, the UFC’s divisive poster boy, returns to the cage on Sunday morning at UFC 264 [ ... ]
ufc
From Biggie To Joe Frazier, Rating Conor McGregor's Most Notorious...
Conor McGregor makes his return to Octagon on Saturday night when he takes on Dustin Poirier for a third [ ... ]
ufc
UFC 264: Everything You Need To Know Ahead Of Conor McGregor...
Conor McGregor and Dustin Poirier will be going at it for a third time this weekend, headlining a stacked [ ... ]
ufc
Your Guide To UFC 263, As Israel Adesanya Takes On Marvin Vettori
UFC 263 rolls into Arizona this weekend, with the small matter of a rematch between Israel Adesanya [ ... ]
ufc
Charles Oliveira Could Fight Conor McGregor In Brazil After...
Brazilian superstar Charles Oliveira could take on Conor McGregor in his homeland after he pulled off [ ... ]
ufc
UFC 262 Preview: A New Heir To The Lightweight Throne Will Be...
It’s been more than three years since we have seen anyone other than Khabib Nurgmagomedov wear [ ... ]
ufc
UFC 261: Jorge Masvidal Suffers First Knock Out As Kamaru Usman...
If the build-up to UFC 261 was hyped up, the night itself exceeded all expectations. In a stunning main [ ... ]
ufc
Kamaru Usman Hints He Could Walk Away After UFC 261 Clash With...
UFC welterweight champion Kamaru Usman has suggested he could walk away from the Octagon after his main [ ... ]
ufc
UFC 261: All You Need To Know Ahead Of A Blockbuster Night In...
Fight fans are in for a real treat in the Octagon this weekend with UFC 261 serving up a blockbuster [ ... ]
ufc
Conor McGregor Cancels Dustin Poirier Trilogy Due To Dispute...
Conor McGregor has insisted his trilogy fight with Dustin Poirier is off after the pair were involved [ ... ]
ufc
New Lightweight Champion To Be Crowned At UFC 262 After Khabib...
It is looking increasingly likely that a new lightweight champion will be crowned at UFC 262 with Michael [ ... ]
ufc
UFC Set To Return In Front Of A Full Crowd With A Stacked Card...
After more than a year of coronavirus-induced capacity restrictions, the UFC is set to finally return [ ... ]
ufc
Four Champions And Three Undisputed Titles On The Line At UFC...
UFC 259 features four champions, as middleweight king Israel Adesanya moves up to 205lbs to battle the [ ... ]
ufc
Bold, Brash And Wealthy, Has Conor McGregor Simply Become Too...
Big and tough as he was, King Kong needed the Empire State Building; the big Silverback just wouldn’t [ ... ]
ufc
Everything We Know About Dana White And The UFC's Fight Island...
Ultimate Fighting Championship president Dana White has been vocal in his commitment to holding UFC [ ... ]
ufc
How Anime Fuelled Israel Adesanya's Ambition, Ability And Style...
Every so often, in every sport, a truly unique character arrives with seemingly the sole purpose of [ ... ]
ufc
Is Banking £1.5Million Per Second Enough To Keep Conor McGregor...
Find someone who looks at you the same way Dana White looks at Conor McGregor. Dana needs Conor. He [ ... ]
ufc
Donald 'Cowboy' Cerrone Is The Adrenaline Junkie Who Has Cheated...
Very, very few of us would dare take on Conor McGregor in a staring contest, let alone have the guts [ ... ]
ufc
''I Need MMA'' - Only The Octagon Can Bring Redemption For Conor...
Conor McGregor is back and, boy, is he glad. The Irishman returns to the cage this weekend to duke it [ ... ]
ufc
McGregor's Talk Of A Boxing Comeback Is Proof He's Running Out...
Conor McGregor is currently preparing for his comeback bout at UFC 246, which takes place at the T-Mobile [ ... ]
ufc
Conor Teams Up With His Boyhood Coach In Preparation For UFC...
Conor McGregor has turned back time as he looks to get the better of Donald Cerrone in UFC 246 on January [ ... ]
ufc
Masvidal Predicts Quick Win For Conor At UFC 246 To Set Up Blockbuster...
Jorge Masvidal, the number three ranked welterweight fighter in the UFC, has tipped Conor McGregor [ ... ]