2020 was a year most of humanity would like to forget. But while the rest of us were locked down in our homes, Kevin Holland was locked down in the Octagon, enjoying the best year of his MMA career. The middleweight racked up five wins last year, four of which came by stoppage. The man they call ‘Trail Blazer’ put himself firmly on the map and was richly rewarded for doing so. Holland scooped three Fighter Of The Year awards, including one from BT Sport, as well as four media Breakout/Breakthrough Fighter Of The Year gongs. With his mantlepiece swelling under the weight of these accolades, prognostications were bright for Holland in 2021.

This year, everybody’s pick for the breakout star of MMA in 2020 has fought twice, losing both. Kevin Holland has returned to Earth with a thud, picking up decision losses to Derek Brunson and Marvin Vettori. It should be said, both these opponents are top-five middleweights, with Vettori fresh off challenging for the UFC Middleweight Championship. Holland should be credited at least for taking a step up in class, and for taking the pair the full distance. However, this kind of drop-off remains alarming. It is this issue that the ‘Trail Blazer’ looks to address this Saturday at UFC Fight Night 193 in Las Vegas. 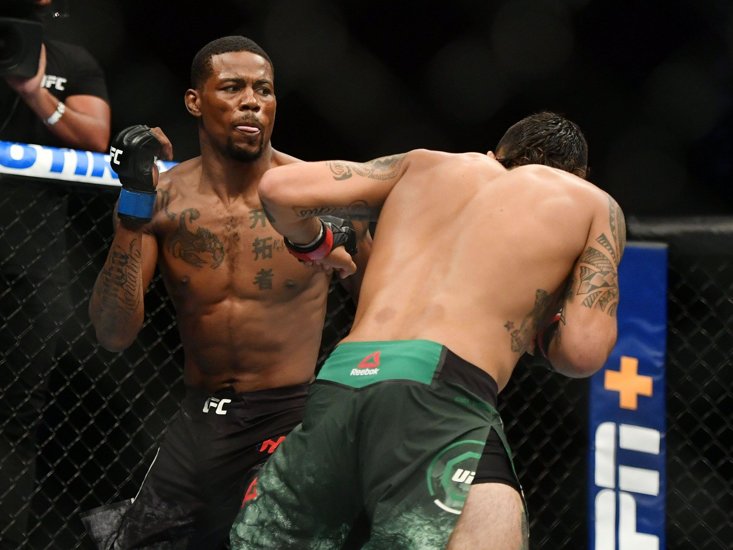 Unranked Kyle Daukaus appears to be a smart piece of matchmaking on-paper. A submission specialist before joining the UFC, his company record is 1-2 with every fight going to a decision. On the surface he feels like the perfect foil for a ranked fighter looking to rebuild. However, stylistically he could pose a real threat to Kevin Holland. The California-born fighter has struggled with his takedown defence, while Daukaus does his best work on the mat. This could prove to be a fatal combination for Holland’s hopes of challenging for titles in the future.

To his immense credit, Holland has tried to work on this area of his game. He has spent time training with former champions Daniel Cormier and Johnny Hendricks in a bid to tighten up his wrestling. In 2020, he rarely had to rely on the fundamentals of the sport, instead going on a truly remarkable run of highlight-reel finishes. There was the knockout scored from his back against Ronaldo Souza, the brutal slam-submission of Charlie Ontiveros, the one-punch stoppage of Joaquin Buckley and the barrage of knees and punches thrown at Anthony Hernandez. When Holland equalled the UFC record for most wins in a calendar year, he did it in spectacular fashion.

It is this box-office appeal that makes Holland’s fight this weekend so interesting. He has gone from taking the top ten by storm with some of the most spectacular finishes seen in years to fighting for his life as a top middleweight. As canny a piece of matchmaking as Daukaus is, providing an opportunity to address weaknesses against a less high-profile foe than Brunson and Vettori, it remains a huge risk. Lose here, and this will be Holland’s last co-main event for a long time. This is his chance to prove 2020 is not a distant memory, and that the fighter who spent that most tempestuous of years beguiling us with his talent still lives within him. It might not be spectacular, but the main thing here is to win.

x
Suggested Searches:
Manchester United
Liverpool
Manchester City
Marcus Rashford
Premier League
More
ufc
Three Main Events And A Soda: UFC To Finish 2021 With A Bang
It’s been quite the year for the Ultimate Fighting Championship. The return of fans in Jacksonville [ ... ]
ufc
Dern Return: The UFC Fight Night 194 Preview
The UFC Apex in Las Vegas, Nevada hosts a huge women’s strawweight clash on Saturday when Mackenzie [ ... ]
ufc
Where? When? How To Watch? Everything You Need To Know About...
The UFC returns to pay-per-view this weekend with a stacked card. There are two world title fights, [ ... ]
ufc
UFC 266: Why Joshua vs Usyk Isn’t The Only Fight Worth Watching...
The UFC returns to pay-per-view on Saturday night with a stacked card emanating from the T-Mobile Arena [ ... ]
ufc
UFC Fight Night 192: Light Heavyweights Lead The Way In Nevada
The UFC returns this Saturday with Fight Night 192, two weeks removed from Liverpool’s Darren [ ... ]
ufc
For Whom The Bell Tills: What Next For ‘The Gorilla’?
Darren Till’s third-round submission loss to Derek Brunson on Saturday night has left the Liverpool [ ... ]
ufc
Viva Scouse Vegas: Liverpool’s MMA Royalty Descends On Nevada
The UFC Apex in Enterprise, Nevada is bracing itself for a British invasion on Saturday night, as the [ ... ]
ufc
Chikadze vs Barboza: Georgia’s Skilled Striker Faces Tough Test...
Giga Chikadze might’ve began his UFC career with a loss, but since his shortcoming on Dana White’s [ ... ]
ufc
UFC Fight Night Sees The British Take Over Las Vegas Led By...
The stage has been set for the UFC to return to the UK since Jorge Masvidal’s famous knockout [ ... ]
ufc
Usman vs Covington II Heading To UFC 268 As Leon Edwards Misses...
A busy week for the UFC began with the announcement of a Welterweight title defense and a highly-anticipated [ ... ]
ufc
What Next For Conor McGregor After UFC 264 Loss To Dustin Poirier?
Conor McGregor’s future has been left up in the air after he suffered his second defeat in six [ ... ]
ufc
Your Guide To UFC 264 As Conor McGregor And Dustin Poirier Clash...
The much-anticipated trilogy between Conor McGregor and Dustin Poirier goes down on Saturday, July 11 [ ... ]
ufc
Who Is Conor’s McGregor's UFC 264 Opponent Dustin Poirier?
Dustin Poirier will take on Conor McGregor inside the Octagon for a third time at UFC 264 this [ ... ]
ufc
From Notorious Knockouts To Ruthless Rivalries, McGregor's Best...
Conor McGregor, the UFC’s divisive poster boy, returns to the cage on Sunday morning at UFC 264 [ ... ]
ufc
From Biggie To Joe Frazier, Rating Conor McGregor's Most Notorious...
Conor McGregor makes his return to Octagon on Saturday night when he takes on Dustin Poirier for a third [ ... ]
ufc
UFC 264: Everything You Need To Know Ahead Of Conor McGregor...
Conor McGregor and Dustin Poirier will be going at it for a third time this weekend, headlining a stacked [ ... ]
ufc
Your Guide To UFC 263, As Israel Adesanya Takes On Marvin Vettori
UFC 263 rolls into Arizona this weekend, with the small matter of a rematch between Israel Adesanya [ ... ]
ufc
Charles Oliveira Could Fight Conor McGregor In Brazil After...
Brazilian superstar Charles Oliveira could take on Conor McGregor in his homeland after he pulled off [ ... ]
ufc
UFC 262 Preview: A New Heir To The Lightweight Throne Will Be...
It’s been more than three years since we have seen anyone other than Khabib Nurgmagomedov wear [ ... ]
ufc
UFC 261: Jorge Masvidal Suffers First Knock Out As Kamaru Usman...
If the build-up to UFC 261 was hyped up, the night itself exceeded all expectations. In a stunning main [ ... ]
ufc
Kamaru Usman Hints He Could Walk Away After UFC 261 Clash With...
UFC welterweight champion Kamaru Usman has suggested he could walk away from the Octagon after his main [ ... ]
ufc
UFC 261: All You Need To Know Ahead Of A Blockbuster Night In...
Fight fans are in for a real treat in the Octagon this weekend with UFC 261 serving up a blockbuster [ ... ]
ufc
Conor McGregor Cancels Dustin Poirier Trilogy Due To Dispute...
Conor McGregor has insisted his trilogy fight with Dustin Poirier is off after the pair were involved [ ... ]
ufc
New Lightweight Champion To Be Crowned At UFC 262 After Khabib...
It is looking increasingly likely that a new lightweight champion will be crowned at UFC 262 with Michael [ ... ]
ufc
UFC Set To Return In Front Of A Full Crowd With A Stacked Card...
After more than a year of coronavirus-induced capacity restrictions, the UFC is set to finally return [ ... ]
ufc
Four Champions And Three Undisputed Titles On The Line At UFC...
UFC 259 features four champions, as middleweight king Israel Adesanya moves up to 205lbs to battle the [ ... ]
ufc
Bold, Brash And Wealthy, Has Conor McGregor Simply Become Too...
Big and tough as he was, King Kong needed the Empire State Building; the big Silverback just wouldn’t [ ... ]
ufc
Everything We Know About Dana White And The UFC's Fight Island...
Ultimate Fighting Championship president Dana White has been vocal in his commitment to holding UFC [ ... ]
ufc
How Anime Fuelled Israel Adesanya's Ambition, Ability And Style...
Every so often, in every sport, a truly unique character arrives with seemingly the sole purpose of [ ... ]
ufc
Is Banking £1.5Million Per Second Enough To Keep Conor McGregor...
Find someone who looks at you the same way Dana White looks at Conor McGregor. Dana needs Conor. He [ ... ]