UFC London is in the books, and it was a breakout night for a number of British fighters. Tom Aspinall fought in front of a UFC crowd for the first time, and the assembled O2 Arena throng witnessed him secure a career-best submission win over Alexander Volkov. Scouse duo Paddy ‘The Baddy’ Pimblett and ‘Meatball’ Molly McCann secured inside-the-distance finishes too, and the whole night felt like a real coming-out party for a new generation of British fighter.

So what comes next for this exciting, young British invasion? Here are the possible next steps for Saturday night’s victors.

The UFC has never had a British heavyweight champion, but the 02 saw a demonstration of why that might be about to change. The 28-year-old submitted Volkov in the first-round, taking a big step up in class in his stride. ‘Drago’ boasted wins over a who’s-who of heavyweight greats like Fabricio Werdum, Roy Nelson, Alistair Overeem and Stefan Struve. But Aspinall showed no fear as he submitted the Russian with a straight armbar.

The Manchester-born fighter offered his own assessment on who he should face next in the aftermath, calling out Australia’s Tai Tuivasa. The popular Aussie is coming off five knockout wins, and is ranked third by the UFC. A win for Aspinall would propel him to the cusp of a shot at Francis Ngannou’s UFC title.

There is also an intriguing option to be had once the dust settles on UFC 273 next month. Suriname’s ‘Bigi Boy’ Jairzinho Rozenstruik meets Marcin Tybura, and the winner presents a good opportunity for Aspinall. Both men are above him in the rankings, but are beatable. Tybura lost his last fight to Volkov, while Rozenstruik fell to Curtis Blaydes last time out. The in-form Aspinall would no doubt relish a meeting with either.

‘The Baddy’ continues to win hearts and minds, as much for his honesty and compassion outside the cage as his blistering form within it. Pimblett submitted Rodrigo Vargas for his fourth-consecutive first-round victory, and second UFC win. The company is clearly banking on the likeable 27-year-old as a future box office draw, which potentially limits his next move.

The UFC will be keen to keep Pimblett winning, which probably nixes a meeting with rival Ilia Topuria for now. That’s not to say the proud Scouser couldn’t beat the 12-0 phenom, but it is perhaps a little early in his UFC journey to risk it. Topuria climbed off the canvas to stop another Brit, Jai Herbert, on the London card.

Carlos Ferreira is perhaps a better proposition at this stage. The Brazilian is on a three-fight losing streak and in danger of dropping out of the lightweight rankings. Paddy could be just the man to drag him out of the list and take his place. 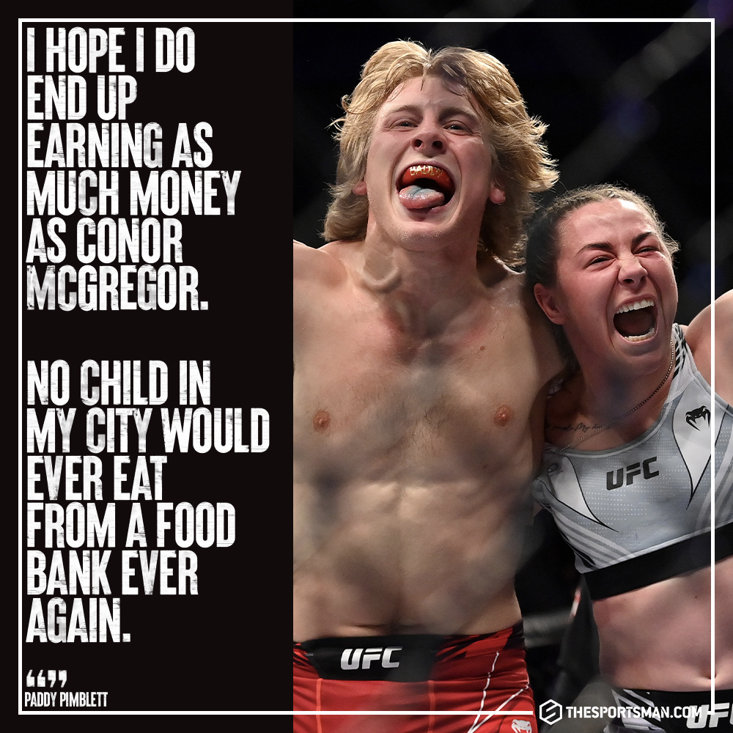 The spinning back-elbow ‘Meatball’ used to knock out Luana Carolina will live long in the memory. It was one of the most spectacular finishes we have seen this year, and a true star-making showing from McCann.

Riding the wave of two consecutive wins, ‘Meatball’ Molly has the opportunity to make waves in the flyweight division. Jinh Yu Frey could be the fighter she aims to do that against. The former Invicta FC Atomweight champion is also on a run of two wins, but has been out of the cage since last summer. Hannah Goldy is another name that could be in the hat. ‘24K’ won her last outing in September, snapping a two-fight losing run since she signed for the company.

Ipswich’s ‘Almighty’ looked positively vicious in taking apart veteran Dan Hooker in London. It was a puncher’s performance, with Allen whipping in brutal shots from minute one. The 28-year-old has lost just once in a 19-fight career, and has won all nine of his UFC outings.

Currently ranked seventh in the featherweight division, Allen will have one eye on ‘The Korean Zombie’ Chan Sung Jung’s title tilt against champion Alexander Volkanovski at UFC 273. A meeting with the loser of that fight would be an effective way of progressing to a title shot of his own. Alternatively, Josh Emmett sits directly above Allen in the rankings, and a victory over the 37-year-old would send Allen into the coveted top-five of the division.