Football
News
The AC Milan striker is not thought of as a legend of the game. But The Sportsman argues that he is one
Joey Mills
16:00, 23 Nov 2022

When you think of the legends who have turned out for France, your mind is likely awash with some of the game’s all-time greats. The cultured Michel Platini, the majestic Zinedine Zidane, the regal Thierry Henry. You might not immediately think of Olivier Giroud, the ex-Arsenal and Chelsea centre forward. But the 36-year-old, now of AC Milan, wrote his name into the history books on Tuesday night. Giroud’s brace in France’s 4-1 win over Australia saw him equal Henry’s record 51 goals for Les Bleus. The feat outlines Giroud’s credentials as perhaps France’s most low-key legend.

League titles in Serie A and Ligue 1. A Champions League, a Europa League, four FA Cups. A runner’s up medal at Euro 2016 and the pinnacle for any footballer, a World Cup winner’s medal in 2018. Giroud certainly boasts the trophy cabinet of a true footballing icon. Yet somehow the model-handsome forward from Chambery rarely gets mentioned in era-defining discussions. Even going into the 2022 World Cup that he has already illuminated, more column inches were dedicated to Karim Benzema missing the tournament through injury than the man who has replaced him in the starting XI.

France’s opening win and Giroud’s part in it has provided a much-needed opportunity for the player to get some recognition. A vital cog in the machine four years ago when France lifted this trophy, much was made of the fact he did not score in Russia. But Giroud was a crucial part of the success, starting every game bar their opener, where he came on as a substitute. The emotional celebrations of his teammates as he matched Henry’s record on Tuesday underlined just how much they value his unselfish contributions.

This is the crux of why Giroud’s work is not as romanticised as some of his peers. He is capable of the spectacular, like the scorpion kick he scored for Arsenal that won him the Puskas Award. But his stock-in-trade is old-fashioned centre forward play. Giroud holds the ball up, he brings teammates into play and he scores with frequency. In an era of universality in forward play, Giroud is an out-and-out number nine. It’s time he was recognised as one of the greats in that role. 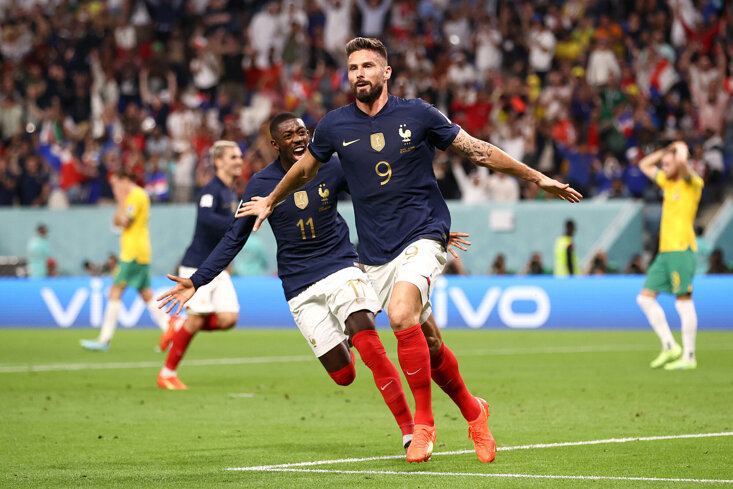 He has 258 club goals to go with his 51 for the national side. Goals in FA Cup and Europa League finals. A brace in a Euros semi-final. Giroud is a reliable goalscorer, even on the biggest stages the game has to offer. With two goals in his first game of the 2022 World Cup, and Mbappe at his creative best on the wing, there is even a chance at the Golden Boot on offer.

If France go deep in Qatar, it stands to reason Giroud will increase his tally. If he does, he will stand alone as France’s record scorer. Even if France reach the final with Giroud playing every game, he will also have surpassed the record in less than Henry’s 123 games.

But Giroud shouldn’t need Golden Boots and further records to justify his standing in the game. He is a player who has done it consistently at some of the world’s biggest clubs. He has won almost everything there is to win in the sport, not as a fringe player but as an important part of multiple teams. At an age where many players are seeing out their dotage in Major League Soccer or another high-paying outpost, Giroud is a title-winner with AC Milan and leading the French line at a World Cup.

They don’t build statues of players like Giroud. Not for him the pomp and ceremony afforded to other recent greats like Lionel Messi, Cristiano Ronaldo and even his fellow record-holder Henry. But maybe they should chisel the striker’s perfectly-angled jawline out of stone after this tournament. If all goes to plan, the statue could be holding a World Cup in each hand.