Before Anthony Joshua’s shock Madison Square Garden defeat to Andy Ruiz Jr in June 2019, there was an aura of invincibility surrounding the Watford man. Of course, he avenged that loss just six months later, and has since returned to his destructive best with a ninth-round stoppage of Kubrat Pulev. However, that unbeatable feel that followed ‘AJ’ throughout his early career is no more, and it is safe to say that his vulnerabilities have been displayed to the watching world on more than one occasion.

Why then, ahead of his September showdown with the undefeated Oleksandr Usyk, is the Brit as short as 2/5 with Betfred to have his arm raised at the end of their bout?

This is the same Usyk who took just 15 fights to collect every belt in the cruiserweight division, before handing Tony Bellew the most crushing knockout of his proud career. Sure, there is the size factor. Joshua is a natural heavyweight, while his Ukrainian opponent has had to work extremely hard to bulk up in order to compete in the top division. Having said that, a quick glimpse at his recent social media footage should put to bed any concerns that Usyk is too small to topple the 6”6 Joshua.

Since stepping up to heavyweight, Usyk has weighed in at 215lbs before stopping Chazz Witherspoon and then at a shade over 217lbs when beating Derek Chisora over 12 rounds. ‘Del Boy’ did enjoy brief moments in that clash last October, although it is a stretch of the truth to suggest that Usyk was fortunate to be handed the decision, as some biased UK media outlets had suggested. In reality, the 34-year-old was in control throughout and appears to have learned his lesson in allowing too much in the way of bulk to his naturally bigger opponents. A recent social post showed Usyk weighing a formidable 230lbs and he now looks like a natural heavyweight himself.

AJ fans will hope that isn’t the case because size is the main attribute that makes their man a firm favourite in the September 25th bout at the Tottenham Hotspur Stadium. If Usyk is the real deal at heavyweight, we could be weeks away from witnessing another ‘upset’ involving the brilliantly marketable Joshua. Let’s not forget, Usyk is ranked at number four in the Ring Magazine pound-for-pound ratings – a list that AJ has never threatened to gate-crash.

Usyk’s perfect record of 18-0 is impressive enough but is made all the more remarkable given that he has yet to come close to tasting defeat. His most impressive wins to date have come against fellow undefeated contenders. In first winning a world title at cruiserweight, he romped to a unanimous decision against Krzysztof Glowacki in his native Poland. The likes of Marco Huck and Michael Hunter were dealt with before unifying against the 23-0 Mairis Briedis in his home country of Latvia. He then claimed all the marbles while barely losing a minute of any round against the widely fancied Murat Gassiev in – you guessed it – the Russian’s backyard. Since then, he has beaten Bellew in Manchester, Witherspoon in Chicago, and Chisora at Wembley.

This is a formidable fighter who has no issue with upsetting the home crowd on his way to glory. Will Joshua be next? If fight fans are finally going to see the undisputed clash between AJ and Tyson Fury, let’s hope not. However, anyone thinking that this is another routine defence for the 24-1 superstar is in for a rude awakening. 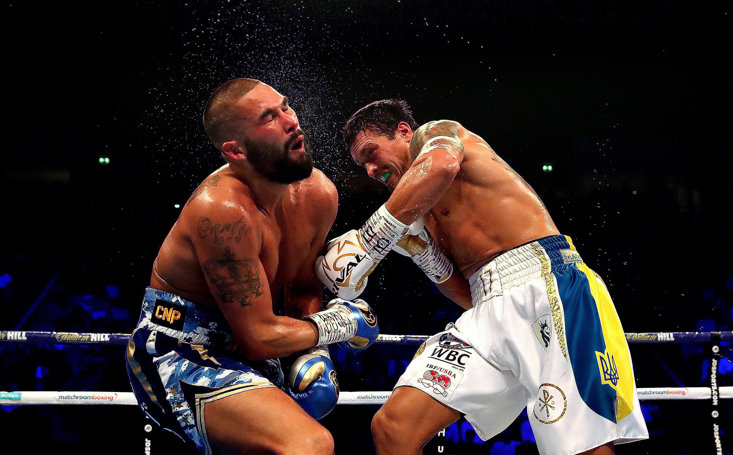 Usyk is back training alongside Anatoly Lomachenko – father of fellow Ukrainian sensation Vasyl. Since ‘Loma’ turned pro, his father has trained his son exclusively but has made occasional exceptions for Usyk’s biggest bouts. His career-best performance against Gassiev came off the back of a full camp with the 56-year-old trainer, and if Usyk puts on a display like he did to be crowned WBSS king three years ago, this could be Joshua’s toughest night yet. Of course, you’d have to say that Joshua represents Usyk’s most difficult challenge to date also, but the 2/1 available on the visiting fighter upsetting the home crowd once again may need to be considered.

“If anything, it’s just got even harder because Usyk has now gone back with Lomachenko’s father. They will create a game plan that is going to try and negate everything good that Anthony Joshua does.

“That’s what Usyk does so well. He takes away your strengths before he looks at implementing his own strengths.”

Before claiming that he hopes and believes that Joshua’s size will catch up with his opponent in the later rounds, Bellew finished with a warning…

There’s no easy way to beat this guy.

For anyone thinking that this will be a straightforward Joshua victory ahead of that potential super fight with Fury, you might want to keep those eight words in mind.

x
Suggested Searches:
Manchester United
Liverpool
Manchester City
Marcus Rashford
Premier League
More
boxing
On This Day: Golden George Puts The Boxing World On Notice At...
George Foreman is one of those sportspeople that means something to everyone. You might know him best [ ... ]
boxing
From Mike Tyson To Muhammad Ali, The Top Ten Heavyweight Boxers...
Dillian Whyte has hit out at claims that world heavyweight champion Tyson Fury is one of the greatest [ ... ]
boxing
Boxing Doesn’t Need A New Mayweather, It Needs Shakur Stevenson
Shakur Stevenson became a two-weight world champion on Saturday night when he dominated and then stopped [ ... ]
boxing
On This Day In 1990: Holyfield Muzzles Boxing’s Greatest Underdog
When you’re on top of the world, the only way to go is down. Boxing’s ultimate underdog, [ ... ]
boxing
Everything You Need To Know Ahead Of Jamel Herring vs Shakur...
This weekend sees undefeated Olympic silver medalist Shakur Stevenson take on former US Marine Jamel [ ... ]
boxing
Anthony Ogogo Has Gone From The Olympics To Pro Wrestling Stardom
All Elite Wrestling star Anthony Ogogo has not done anything the usual way. Most professional wrestlers [ ... ]
boxing
AJ On The Hunt For A New Trainer, Five Boxing Stories You Might...
All of the talk in the boxing world might be focused on the collapse of Dillian Whyte’s heavyweight [ ... ]
boxing
Catterall Confident Ahead Of Taylor And Backs Chantelle Cameron...
Jack Catterall has warned that Josh Taylor can’t expect to just turn up and expect to win when [ ... ]
boxing
Weekend's Boxing Provides A Fight Of The Year And Upset Of The...
An Upset of the Year contender, a Fight of the Year contender and a big night in Newcastle for British [ ... ]
boxing
On This Day In 1987: Tyson Brings The 15-Round Era To A Brutal...
On this day in 1987, boxing changed forever, as the last ever 15-round world heavyweight title fight [ ... ]
boxing
Brawl On The Tyne: Fury, Marshall And Chris Eubank Jr Descend...
Unbeaten Savannah Marshall makes the second defence of her WBO middleweight championship this Saturday [ ... ]
boxing
Mixed Week For The Eubanks: Five Boxing Stories You Might Have...
Boxing never sleeps, and with Fury-Wilder III in the rearview, attention has turned to exciting fights [ ... ]
boxing
Haye At 41: The World Title Wins That Defined ‘The Hayemaker’
Former two-weight world champion David Haye turns 41 today. ‘The Hayemaker’ is unfairly [ ... ]
boxing
''You Big, Stiff Idiot!'': The Wit And Wisdom Of Tyson Fury
Not content with being the most able heavyweight fighter on the planet, Tyson Fury is also a supreme [ ... ]
boxing
The King’s Gambit: Who Should Tyson Fury Fight Next?
‘The Gypsy King’ has the world at his feet after solidifying his claim to the throne with [ ... ]
boxing
Retirement Or Fight His Way Back: What Happens Now To Deontay...
Deontay Wilder’s stock amongst the boxing community managed to both rise and fall on a damaging [ ... ]
boxing
Tyson Fury Retains Heavyweight Titles In Incredible Trilogy...
The first fight was a resurrection. The second was a demolition. Tonight, Tyson Fury’s 11th-round [ ... ]
boxing
LIVE Tyson Fury v Deontay Wilder 3
Morning all! What are you doing up at this time? It's Tyson Fury v Deontay Wilder. Again! The WBC [ ... ]
boxing
Merseyside Derby: Experienced Smith Awaits For Hungry Fowler
Liam Smith takes on Anthony Fowler this Saturday in a battle for Liverpool supremacy. The former world [ ... ]
boxing
Whyte Lined Up For Fury/Wilder Winner, Five Boxing Stories You...
Ahead of a blockbuster weekend in boxing in the ring, it’s been a pretty busy week out of it. [ ... ]
boxing
The Man Who Beat The Man: Tyson Fury On The Lineal Championship
When Tyson Fury walks to the ring to face Deontay Wilder on Saturday night, he will have two belts in [ ... ]
boxing
Fury vs Wilder III Undercard Preview: Heavyweight Heaven In...
It’s heavyweight heaven this weekend in Las Vegas as not only will fight fans be treated to Tyson [ ... ]
boxing
“I Look At Deontay Wilder Like He’s Stupid” - The Tyson Fury...
“Boxing is not rocket science. It’s me going in there, punching a man's face in. That's [ ... ]
boxing
Happy Birthday, Micky Ward: Remembering The Gatti War That Launched...
The word warrior is thrown around so readily in boxing, it has lost some of its impact. While every [ ... ]
boxing
Liam Smith vs Anthony Fowler: Everything You Need To Know
There’s a monster match-up on Merseyside this weekend when Liam Smith and Anthony Fowler go head-to-head [ ... ]
boxing
On This Day In 1998: Floyd Mayweather Wins First Ever World...
“We believe in our heart of hearts that Floyd Mayweather is the successor in a line that starts [ ... ]
boxing
Undercard? When? How To Watch? Everything You Need To Know About...
Tyson Fury and Deontay Wilder go head-to head for a third time next weekend, with The Gypsy King’s [ ... ]
boxing
UK First Choice For AJ Vs Usyk Rematch, Five Boxing Stories...
There’s news on where Anthony Joshua’s rematch with Oleksandr Usyk could land, a modern [ ... ]
boxing
Rebuild And Reclaim: Why Anthony Joshua Needs A New Trainer
Anthony Joshua looked bereft of ideas as Oleksandr Usyk boxed, moved and pounded his way to a unanimous [ ... ]
boxing
My Name Is Prince: 26 Years Since Naseem Hamed Won His First...
26 years ago today, a Prince was crowned king. ‘Prince’ Naseem Hamed stopped Wales’ [ ... ]