Novak Djokovic will continue his bid to become the first male player in history to win the ‘Golden Slam’ of tennis when he steps out at Wimbledon at the end of the month. The ‘Golden Slam’ refers to a player winning all four major titles as well as the Olympics in the same year and of course, the Olympics only come around every four years, making the feat so much more special.

In 1988, Steffi Graf became the first player ever to achieve it, but the nobody in the men’s game has managed it to date. Djokovic already has the Australian and French Open to his name this year, and is the odds-on favourite to add the Wimbledon title to his belt later this summer. If he won his sixth Wimbledon crown, he would find himself level with Roger Federer and Rafael Nadal on 20 career Grand Slam victories so the time has most certainly come to start talking about Djokovic as the greatest tennis player ever.

A win at SW19 would be his third consecutive success at the tournament, a feat that only Roger Federer has managed since the turn of the millennium. Federer will be there bidding to retain a title that he last won in 2017, but in losing to Felix Auger-Aliassime last time out, his preparation has hardly been ideal.

Meanwhile, Rafael Nadal, who Djokovic conquered in spectacular style at Roland Garros, has pulled out of both Wimbledon and the Tokyo Olympics, saying that he needs to “listen to his body” after a gruelling clay season. With Andy Murray no longer the threat he used to be at Wimbledon, who is left to try and halt the Serbian in his quest to land that elusive ‘Golden Slam’?

Let’s take a look at some of the contenders.

The most obvious challenge comes from the in-form Stefanos Tsitsipas. The Greek talent found himself two sets up against Djokovic in last week’s French Open final, only for the Serbian to dig deep and miraculously recover to win his second Paris championship.

Including his run in France, the 22-year-old has now reached the final in four of his last six tournaments, winning in Lyon and Monte Carlo.

His two defeats have come to Djokovic and Nadal, and as we all know, there’s no shame in that.

He has never gone beyond the fourth round at Wimbledon, but in this current form, expect Tsitsipas to go close this year. 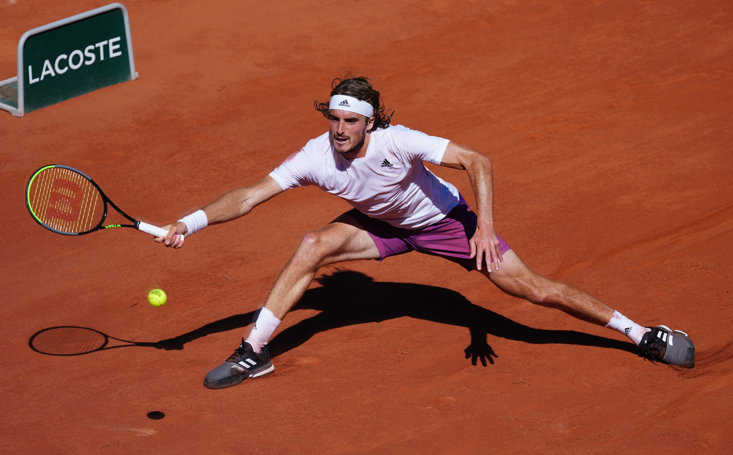 Daniil Medvedev is Betfred’s second favourite to win at Wimbledon, making him possibly the most likely to put an end to Djokovic’s run.

However, his preparation has been far from ideal. The world number two was dumped out of the Halle Open first round in straight sets to world number 45 Jan-Lennard Struff. He hasn’t gone beyond the quarter-finals in any of his last five tournaments, and having not gone beyond the third round at Wimbledon, this might be a big ask.

As long as Federer is turning up at Wimbledon, it just doesn’t feel right to discount him.

Sure, there is that defeat to Auger-Aliassime, and he is approaching his 40th birthday, but the Swiss is adamant that he can still mix it with the best. If he were to clinch his ninth Wimbledon trophy, it would be his greatest achievement in the sport yet. 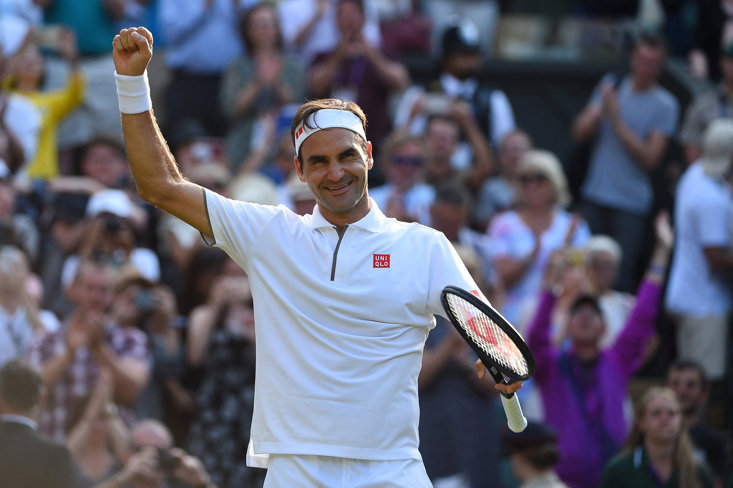 Alexander Zverev has yet to win a Grand Slam, but he has come close a few times. With Nadal out, and some of the usual contenders past their prime, could this be the year that he finally breaks his duck?

He pushed Tsitsipas all the way in a thrilling five set semi-final clash as the French Open, and did in fact beat the Greek in the final at Acapulco back in March. The German also made it through to the final of the ATP Masters in Madrid without dropping a single set, before coming from behind to beat Matteo Berrettini to lift the title.

Zverev is a bit of a wildcard at times, but if he turns it on, can be a serious contender.

Meanwhile, in the women’s draw, four-time Grand Slam champion Naomi Osaka will not be present at the All England Club after taking time out from the sport after experiencing depression and anxiety.

The world number two says she is “excited to play in front of her home fans” in the Tokyo Olympics, but is spending some time this summer with her family and friends. Our recent article discusses how tennis could have done more to protect Osaka in her time of need.

In Osaka’s absence, Ashleigh Barty is the favourite to go all the way at Wimbledon, with Serena Williams not far behind her in the betting as she bids to finally equal Margaret Court’s record of 24 Grand Slams.

x
Suggested Searches:
Manchester United
Liverpool
Manchester City
Marcus Rashford
Premier League
More
tennis
20 Times A Champion - But Why Is Novak Djokovic Not Loved Like...
Novak Djokovic’s 20th Grand Slam title at Wimbledon on Sunday saw him go level with tennis’ [ ... ]
tennis
Djokovic Makes History With 20th Grand Slam Men's Singles Title...
Novak Djokovic has won his 20th Grand Slam singles title – equalling the men’s record held [ ... ]
tennis
Ashleigh Barty Emulates Evonne Goolagong 50 Years On With First...
World number one Ashleigh Barty has emulated Australian legend Evonne Goolagong and won Wimbledon for [ ... ]
tennis
Italy Eye Up Super Sunday As Berrettini Faces Djokovic In Wimbledon...
It could be a very special Sunday for Italy as their men face England in the Euro 2020 final and now [ ... ]
tennis
Wimbledon Men's Semi-Finals: Can Anyone Stop Novak Djokovic...
The men’s Wimbledon semi-finalists were confirmed on Wednesday after some intense quarter-final [ ... ]
tennis
Ashleigh Barty To Take On Karolina Pliskova In Women's Wimbledon...
World number one Ashleigh Barty will play Czech eighth seed Karolina Pliskova in Saturday's Wimbledon [ ... ]
tennis
Wimbledon Great Roger Federer Hints At Retirement, But What...
Wednesday may have marked the end of an era. The great Roger Federer hinted that his quarter-final defeat [ ... ]
tennis
Wimbledon Women's Semi-Finals: Barty The One To Beat As Sabalenka...
The women’s Wimbledon semi-finalists were confirmed on Tuesday after a brutal round of quarter-final [ ... ]
tennis
Canadians Auger-Aliassime And Shapovalov Out To Make History...
Wimbledon is loved for its rich history and we get to witness another piece of it as the quarter-finals [ ... ]
tennis
The Pressure Is On World Number One Ashleigh Barty Ahead Of...
The women’s world number one Ashleigh Barty has so far justified her ranking at Wimbledon as she [ ... ]
tennis
Coco Gauff Won’t Be Fazed When She Takes On Former Wimbledon...
As we enter the second week of Wimbledon and into the round of 16, a lot of eyes will be on young Coco [ ... ]
tennis
He's Not The Same Andy Murray, But There Might Be Plenty More...
It was a bittersweet Wimbledon return for Andy Murray after four years away from the men's singles as [ ... ]
tennis
'Unbreakable' Emma Raducanu Could Be The Future Of British Tennis
On the week of 13 October 2002, Westlife’s ‘Unbreakable’ hit the top of the UK singles [ ... ]
tennis
As Serena Exits Wimbledon, Have Her Hopes Of A 24th Grand Slam...
It wasn’t supposed to end this way. When Serena Williams beat her sister Venus in straight sets [ ... ]
tennis
Andy Murray Laughs Off Retirement Talk After Comeback Wimbledon...
Andy Murray was a slight betting underdog when he took to centre court for the first time in four years [ ... ]
tennis
World Number One Djokovic Is The Perfect Lesson For Promising...
Young Briton Jack Draper faces world number one Novak Djokovic on Centre Court at Wimbledon on Day One [ ... ]
tennis
16 Years After His Wimbledon Debut, This Summer Could Be Andy...
It’s summer 2005. The sun is shining, Wimbledon’s grass courts are greener than ever, the [ ... ]
tennis
Wimbledon Is Back - But How Will It Look This Year?
Wimbledon is back this summer after a forced absence last year, although things are set to look a little [ ... ]
tennis
The Tennis Stars To Look Out For At SW19 As Wimbledon Qualifying...
As the Wimbledon qualifiers get underway today there will be some unfamiliar faces who will be looking [ ... ]
tennis
The British Tennis Superstars Ready To Light Up The Court At...
We are deep into June and that can only mean one thing, Wimbledon is just around the corner and the [ ... ]
tennis
Ignore The Andy Murray Comparisons, Jack Draper Is Forging His...
Jack Draper is going to face an awful lot of premature Andy Murray comparisons. He’s British, [ ... ]
tennis
Why Novak Djokovic Is Already The Greatest Male Tennis Player...
It’s time to start talking about Novak Djokovic as the greatest male tennis player of all time. [ ... ]
tennis
Djokovic Sends Nadal To Third Loss In 108 French Open Matches...
Rafael Nadal succumbed to only his third-ever defeat at the French Open on Friday evening at the hands [ ... ]
tennis
Who Are The Female Semi-Finalists In The Women's French Open?
A Russian, a Slovakian, a Czech and a Greek walk into the French Open semi-finals. We are now down to [ ... ]
tennis
Alfie Hewett And Gordon Reid Are Britain's Dominant Duo To Be...
Ant and Dec, Morecambe and Wise, Torvill and Dean. Now Britain has another remarkable pairing to [ ... ]
tennis
Is Serena Williams Finally About To Equal Grand Slam Record...
It has been more than four years since Serena Williams won the last of her 23 Grand Slam titles back [ ... ]
tennis
Coco Gauff's Maturity Is Admirable As She Targets French Open...
At the age of 15 years and 3 months old, Coco Gauff burst onto the scene in 2019 as the youngest player [ ... ]
tennis
Lessons Must Be Learned Across The Whole Of Sport Over Naomi...
Following Naomi Osaka’s decision to withdraw after the first round of the French Open, the authorities [ ... ]
tennis
A Compromise Must Be Found As Naomi Osaka Fined $15,000 For...
Following her excellent first round display at Roland Garros, Naomi Osaka is being threatened with expulsion [ ... ]
tennis
Osaka Lets Her Tennis Do The Talking To Cruise Into French Open...
Naomi Osaka let her tennis do the talking by defeating Patricia Maria Tig in straight sets to progress [ ... ]