The final 32-team World Cup group stage has come to a thrilling close and with the knockout stage starting tomorrow, we have a whole load more football to enjoy. Here’s the latest news from Qatar, on a day when South Korea pulled off another shock result.

Uruguay may have beaten Ghana 2-0 after Andrew Ayew missed a crucial penalty, but it was Luis Suarez and co that were left in tears. South Korea’s magnificent late winner against group winners Portugal meant that both teams crashed out of the tournament, and it was all too much for some to take.

Darwin Nunez and Suarez, who had both already been substituted, were left sobbing on the Uruguayan bench, before they surrounded the referee to complain about a late penalty shout. But it was all too late and Uruguay head home at the group stages for the first time since 2002.

Vincent Aboubakar bagged the biggest goal of his career as we enjoyed another World Cup shock on Friday night. He headed home the winner for Cameroon as they beat Brazil 1-0 and the tournament favourites were left to deal with a defeat that didn’t affect them too much, as they remained top of the group.

All the talk pre-game was around 39-year-old Dani Alves, who became the oldest ever Brazilian player at a World Cup when he captained his country. There was some uproar when he was announced in the squad, but he proved that he can still perform on the biggest stage. There’s not been many right-back better than him in history, and this was another major milestone.

They may have kicked off at the same time, but South Korea vs Portugal finished about eight minutes before Uruguay vs Ghana. Having secured a famous 2-1 win, the South Korean stars were then left waiting, gathered in a circle around mobile phones to watch the last few minutes unfold. It was end to end stuff as both teams chased goals, but eventually the whistle blew, and the incredible South Korean celebrations followed. 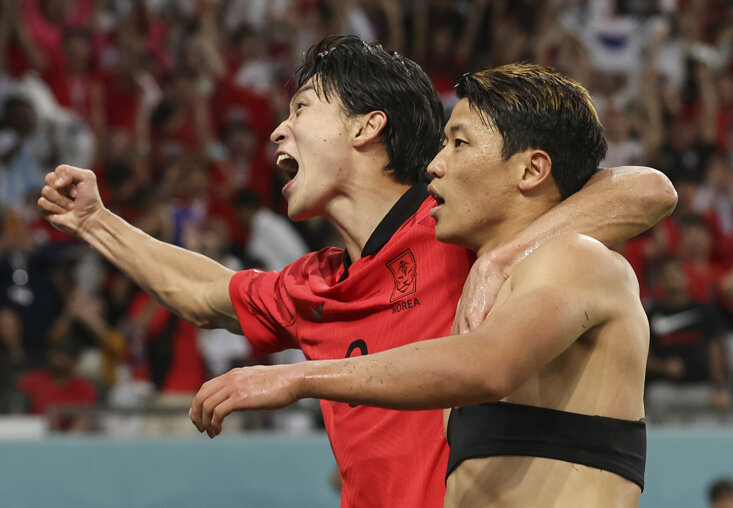 Serbia and Switzerland play out thriller

We’ve seen some cracking ties over the last week, but Serbia and Switzerland came out swinging. Drawing 2-2 at half time, it became the first World Cup match since England vs Argentina in 1998 where both teams had found the net twice in the first half, and Remo Frueler’s goal was enough to secure a 3-2 win for the Swiss.

It puts them into the last 16 where they will face Portugal, and we now know our full line-up for the knockout stages…

The last sixteen begins tomorrow, and here are all the fixtures we have to look forward to:

The Netherlands vs USA

BBC presenter Gary Lineker caused a stir earlier today when he stated he believed England should rest right-back Kyle Walker against Senegal in the last 16, in order to protect him from injury. Should England get through, they will likely face France and Kylian Mbappe, so you can see his thinking, but given the Manchester City man has played just an hour of football in the last month, and the AFCON champions could knock the Three Lions out, it did come across as slightly arrogant.

Aliou Cisse might just be pinning this one up on the dressing room wall as another example of ‘English arrogance.’