It wasn’t supposed to end this way.

When Serena Williams beat her sister Venus in straight sets in the final of the 2017 French Open, it seemed a matter of when and not if she would manage another major triumph to equal Margaret Court’s 24 Grand Slam titles.

Now, four-and-a-half years down the line, it looks as though her quest to add to her 23 Grand Slams has ended in the cruellest fashion. Wimbledon already looks a lot different in 2021, but Serena not making it beyond the opening round for the first time in her career is perhaps the biggest shock of the lot.

In a sisterly rivalry that has spanned over two decades, Serena and Venus have shared a court in the final of a Grand Slam on nine occasions. In all likelihood, we won’t see a tenth.

The younger of the two sisters didn’t have to wait too long for an opportunity to equal Court’s record that has now stood for 48 years, as the American dropped just one set en route to her tenth Wimbledon final in 2018, only to lose in straight sets to the impressive Angelique Kerber.

Naomi Osaka got the better of her at the US Open a few months later, before Simona Halep inflicted a second straight Wimbledon final defeat in 2019. Williams’ most recent attempt at equalling that elusive 24th Grand Slam came in the 2019 US Open, when Bianca Andreescu beat her 6-3, 7-5 in the final after once again dropping just the one set before then.

Before defeats in the 2016 Australian and French Open finals, Williams’ record when playing in finals was an incredible 21 victories and just four defeats. From 2016 onwards, that record now stands at two victories and six losses.

Has she remained competitive? Absolutely. You don’t reach eight Grand Slam finals in four years if you aren’t one of the best players on tour. However, the fear factor that opponents had once suffered with when facing a menacing Serena on the biggest stage was no more.

Williams celebrates her 40th birthday in less than three months, and it is testament to her incredible athleticism and dedication that she continues to test herself against the very best. Until now, perhaps. 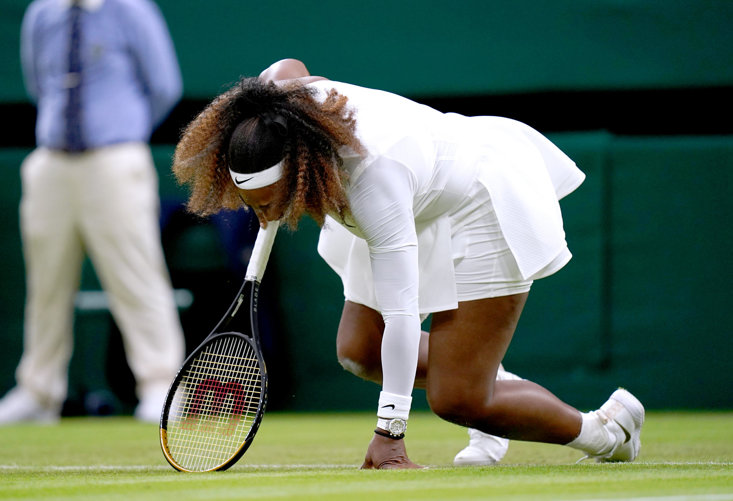 A break up and leading 3-1 against Aliaksandra Sasnovich on her beloved centre court, Williams seemed to roll her left ankle and was forced to leave the court for a medical time-out after the world number 100 had immediately broke back.

Williams, with her right thigh already heavily strapped up, returned to an adoring court but the tears were already flowing before she accepted her retirement from this year’s tournament.

At 3-3, the Michigan native stumbled as she tried to change direction and immediately dropped to the floor to gasps from the concerned crowd. Her tournament was over, and with it, perhaps her stellar career too.

It would be a crying shame for a legend of the sport to be forced to bow out like this, particularly with her coach, Patrick Mouratoglou, being so bullish in the build up to the All England Club spectacle.

“There are two challenges,” the influential coach claimed. “Be ready for the Grand Slams and be able to find the real Serena when she needs to.

“If she finds those two she will win a Grand Slam. She can, of course she can, 100 percent.”

Following this latest injury nightmare, that percentage may have now dipped significantly and it is now looking increasingly unlikely that Serena will add to her 23 Grand Slam titles.

For the good of tennis, let’s hope we’re wrong.

x
Suggested Searches:
Manchester United
Liverpool
Manchester City
Marcus Rashford
Premier League
More
tennis
20 Times A Champion - But Why Is Novak Djokovic Not Loved Like...
Novak Djokovic’s 20th Grand Slam title at Wimbledon on Sunday saw him go level with tennis’ [ ... ]
tennis
Djokovic Makes History With 20th Grand Slam Men's Singles Title...
Novak Djokovic has won his 20th Grand Slam singles title – equalling the men’s record held [ ... ]
tennis
Ashleigh Barty Emulates Evonne Goolagong 50 Years On With First...
World number one Ashleigh Barty has emulated Australian legend Evonne Goolagong and won Wimbledon for [ ... ]
tennis
Italy Eye Up Super Sunday As Berrettini Faces Djokovic In Wimbledon...
It could be a very special Sunday for Italy as their men face England in the Euro 2020 final and now [ ... ]
tennis
Wimbledon Men's Semi-Finals: Can Anyone Stop Novak Djokovic...
The men’s Wimbledon semi-finalists were confirmed on Wednesday after some intense quarter-final [ ... ]
tennis
Ashleigh Barty To Take On Karolina Pliskova In Women's Wimbledon...
World number one Ashleigh Barty will play Czech eighth seed Karolina Pliskova in Saturday's Wimbledon [ ... ]
tennis
Wimbledon Great Roger Federer Hints At Retirement, But What...
Wednesday may have marked the end of an era. The great Roger Federer hinted that his quarter-final defeat [ ... ]
tennis
Wimbledon Women's Semi-Finals: Barty The One To Beat As Sabalenka...
The women’s Wimbledon semi-finalists were confirmed on Tuesday after a brutal round of quarter-final [ ... ]
tennis
Canadians Auger-Aliassime And Shapovalov Out To Make History...
Wimbledon is loved for its rich history and we get to witness another piece of it as the quarter-finals [ ... ]
tennis
The Pressure Is On World Number One Ashleigh Barty Ahead Of...
The women’s world number one Ashleigh Barty has so far justified her ranking at Wimbledon as she [ ... ]
tennis
Coco Gauff Won’t Be Fazed When She Takes On Former Wimbledon...
As we enter the second week of Wimbledon and into the round of 16, a lot of eyes will be on young Coco [ ... ]
tennis
He's Not The Same Andy Murray, But There Might Be Plenty More...
It was a bittersweet Wimbledon return for Andy Murray after four years away from the men's singles as [ ... ]
tennis
'Unbreakable' Emma Raducanu Could Be The Future Of British Tennis
On the week of 13 October 2002, Westlife’s ‘Unbreakable’ hit the top of the UK singles [ ... ]
tennis
Andy Murray Laughs Off Retirement Talk After Comeback Wimbledon...
Andy Murray was a slight betting underdog when he took to centre court for the first time in four years [ ... ]
tennis
World Number One Djokovic Is The Perfect Lesson For Promising...
Young Briton Jack Draper faces world number one Novak Djokovic on Centre Court at Wimbledon on Day One [ ... ]
tennis
16 Years After His Wimbledon Debut, This Summer Could Be Andy...
It’s summer 2005. The sun is shining, Wimbledon’s grass courts are greener than ever, the [ ... ]
tennis
Wimbledon Is Back - But How Will It Look This Year?
Wimbledon is back this summer after a forced absence last year, although things are set to look a little [ ... ]
tennis
The Tennis Stars To Look Out For At SW19 As Wimbledon Qualifying...
As the Wimbledon qualifiers get underway today there will be some unfamiliar faces who will be looking [ ... ]
tennis
The British Tennis Superstars Ready To Light Up The Court At...
We are deep into June and that can only mean one thing, Wimbledon is just around the corner and the [ ... ]
tennis
With Nadal Out And Federer Struggling, Who Can Stop Novak Djokovic...
Novak Djokovic will continue his bid to become the first male player in history to win the ‘Golden [ ... ]
tennis
Ignore The Andy Murray Comparisons, Jack Draper Is Forging His...
Jack Draper is going to face an awful lot of premature Andy Murray comparisons. He’s British, [ ... ]
tennis
Why Novak Djokovic Is Already The Greatest Male Tennis Player...
It’s time to start talking about Novak Djokovic as the greatest male tennis player of all time. [ ... ]
tennis
Djokovic Sends Nadal To Third Loss In 108 French Open Matches...
Rafael Nadal succumbed to only his third-ever defeat at the French Open on Friday evening at the hands [ ... ]
tennis
Who Are The Female Semi-Finalists In The Women's French Open?
A Russian, a Slovakian, a Czech and a Greek walk into the French Open semi-finals. We are now down to [ ... ]
tennis
Alfie Hewett And Gordon Reid Are Britain's Dominant Duo To Be...
Ant and Dec, Morecambe and Wise, Torvill and Dean. Now Britain has another remarkable pairing to [ ... ]
tennis
Is Serena Williams Finally About To Equal Grand Slam Record...
It has been more than four years since Serena Williams won the last of her 23 Grand Slam titles back [ ... ]
tennis
Coco Gauff's Maturity Is Admirable As She Targets French Open...
At the age of 15 years and 3 months old, Coco Gauff burst onto the scene in 2019 as the youngest player [ ... ]
tennis
Lessons Must Be Learned Across The Whole Of Sport Over Naomi...
Following Naomi Osaka’s decision to withdraw after the first round of the French Open, the authorities [ ... ]
tennis
A Compromise Must Be Found As Naomi Osaka Fined $15,000 For...
Following her excellent first round display at Roland Garros, Naomi Osaka is being threatened with expulsion [ ... ]
tennis
Osaka Lets Her Tennis Do The Talking To Cruise Into French Open...
Naomi Osaka let her tennis do the talking by defeating Patricia Maria Tig in straight sets to progress [ ... ]