That date of April 3 for the Premier League to resume is looking increasingly optimistic day to day.

Callum Hudson-Odoi becoming the first Premier League player to announce he had contracted the coronavirus virus, as well as Arsenal manager Mikel Arteta, accelerated the postponement of top tier football in England.

It follows in the wake of the Serie A in Italy, Spanish La Liga, Dutch Eredivisie, Portugal’s Primeira Liga and the MLS in the USA having already taken measures to postpone fixtures for the foreseeable future, with all football-related activities being cancelled.

It’s not all doom and gloom, with the football community now devising a variety ways of keeping distracted as the sport takes an unfortunate hiatus. League Two side Leyton Orient have instigated a FIFA video game tournament with a widely circulated invitation that has attracted teams from across Europe. Starting with an aim of getting 64 clubs to participate, it wouldn’t be surprising if that number reaches well into the hundreds.

For the competition, 28-year-old Andros Townsend has become one of the first high-profile names to announce his involvement, representing his club Crystal Palace. The winger’s former team, Tottenham Hotspur has so far unaffected. Spurs’ first-team, lead by coach Jose Mourinho, and the academy were still in training, with no players so far showing symptoms of COVID-19 and thus avoiding a precautionary house arrest.

Over towards west London however, it’s a different story. The side Mourinho won three titles at, Chelsea, have had a knock-on effect from Hudson-Odoi’s diagnosis. Hudson-Odoi’s teammate Mason Mount earned the wrath of the Blues hierarchy by leaving his confinement to go for a kick-about with West Ham United’s Declan Rice in north London. The 21-year-old, supposed to be in isolation for a fortnight after his contact with CHO, reportedly had to be "reminded of his responsibilities".

The EPL’s most expensive player Paul Pogba is at least using his time well whilst the football season is postponed. It’s a double dose of donating and dabbing from the £89million Manchester United man. The France World Cup winner took to social media in conjunction with the World Health Organization to post guidelines to his 7.3 million followers,  instructing them to ‘Dab to beat coronavirus’: when you cough, and when you sneeze.

Those good deeds are coming thick and fast from the Frenchman. Pogba has now set up a fundraising page to support UNICEF to coincide with his 27th birthday (March 15). Pogba has appropriately set up a £27,000 target, a figure that he will personally double once it’s reached.

"The impact of a large-scale outbreak, especially on poor and vulnerable children, can be immense," Pogba wrote.

"It's my birthday and I'm always grateful that me, my family and friends are healthy. Nonetheless, not everybody is in good health right now. At times like this we need to come together."

The full amount goes towards disposable gloves, surgical masks and vented goggles for health workers coping with the outbreak.

Paul Pogba
@paulpogba
#Dab to beat #coronavirus. Follow @WHO advice to Be Ready for #COVID19 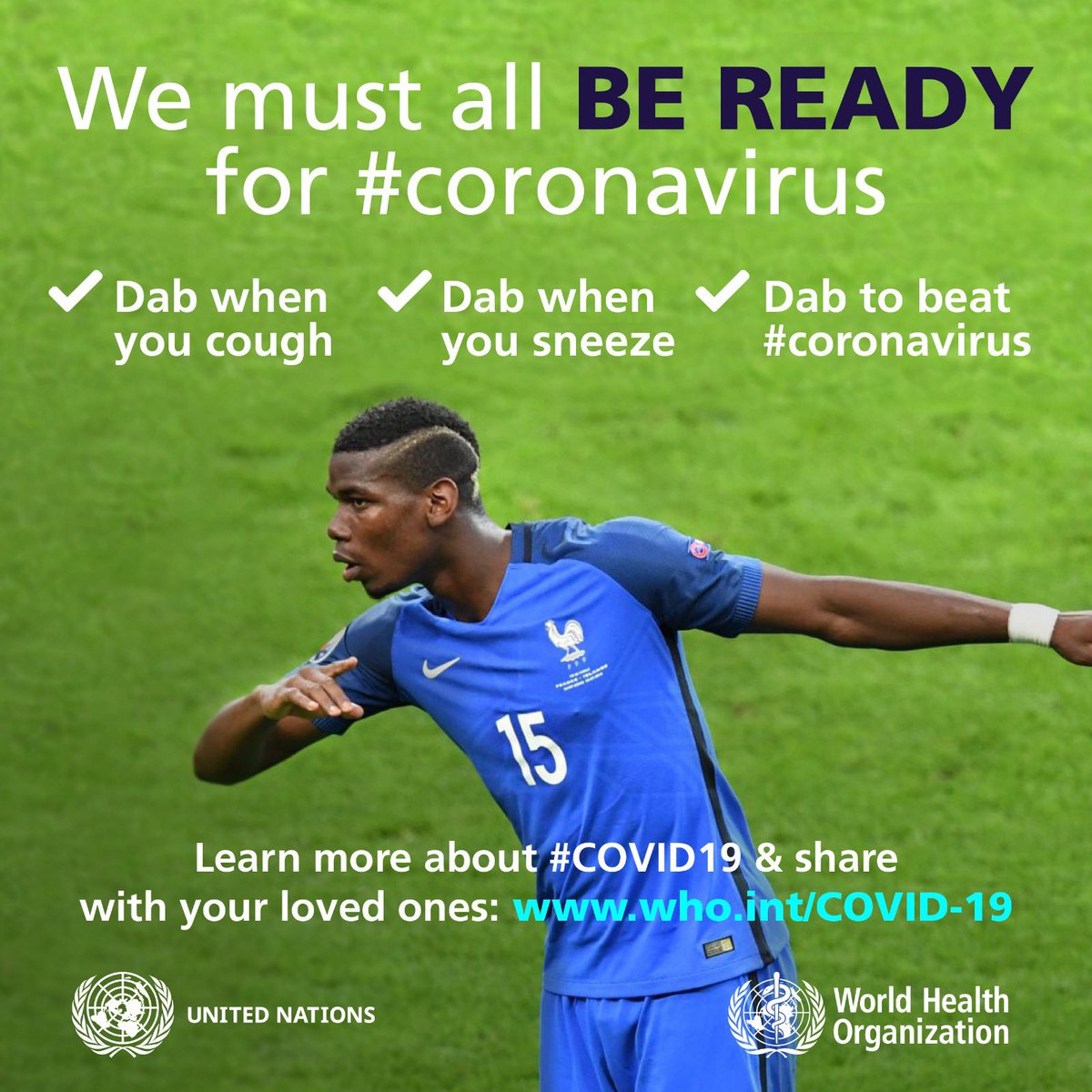 In other news, Pogba’s teammate Fred has been using his time a bit differently. The Brazilian midfielder has been spotted enjoying the wonders of Blackpool Pleasure Beach. Reports that he popped over to the Sandcastle are currently unconfirmed.

Another South American Paulo Dybala has been applying himself by keeping fit at home, The Juventus star is embroiled in the Italy lockdown. His teammate Daniele Rugani was the first member of the Bianconeri to have contracted COVID-19. Dybala meanwhile is more upbeat: “Keep on working out! And keep on smiling!” is his message.

Unfortunately, not everyone is Dybala and not everyone has their own private gym. Those with access to copious amounts of wine, however, can adhere to Dybala’s instructions by taking a leaf out of his Serie A rival Dries Mertens’ book. The Napoli striker took in the view of his glorious pad overlooking the sea whilst practicing his squats with a large bottle of el vino. How very, very continental.

The Sportsman
@TheSportsman
How Dries Mertens is coping with #coronavirus lockdown.
Have you ever seen anything more European...🍷
📱 Insta: @dries_mertens14
2
18

Alex Oxlade-Chamberlain has struggled for consistency in his Liverpool career, having been blighted by an injury that has reduced the opportunities for match-time. His absence from the pitch at the moment, is due to him going into self-isolation with girlfriend Perrie Edwards.

The Little Mix singer has been teaching the Ox some stellar dance moves, so he can at least employ those fast feet in a perfect synchronicity in a stair shuffle.

James Milner has to wait a little while to get his hands on his third Premier League title. Liverpool’s all-action utility man has knowingly stayed true to form of his moniker Mr Boring and has been rationing tea bags for the week. The Leeds boy’s brand of choice? It couldn’t have been anything other than Yorkshire Tea.

The Liverpool squad in its entirety have contributed to a £40,000 donation in support of the Fans Supporting Foodbanks charity, in collaboration with the LFC Foundation and the Red Neighbours initiative. The charity is unable to conduct their food banks scheduled for Liverpool and Everton match days, which the donation will go some way to compensate.

James Milner
@JamesMilner
Hey @Alex_OxChambo Barrels of laughs here in the Milner household as well - rationing the tea bags for the week👍👍
#crazydays
#somuchtogetonwith
#notgotthemovestocompete
7553
81271
More
football
Get Ready For A Nostalgia-Fest With Italia '90 Podcast Vincerà!
Hosted by Mark Godfrey and running from June 8th to July 8th, Vincerà! is a 24-part podcast series [ ... ]
football
Harry's Heroes, Vinnie Jones And Revenge At The Battle Of San...
When Vinnie Jones started crunching San Marino players left, right and centre, it was clear the friendly [ ... ]
football
Prodigal Talent Of The German Game Is Turning RB Leipzig Into...
This article first appeared in The Sportsman on 07/12/19 What were you doing at the age of 28? If it [ ... ]
football
''I Was Really Wasted'': When Jurgen Klopp Woke Up Hungover...
This article first appeared in The Sportsman on 05/09/19 Anyone watching the Amazon Prime documentary [ ... ]
football
Book Review - Yer Joking Aren't Ya?: The Story Of Middlesbrough's...
In 1997, Middlesbrough Football Club reached the finals of both the League and FA Cup, had the might [ ... ]
football
Carragher's Brilliant Podcast Shows The Greatest Games Are The...
What’s the greatest football game you’ve ever seen?  Jamie Carragher doesn’t [ ... ]
football
Red Bull And The Football Training Centre Of The Future... Today!
It is now 33 years since Red Bull sold its first ever energy drink. Pre-April Fool’s Day 1987 [ ... ]
football
On This Day Messi's Barcelona Tally Hits 500 In El Clásico Triumph
If you’re going to hit a milestone, and one that no one in your club’s illustrious history [ ... ]
football
The Secret Behind The Success Of Lineker, Shearer And Wright's...
The unavoidable hiatus to the broadcast of the BBC’s flagship football programme will not deny [ ... ]
football
Neymar Jr... Junior! Santos Like The Look Of Ronaldo-Imitating...
On March 7 2009, a slightly-built 17-year-old from Mogi das Cruzes, São Paulo, walked out onto [ ... ]
football
Business As Usual: A Beginners Guide To The Belarus Premier...
If you’re going out of your mind without your football fix, well we’re sorry you just haven’t [ ... ]
football
Why June 30 Could Be D-Day For The Fate Of Premier League Season
England captain Harry Kane has added his voice to the growing calls for the Premier League season to [ ... ]
football
You Heard It Here First - Brescia's Sandro Tonali Is Italy's...
Since winning the World Cup in 2006, it has been turbulent time on the international stage for Italy. [ ... ]
football
A Reunion With Ancelotti Could Resurrect Rodriguez's Stuttering...
No club chews up and spits out world class players quite like Real Madrid. Yet, their sense of entitlement, [ ... ]
football
'Quickly Kevin' Is The 90s Football Nostalgia Podcast To Beat...
While the majority of sports podcasts scramble to fill the minutes within the disruption of the [ ... ]
football
Where Did It All Go Wrong For Phil Neville And The Lionesses?
Winning, Phil Neville recently said at the SheBelieves Cup, is what would bring England’s women [ ... ]
football
''Drop A Few Hand Grenades'' Keegan's Advice To Scholesy The...
A packed out Wembley roared like one of those indomitable Three Lions to greet England’s new messiah. [ ... ]
football
Rise Of The Couch Coach: Coronavirus Causes 119% Surge In Football...
Thousands of us are flocking to virtual reality and gaming to help fill the void of no live football, [ ... ]
football
Review: Diego Maradona - Drop Yourself Into The Great's Chaotic...
When Diego Armando Maradona arrived at Napoli in 1984 for a world-record fee, the entire city ground [ ... ]
football
Arsenal's Tough Choice - Is Donyell Malen The Ying To Aubameyang?
Arsenal’s inability to manage the contractual situations of their biggest stars has plagued them [ ... ]
football
Robbie Fowler Is Making His Mark As A Manager With Brisbane...
The curtains came down on one of the last bastions of football standing in 2020 this week. Before the [ ... ]
football
Long Live The King: Eric Will Always Be Manchester United's...
“If ever there was one player, anywhere in the world, that was made for Manchester United, it [ ... ]
football
I Was There - The Day Football Came Home To Wembley
The closest I ever got to attending the original Wembley Stadium was on its final day in operation in [ ... ]
football
'Sunderland Til I Die' Heads To The Boardroom In Netflix's Second...
The docks have been left deserted. The wealth has dried up. Wearside has become an impoverished place [ ... ]
football
How Chief Creator Silva Became New Face Of Premier League
Football has been cast into uncertainty by the coronavirus pandemic. As it stands, nobody is sure if [ ... ]
football
Lookback:Chelsea 6-0 Arsenal When Arsene's 1000th Game Went...
It was supposed to be an occasion to celebrate for Arsene Wenger, but his 1000th game in charge of Arsenal [ ... ]
football
Ronaldo, Kane, Hazard - The Winners And Losers Of Euro 2020...
So as of this week Euro 2020 became Euro 2021. Another casualty of the global Coronavirus epidemic. [ ... ]
football
Time To Act And Move The Premier League Transfer Window
When my husband had an ear infection, I used my medical knowledge to help him. I said the best thing [ ... ]
football
Southgate Shows Strong Leadership With Rallying Cry To Fans
England head coach Gareth Southgate has sent a rousing message to national team fans as football continues [ ... ]
football
Lookback:Spurs And Chelsea's Eight Goal Thriller
In the three full seasons of Jose Mourinho’s first spell as the club’s manager, Chelsea [ ... ]
This website uses cookies
Cookies help us and our partners provide statistics. By browsing this website, you consent to the use of cookies in accordance with our Privacy Policy and Cookies Policy.
Accept & Close