Football
News
The Manchester United midfielder has played more minutes than any other player at Euro 2020 since last May
Hector Nunns
09:05, 18 Jun 2021

Bruno Fernandes should by rights be utterly exhausted  - but the Manchester United talisman is ready to run himself into the ground to assist in Portugal’s European Championship title defence.

The 26-year-old Manchester United star has endured a physically gruelling and almost non-stop last 13 months both on the international front but especially for his Old Trafford employers.

A run to the seemingly endless Europa League competition after dropping down from the Champions League, eventually losing to Villarreal in that mind-blowing penalty shootout, contributed to a marathon campaign for Ole Gunnar Solskjaer’s team.

And that means since May 2020 Fernandes has purely and simply played more (81 matches, and a total of 6,472 minutes) than any other player turning up for Euro 2020 for club and country. The talented playmaker comes in narrowly ahead of Harry Maguire, his United team-mate and England defender, on 6,459 minutes.

And Fernandes said, “I’m the player among all playing in the competition with the most minutes in his legs, yes… and I intend to keep it that way.

“I hope I can put some pressure on our national coach by saying this. I don’t feel tired: forget about it. It’s the opposite.

“And it’s very good: I’ve always told everyone: my plan is to play at the top level as much as possible at the maximum of my abilities.

“I want to be involved in every possible trophy and title conquest! Now, the goal is to help national team, no matter if the coach puts me to play or on the bench.

“If I don’t get on the pitch during the match, I’ll force the tempo in practice, in order so that my team mates will be better prepared for the matches and what they will face.

“I still cannot say if this Portugal squad is stronger than the one that won the Euros five years ago, in France. It’s too soon to call, just after one match.

“But I can certainly warn you that our goal is the same – to lift the trophy. And this team is certainly not worse than the one you saw in France. We want to win every game, and the tournament.” 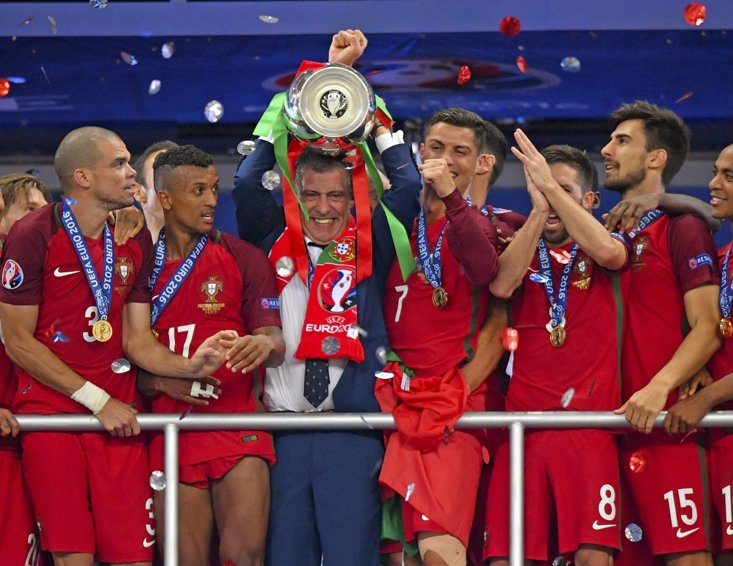 Portugal are hoping to defend their crown this summer

Next up for Portugal is Germany in Munich on Saturday, with Portugal in good shape after the 3-0 win over Hungary, and the Germans needing a result after their 1-0 loss to France.

Fernandes added, “Every match is a dog fight, and points are becoming more and more important, regardless of who is playing who.

“We know about the individual quality of the German players and their power as a team. They were world champions in 2014.

“But we know what we have to do to achieve our goal: another win. Regardless of the 3-0 win against Hungary on our first match, there are still lots of things to correct and improve.

“To beat Germany we need to have the ball, possession and control the game, and not make any mistakes in those ‘one second decisions’ during the match…plus we have to score.”

In an emerging new order in the Portugal team, with Cristiano Ronaldo entering the twilight of a stellar career that promises several more records broken, set, equalled or extended during Euro 2020, Fernandes will be assuming ever more responsibility – just as he has at United.

There were 28 goals and 17 assists in all competitions for the Red Devils last season, and Fernandes will be looking to cut loose in a similar fashion for his country, where there have been to date just four goals from 30 caps.

There is a system in place engineered by Fernando Santos to have Ronaldo on the spot to finish without doing as much running as he once did, and while it works as well as it did against Hungary in the late stages, the likes of Fernandes, Bernardo Silva and Diogo Jota can hardly complain if it slightly limits their own goalscoring opportunities.

Quite the opposite – Fernandes is quick to hail Ronaldo’s enduring contribution after he closed to within just three goals of the all-time international scoring record of 109 set by Iran’s Ali Daei.

Fernandes said, “Cristiano is already being decisive at these Euros. Everyone knows about his ability and capacity, and how easy it seems for him to score goals.

“But he is always also the first one to underline that what matters is the team. Everyone in our group tries to follow his advice: give his own best for the team.

“And he’s the first one to inspire and to be an example, as the world saw in the match against Hungary with his two goals.”