Us Sports
News
The Sportsman caught up with the performers who made Clash At The Castle a night to remember
Joey Mills
15:00, 07 Sep 2022

WBC heavyweight champion Tyson Fury stands in a ring in front of 62,000 fans. The towering boxer serenades his audience with his signature borrowed Don McClean tune, ‘American Pie’. But he is not alone. Among the cacophony of voices from England, Ireland, Wales, mainland Europe and beyond is a decidedly Scottish tone. This is not the aftermath of a ‘Gypsy King’ title defence. This is the epilogue of WWE Clash At The Castle, and that Ayrshire baritone belongs to ‘The Scottish Warrior’ Drew McIntyre.

The Sportsman caught up with the former two-time WWE Champion on the eve of his bout in the main event of the first WWE premium live event in the UK for 30 years. At the last one, SummerSlam 92, the iconic British Bulldog defeated Bret ‘The Hitman’ Hart in a classic bout to lift the Intercontinental Championship. Now it was Drew’s turn, with the 37-year-old meeting the imposing WWE Undisputed Universal Champion Roman Reigns in the main event at the Principality Stadium in Cardiff.

That 30 year wait for a WWE stadium show in the UK had weighed heavily on Drew. It turns out his backstage efforts were a big reason for Clash At The Castle taking place. “Non-stop, I never shut up about it. All I got was time difference, logistics until we did the Australia supershow. So I said “there's no bigger time difference than Australia”. Right now we’ve got the (WWE) Network, we can do it at any time. The UK fans deserve it, you know it will make big money. More importantly the fans will be unbelievable, the superstars will enjoy it and it’ll be a show to remember.”

While McIntyre has held the WWE Championship twice, both reigns came behind closed doors during the pandemic. Clash felt like the perfect time for him to lift the title in front of a home crowd in the UK. Alas, Reigns won an excellent main event with help from the debuting Solo Sikoa. But McIntyre is keen to see the company return to these shores for future premium live events. After this rapturously received card, wrestling fans feel the same way.

For the uninitiated, WWE offers a presentation unlike any you’ll find in sports or entertainment. Proceedings were opened with a wonderfully energetic DJ set from Zoe London, fresh from rocking the summer festivals. A giant videotron castle hung above the stadium while a glowing ramp was also adorned with screens. WWE SmackDown Women’s Champion Liv Morgan summed up the attention to detail the company had put into making this event feel special. “The magnitude of the situation just feels different. It kind of feels like WrestleMania you know. WrestleMania is our biggest show of the year and this feels like WrestleMania.” 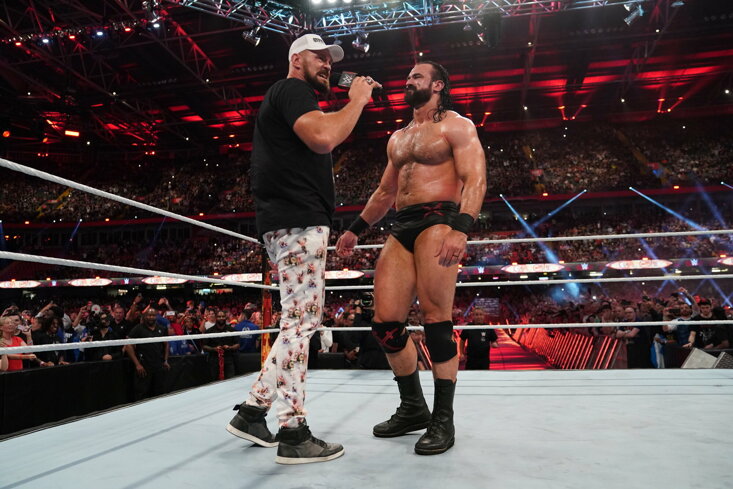 Perhaps the second-most anticipated match on the card ended up being one of the most eventful. The legendary pairing of Edge and Rey Mysterio took on Judgment Day, comprised of Damien Priest and Finn Balor. While the teams were all business in the ring, Priest spoke highly of the influence his iconic opponents have had on his career.

“I feel like I'm a different performer just having worked against them. You can't help but get better and step up your game. Just because of the calibre of people that I'm surrounding myself with, whether it's against or teaming with.”

The performers he’s teaming with, Balor and Rhea Ripley, have thrived as part of the dark, gothic-leaning Judgment Day faction. Ireland’s Balor has been almost a career good-guy in WWE and is embracing this change in attitude.

“It's something that I've wanted to do in WWE for a long time. We tried to do it in NXT, a heel version of Finn. We lost the interactive aspect of the plan due to COVID. So this is the first time I’m getting the opportunity to be a true heel in the WWE and it's something that I feel like I do better than I do a babyface. I don't really have to try very hard. I’ve just got to be my normal pissed-off self.”

Rhea Ripley has found the group similarly liberating. Her place in the crew is as a powerful equal to Balor and Priest, often taking centre stage in their tormenting of the Mysterio family. “There’s definitely an evil side of Rhea Ripley and it's fun to let it out. I’ve definitely got the platform now and I'm very, very excited. I get so pumped for the shows every Monday because I'm just like, ‘What can I do today to screw with people?’ I love being a menace.”

Women have not always been allotted such meaty roles in WWE programming. But the company has come on leaps and bounds, with female superstars having main-evented WrestleMania events in recent years. Ripley appreciates the shift, as well as those who went before her.

“It's so wild to see how far the women's division has come from being divas. And being in bra and panties matches seeing all the stuff that those women had to be put through. What they fought for in their careers to get to where we are today is absolutely incredible. Main-eventing Wrestlemania, like Sasha Banks, and Bianca Belair, incredible. It's such a long, long way. I can only imagine how much further it's gonna go in the future.” 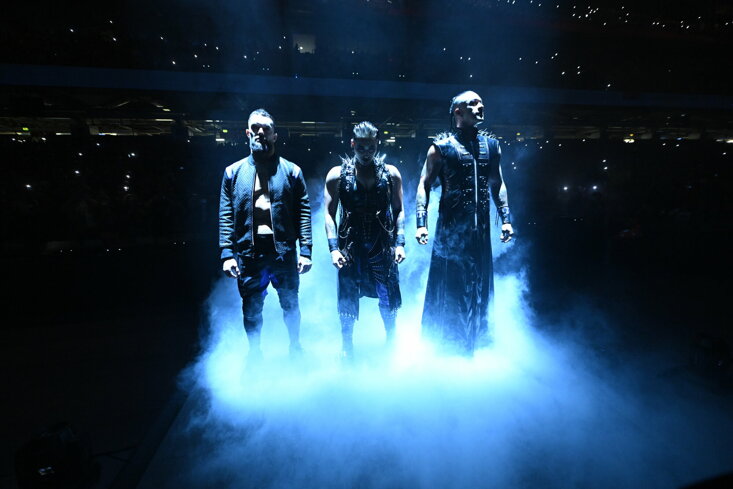 Judgment Day made a huge impact on the night, with Rey Mysterio’s son Dominick turning on Edge and his father to join the faction. It was one of a galaxy of highlights on the card. Bret Hart received a deafening ovation when introduced to the crowd, in recognition of his classic with the Bulldog. Sheamus and Gunther did those two men proud with their own Intercontinental title classic, which was quite simply one of the greatest matches you could ever wish to see. There was a frenetic and exciting six-woman tag bout featuring Bayley, IYO SKY and Dakota Kai taking on Alexa Bliss, Bianca Belair and Asuka. Matt Riddle and Seth Rollins resumed their hostilities in a superb bout. Everywhere you looked there was action, tension and excitement.

One hopes there is not another 30 year wait ahead for WWE’s stadium return. With football grounds across Britain capable of hosting a show on this scale, and an enthusiastic fanbase who sung their hearts out from first bell to last, the company simply has to return. You’ll never see an event quite like WWE anywhere else. If they do return, you owe it to yourself to be there.