Sports
News
How Bryan Danielson went from a career-ending injury to an exciting new chapter in his career
Joey Mills
18:58, 07 Sep 2021

Daniel Bryan is dead. Long live ‘American Dragon’ Bryan Danielson. Whatever you know him as, one of the greatest professional wrestlers of his generation arrived in All Elite Wrestling on Sunday night at All Out. As with CM Punk’s arrival, it had long been rumoured that the former five-time world champion would join AEW, and he was met with a hero’s welcome at the Now Arena in Chicago, Illinois. As the debutant soaked in the adoration, a smile on his face as 10,000 fans who grew up on his incredible body of work cheered his name, perhaps a thought crossed his mind. The thought that he nearly didn’t make it here. The thought that his career could have ended.

Danielson was forced to retire from in-ring competition in 2016 due to accumulated issues relating to concussions. Neurosurgeons found that Bryan had suffered a minimum of ten concussions in his career, and found a lesion on his brain. Bryan had suffered post-concussion symptoms such as seizures, a sad echo of the issues that led to the retirement of the great Bret ‘The Hitman’ Hart.

Danielson campaigned passionately to be allowed to return to the ring. He managed to get medically cleared by a doctor from the NFL’s Arizona Cardinals, and passed a UCLA concussion test, but WWE’s own medical team would not allow Bryan to return. This led the wrestler to ask for his release, with offers on the table from Mexico’s Consejo Mundial de Lucha Libre and America’s Ring Of Honor, where Danielson had once reigned as world champion. WWE would not countenance this, and the Washington native transitioned into an on-screen non-wrestling role. 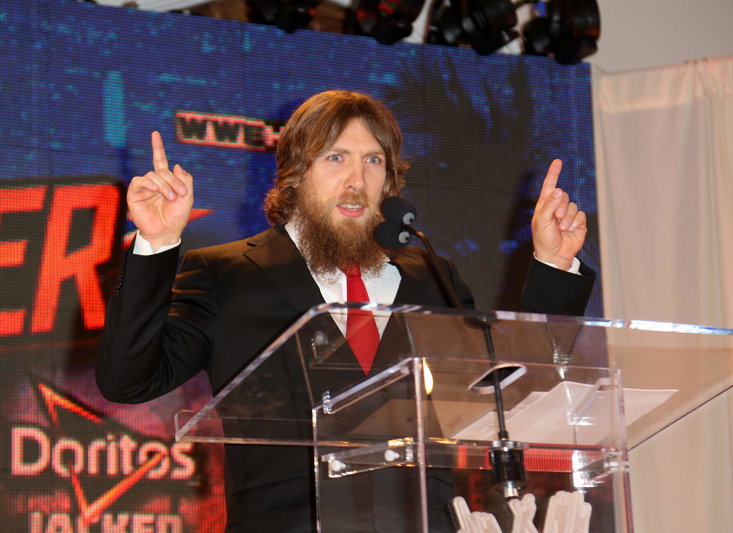 It would take two years, several independent reports from neurosurgeons, concussion experts and neurologists, and another evaluation from WWE’s in-house physicians before Danielson’s wish would be granted. He returned to the ring at WrestleMania 34 in 2018, teaming with Shane McMahon to defeat Sami Zayn and Kevin Owens. Bryan enjoyed a largely fruitful three years back in WWE. Billed as ‘The New’ Daniel Bryan, the grappler’s real-life veganism was weaved into storylines, and when he claimed the WWE Championship he declared himself ‘The Planet’s Champion’. Memorably, he replaced the leather title belt with one made from sustainable hemp.

Bryan headlined this year’s WrestleMania, in a tremendous encounter with Universal Champion Roman Reigns and Edge. He would only be seen once more on WWE screens, dropping another match to Reigns on SmackDown, before his contract expired. Behind the scenes, it has been reported that Vince McMahon and his team were pushing hard for Bryan to sign a new deal, and many people expected him to accept one. But instead he has chosen to leave for pastures new.

For those that have followed the career of ‘American Dragon’, the reasoning is clear. A wrestling purist at heart, Bryan ascended to the very top of independent wrestling by taking on an illustrious list of wrestlers from all over the world. Becoming schooled in US catch-as-catch-can, British ‘all-in’, Japanese puroresu and Mexican lucha libre, Danielson became the most complete ring technician of the modern era. While WWE promotes a theatrical, ‘sports-entertainment’ methodology, Danielson must yearn for the range of styles and opponents of his freelance days. In AEW, he can find this variety.

Just taking the AEW All Out show on which he debuted for example, there was ex-WWE sports entertainers (Paul Wight, Chris Jericho), Japanese legends (Satoshi Kojima, Minoru Suzuki), expert luchadores (Rey Fenix, Penta El Zero Miedo) and modern high-flyers (the Young Bucks, Darby Allin). Arguably no other wrestling company currently enjoys the roster depth and variety that Tony Khan’s group can provide. Bryan Danielson’s years in WWE have made him a rich man. With his career restored after appearing to be over, AEW can make him a fulfilled one.