While Manchester City were racking up an unbeaten 28-game run, one of their former trophy-winning alumni was setting a similar record on the international stage. Roberto Mancini, the man in charge at the Etihad Stadium when Sergio Aguero scored that goal to clinch the 2012 Premier League title, is Italy’s head coach heading into the Euros and wow, has he done a fine job?

The 56-year-old, who was born in Jesi, Ancona in east Italy, has proudly led his country since now for three years and the Azzurri haven’t tasted defeat in their last 25 games. They have won 20 of those matches too.

Mancini was appointed in May 2018 after Italy, one of the most successful and iconic nations on the planet, failed to qualify for the World Cup in Russia. Wounded, the team licked it’s wounds and under their inspiring coach, they have returned with a vengeance and will be one of the favourites heading into this summer’s tournament.

They qualified for Euro 2020 in emphatic style with ten wins out of ten, scoring 37 goals and conceding only four times in a group featuring Finland, Greece and Bosnia and Herzegovina. Italy have kicked off World Cup qualifying in a similar vein. Mancini’s men have won three from three and are yet to concede. 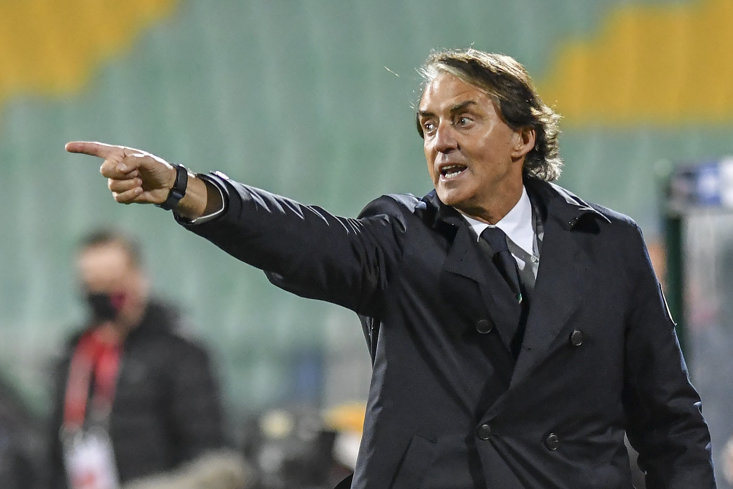 Winning the World Cup in 2006, the decade that followed saw Italy lose the Euro 2012 final while they reached the quarters in 2008 and 2016. The nation that produced Paolo Maldini, Roberto Baggio, Alessandro Del Piero and Francesco Totti and was home to the booming Serie A of the nineties, didn’t boast the same glamour during the 2010s when it came to names and prestige.

Looking at their winning run now though, Wales, Turkey and Switzerland will fear facing the Azzurri in Group A.

In goal, they boast Gianluigi Donnarumma. He is still only 22 but has made 246 appearances already for Milan, earning 25 caps for his country and he has been tipped to be one of the finest stoppers of his generation.

In front of him, Juventus stalwarts Giorgio Chiellini and Leandro Bonucci, with more than 100 caps each, are joined by the likes of Lazio’s Francesco Acerbi while West Ham defender Angelo Ogbonna last played in 2020. In midfield, Mancini has plenty of options to choose from, with a host of players shining in the build-up to reaching their prime, including Inter duo Nicolo Barella and Stefano Sensi, Manuel Locatelli of Sassuolo and Roma’s Lorenzo Pellegrini. Milan’s Sandro Tonali at 20, is another one to watch.

In attack, Ciro Immobile is always a threat and has 148 goals for Lazio in five years, hitting 39 last term and is joined by Torino frontman Andrea Belotti, a target for the Premier League’s top clubs and Napoli playmaker Lorenzo Insigne.

Having won the Euros only once in 1968, could Italy win again 53 years later? While this isn’t the most star-studded line-up, there is plenty of talent in this squad and they are being coached brilliantly. They will be extremely resolute and hard to beat.

Check out our other Group A previews: Turkey, Wales and Switzerland