Sports
News
After the trailer for 'King Richard' dropped this week, we've taken a look back at ten of our favourite sports biopics
Kieran Spratt
12:29, 29 Jul 2021

This week saw the trailer drop for King Richard, a brand new biopic of Richard Williams, father of tennis supremos Serena and Venus, starring Will Smith as the main man himself. Early impressions have been great and the film has already been touted as a potential Oscar darling when it releases in November.

That should come as no surprise though, as some of the greatest films ever have taken their inspiration from the exploits of the real life characters within the world of sport and ‘King Richard’ will likely be no different. Below we take a look at ten of our personal favourite sports biopics.

The best boxing film ever made? Martin Scorsese’s Robert De Niro-starring 1980 biopic about the life of the tortured pugilist Jake LaMotta destroying everything inside and outside of the ring remains one of the most influential movies ever made.

There’s beauty in barbarity sometimes and never is that more clear than in Raging Bull. This is quite simply Scorsese’s Magnum Opus. 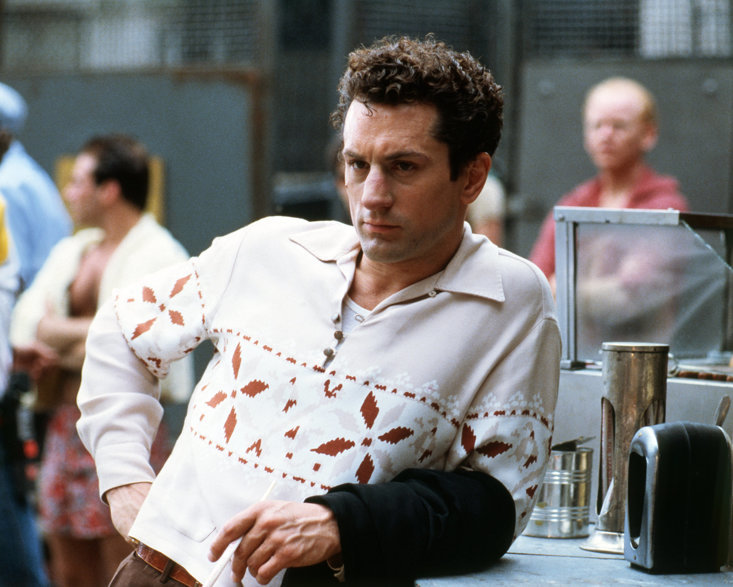 Brian Clough’s career was tailor-made for the big screen and the story of his ill-fated 44-day tenure at Leeds United is considered one of the greatest football films of all-time.

Directed by The King’s Speech Oscar-winner Tom Hooper and with a screenplay adapted by Peter Morgan (Frost/Nixon, The Queen), The Damned United was released to widespread critical acclaim despite a few historical inaccuracies. Michael Sheen as Clough and Colm Meaney as his arch-nemesis, Don Revie, put in a pair of spectacular performances.

A sports film about algorithms!? Fear not if you haven't seen this baseball biopic of Oakland Athletics’ general manager Billy Beane and his quest to build a team of undervalued talent by taking a sophisticated sabermetric approach to scouting, as it is far more compelling than it sounds.

This is more of a cerebral sports biopic than others on this list, thanks in part to Aaron Sorkin’s (The West Wing, The Social Network) dynamite script adapted from the 2003 novel of the same name. The film garnered six Academy Award nominations in total.

Like Moneyball, this one comes from director Bennett Miller although the source subject of this biopic is much, much darker. Following John E. du Pont’s unsettling relationship with wrestlers Mark and Dave Schultz, the film shows The Office’s Steve Carrell as he’s never been seen before. With a prosthetic nose and demeanour that would have Michael Scott bolting from Scranton in seconds, du Pont is the most terrifying portrayal on this list.

The film earned plenty of nominations at the Oscars and Golden Globes but perhaps its biggest triumph was picking up the Best Director award for Miller at the 2014 Cannes Film Festival. 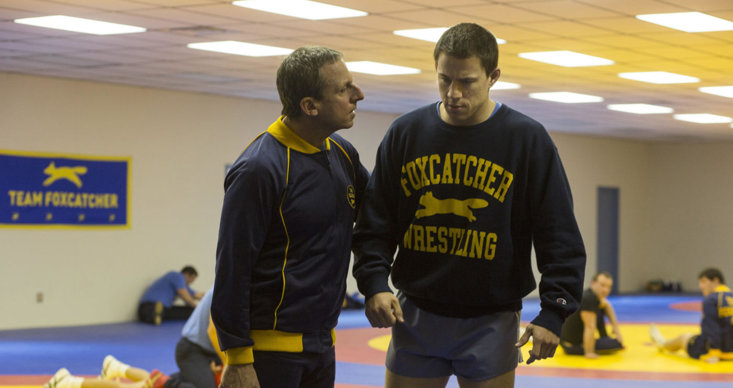 Hands down the most inspirational film on this list. Rudy is the story of Eugene ‘Rudy’ Ruetigger, played by the Lord of the Rings’ Sean Astin, a steel mill worker who dreams of playing college football despite lacking the grades and money to attend or the height and stature to play.

Rudy is peak-Hollywood cheesiness, but it’s great and teaches us all a valuable lesson - nothing is impossible if you work hard.

David O’Russell directed this biopic on Micky Ward, a boxer who competed between 1985 and 2003. The film was a passion project of Mark Wahlberg’s, and given Ward was “a local sports hero” to the Boston native, there were few people more fitting to step into Ward’s shoes than the Boogie Nights actor.

Though ostensibly a film about Ward, The Fighter is at its best when focusing on his half-brother and former boxer Dicky Ecklund played by Christian Bale. Bale, alongside Melissa Leo, both won Oscars for their performances in the film.

One of the most famously spoofed films of all-time, Chariots Of Fire is a bona fide classic when it comes to sporting biopics. From director Hugh Hudson, Chariots centers on British Olympians Harold Abrahams and Eric Liddell, two runners from very different backgrounds who go on to win gold medals at the 1924 Games.

Based on the true story of Herman Boone, portrayed by Denzel Washington, and the coach’s attempt to integrate the T.C Williams High School football team in Virginia in 1971. Remember The Titans is one of the most beloved and financially successful American football films ever.

The message of the film is a little on the nose sometimes, thanks to Hollywood’s tendency for cliched sentimentality, but its heart is in the right place and sport films don’t get more inspiring than this. Oh, and Denzel knocks it out of the park once again. 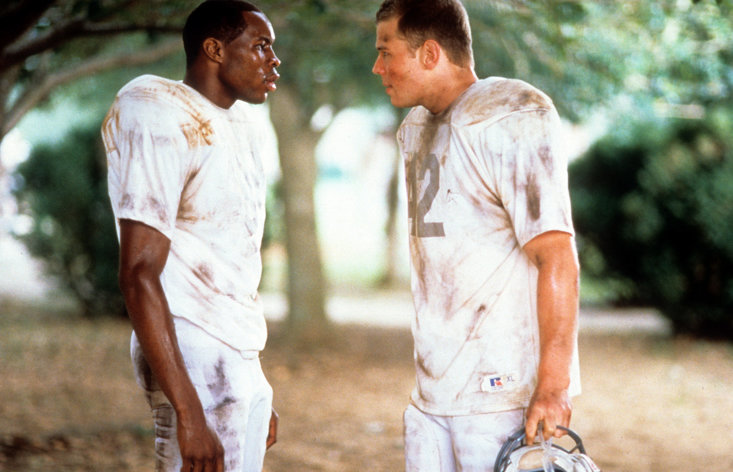 People aren’t the only sports stars that have thrived at the movies - take this heroic horsie for instance. This film focuses on the life and career of Seabiscuit, an undersized and overlooked Thoroughbred, whose underdog successes made him a media sensation across  the United States throughout the Great Depression.

Like some of the films on this list, Seabiscuit does get a little too sickly at times but it is nonetheless an epic portrayal of one of the most inspiring figures in sports history.

The story of Michael Oher, who overcame an impoverished upbringing to star in the NFL, is as heart-warming as they come.

When The Blind Side was released in 2009 it was an immediate hit, transforming its $29m budget into a whopping $309m and earned a Best Actress Academy Award for Sandra Bullock, who put in a career-best performance.

x
Suggested Searches:
Manchester United
Liverpool
Manchester City
Marcus Rashford
Premier League
More
sports
How Elite Athletes Like Ronaldo And LeBron Have Adapted Their...
Cristiano Ronaldo’s goal for Manchester United in their 2-1 loss to Young Boys last night showed [ ... ]
sports
Teenage Kicks: Raducanu Joins Elite Group Of Top British Sporting...
Emma Raducanu stunned the world with her incredible US Open final win in straight sets over Leylah Fernandez. [ ... ]
sports
Enter The Dragon: Bryan Danielson Shakes Off ‘Daniel Bryan’
Daniel Bryan is dead. Long live ‘American Dragon’ Bryan Danielson. Whatever you know him [ ... ]
sports
The Shape Of Punk To Come: AEW Return To Chicago For All Out
AEW returns to pay-per-view with All Out on Sunday night, broadcasting live from the Now Arena in Chicago, [ ... ]
sports
Rebuilding Ric Flair: How Vince McMahon And Triple H Saved 'The...
‘Nature Boy’ Ric Flair returned home on Sunday night, when he made his return to the National [ ... ]
sports
The Superhuman Superstars Inspiring A New Generation At The...
The Paralympics are well underway and some of the most inspirational humans the world has to offer are [ ... ]
sports
From Undisputed To A Little Bit Of The Bubbly, Chris Jericho's...
Wrestling legend Chris Jericho will put his career on the line when he faces MJF at AEW All Out on 5th [ ... ]
sports
From Fireworks In France To Disco Demolitions: The Ugliest Conclusions...
Last night we saw the match between OCG Nice and Marseille abandoned as a result of disgraceful behaviour [ ... ]
sports
Many Happy Returns - Becky Lynch And Brock Lesnar Shake SummerSlam
‘Comeback’ was the key word at WWE Summerslam on Saturday night as over 50,000 fans at Allegiant [ ... ]
sports
Sports vs Videogames: When Tyson, Zlatan and LeBron Raged Against...
After a drawn-out legal dispute, Manchester United will be renamed ‘Manchester UFC’ on the [ ... ]
sports
From Ruthless Aggression To Out-Rapping The Rock, John Cena’s...
John Cena takes to the ring on Saturday in his first pay-per-view main event for over three years, when [ ... ]
sports
CM Punk Prepares To Return - Will He Drop Another ‘Pipe Bomb’?
While nothing is 100% sure in the world of pro wrestling, all credible indicators point to the fact [ ... ]
sports
WWE SummerSlam Brings Cena, Edge And More To Nevada
SummerSlam has traditionally been WWE’s second-biggest event of the year, below only WrestleMania [ ... ]
sports
Farewell Tokyo, Hello Paris! How Will Team GB Look At The 2024...
So the curtain has come down on Tokyo 2020 and although this was the ‘extended version’ [ ... ]
sports
Kenny's Keirin, Brown's Bronze & The Sportsman's Highlights...
The Tokyo 2020 Olympic Games might be over but they have left The Sportsman’s team with plenty [ ... ]
sports
Another Astonishing Olympics For Team GB - But Is This The Peak?
We didn’t know if it would even take place, but the sun has set on a Tokyo Olympics that has thrilled [ ... ]
sports
Day 14 Olympics Round-Up: Kenny Becomes First Female Brit To...
We are in the final straight of the spectacle that is Tokyo 2020 and while this great Olympics is drawing [ ... ]
sports
Day Eleven Olympics Round-Up: Thompson-Herah Wins Double-Double...
An astonishing day of Olympic action unfolded in the Japanese capital as there were more golds for Team [ ... ]
sports
Mixed Events Are Here To Stay After Team GB's Tokyo Olympics...
Tokyo 2020 has seen the introduction of some new encapsulating mixed events that could be the future [ ... ]
sports
Italy Continue To Defy The Odds As Perfect Summer Continues...
There could be no such thing as the perfect summer of sport, but if there is, Italy are experiencing [ ... ]
sports
Day Ten Olympics Round-Up: GB Win Eventing Gold As Simone Biles...
Day 10 of Tokyo 2020 had plenty to offer as Team GB claimed another gold to add to their impressive [ ... ]
sports
Day Eight Olympics Round-Up: Relay Gold For Team GB Despite...
Team GB enjoyed more success on day eight of Tokyo 2020 as further history has been made in these historic [ ... ]
sports
From Dina To Daley, Here's What's In Store For Week Two At Tokyo...
The first week of Tokyo 2020 has been full of excitement and has produced some great entertainment. [ ... ]
sports
Day Five Olympics Round-Up: Mallory Franklin Takes Silver In...
Day six of Tokyo 2020 brought more excitement and Great Britain managed to pick up a few more medals [ ... ]
sports
Day Five Olympics Round-Up: GB Relay Team Storm To Gold & Dujardin...
Tokyo 2020 continues to thrill, with Great Britain collecting more medals on Wednesday and some high-profile [ ... ]
sports
Simone Biles Should Be Applauded For Her Withdrawal, Says Mental...
Simone Biles’ decision to withdraw from the all-around gymnastics final has been applauded by [ ... ]
sports
Day Four Olympics Round-Up: More Medals For Team GB In Best...
Great Britain has never had such a successful start to an Olympic Games. As day four comes to a close, [ ... ]
sports
Tokyo Olympics Day Three Round-Up: Team GB Enjoy A Magic Monday
It was a thrilling Monday for Team GB as the squad brought home five medals, including three golds, [ ... ]
sports
From Child Prodigy To Champion, Tom Daley Succeeds In Quest...
It has taken four Olympic Games, but Tom Daley finally claimed his first gold medal alongside Matty [ ... ]
sports
Tokyo Olympics Day Two Round-Up: Team GB Get Medal Tally Up...
There was finally some medal success for the Brits, a match to forget for the USA’s men’s [ ... ]