Us Sports
News
The Sportsman's Sam Penfold was part of the Titans squad which won the national final on Saturday
Sam Penfold
13:05, 05 Sep 2022

The Sportsman’s own Sam Penfold is not just our go-to source of everything NFL and social media whizz, he’s also a wide receiver for the Manchester Titans. And on Saturday they stunned the British game by winning Britbowl XXXIV. So how does it feel to be a national champion?

Waking up as a national champion on September 4th was quite the feeling. On Saturday, the Manchester Titans went to the capital and defeated the once feared London Warriors 37-7 to claim the British American Football crown. To say people had doubted our ability would be an understatement. But, just like we knew we’d have to, we rose to the challenge and snatched our title.

The day was something I never thought I’d be a part of. It was truly special, and while individuals were nervous, the team itself was confident and assured. We weren’t in the final by chance, we deserved to be there. The nine months of preparation prior had made sure of that. The cold and wet February practice sessions, the scorching Sunday mornings that left everyone with dodgy tan lines and clothes drenched in sweat, the long periods in the gym, the countless hours spent scheming and watching game film to study the opposition. The Titans deserved everything we got this year and we’re sick of people doubting us. Having said that, keep doubting. We’ll be back next season and we’ll be better than ever.

Having showed up to New River Stadium around 14:15, we put our bags and practice pads in our designated room and headed out for some pre-game walkthroughs. Standard procedure before every game. As we headed out for that, our opponents for the day, the 11-0, heavily-favoured London Warriors stood around greeting each other looking self-assured. After our walkthroughs we went back into the changing rooms to get ourselves ready for our 16:00 warm-ups. Music was pumping through the room, people getting into their zone. It was clear the occasion had people locked in. We were solely focused on our goal. To win and become Britbowl champions.

As we went out onto the field to warm up, with the team all in kit and raring to go, some of the Warriors’ players casually threw a ball around, others stood on the sideline nonchalantly getting into their kit. There was no urgency. They weren’t worried about us. That was their first mistake.

The game kicked off and the sideline was buzzing with anticipation and excitement. A steady first drive on offence included a hurdle from former NFL academy running-back Tom Jones that sent us wild. Cries of “That boy different” rippled along the sideline. We came away from that drive feeling confident that this game was there for the taking. Out go the defence. London might’ve been called the Warriors but it was our defence who looked better suited to the name as big tackles and hits rained down on the London offence. We made it clear to them that we weren’t here to take part, we’d come to be taken seriously and we’d come to win. The first quarter ended 0-0 but our offensive coordinator, Luke Carlton, was scheming away and had a plan. 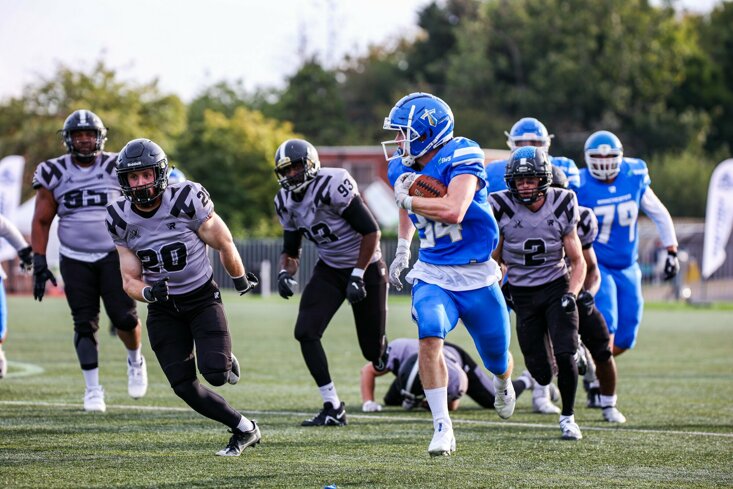 TOM JONES MAKES A BURST AS THE TITANS TAKE COMMAND

On third and goal early in the second quarter our quarterback, Sam Bloomfield, threw a beautifully placed dime into the corner of the endzone for Adam Bamber to catch and score his 13th touchdown of the season, the 33rd since I’d arrived. The extra point was good and we took the lead. Titans 7-0 Warriors. We didn’t look back.

The defence forced a punt again and the offence trotted back out onto the field. Remember Tom Jones, that lad who hurdled someone early? Yeah, he’s a baller. Taking the hand-off on his own 40-yard line, he followed his block and broke free down the sideline. They were never catching him. Titans’ touchdown number two and we lead 14-0. The Warriors looked stunned.

We were building serious pressure. The pass rush of Cade Makin and Joe Partington limited the Warriors QB’s ability to escape the pocket, the Titans linebackers provided heavy reinforcement down the middle as the cornerbacks and safeties shut down the aerial threat from the Warriors. As the halftime whistle approached, Bloomfield found Bamber once again and the Manchester Titans were 21-0 to the good. It was surreal. But we couldn’t let up and the Warriors hit a deep ball with under a minute to go in the half. 21-7 was the halftime score.

We expected adjustments in the second half but from my point of view I didn’t see much of a difference. I’ll dish the credit out to our offensive and defensive play callers for being adaptable and making non-stop adjustments to whatever the Warriors tried to throw at us. A stunning interception from one of our most improved defensive players this season, Dee Kay, gave us an electric shock of belief to kick-start the second half. Another calculated drive down the field and a pinpoint ball from Bloomfield to Ben Martin restored the Titans’ 21-point lead heading into the fourth quarter.

The last 15 minutes saw more defensive shut downs, and a field goal from Aaron Bowcott gave us a 31-7 lead. That was when we knew it was over. It was just a matter of time. With about five minutes left on the clock, George Slade intercepted a wayward Warriors pass and returned it for a pick six and made the score at 37-7. The sideline erupted. Relief and joy flooded onto the faces of the coaches and players scattered across the pitch. 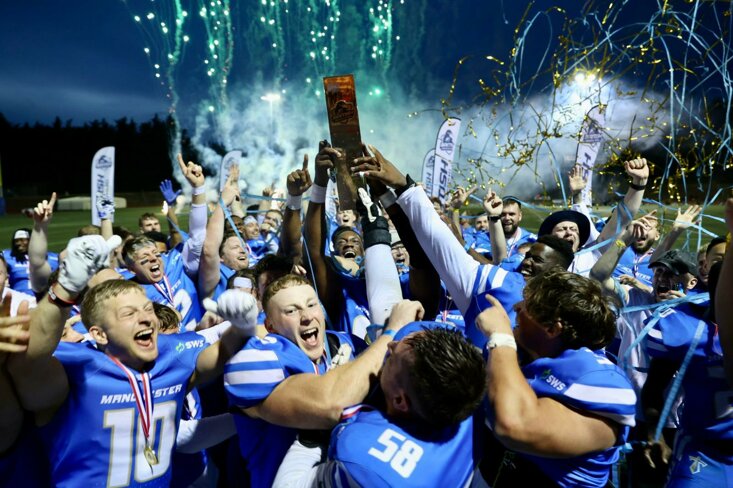 SAM (LEFT, NO.10) JOINS THE CELEBRATIONS

On the sound of the full time whistle, players dropped to their knees, tears of happiness flowed, with hugs and high-fives endless. The Manchester Titans were Britbowl champions. Some of the team had been working towards this for years. Others, like myself, had only joined in recent times but the feeling was like no other. We had silenced every doubter, overturned every obstacle and reached the ultimate goal. The goal our head coach Jonathan Homer had set in January. The goal we’d chased every training session and matchday since. Britbowl? Completed it mate.

“This is Manchester. We do things differently here.” That’s what we’ve been saying all year and, lo and behold, we came out on top at the end of the British American Football season. The Manchester Titans are your new Britbowl champions. Could this be the start of a new dynasty? Tune in next season to find out.