Us Sports
News
Swinger has worked for almost every major promotion over the last three decades
Joey Mills
13:00, 25 Oct 2022

Saying a wrestler has seen it all is an overused cliche. But when you’re talking about Johnny Swinger, who worked for every major US wrestling promotion during the biggest boom period the industry has ever seen, it’s almost an understatement.

‘The Swingman’ sat down with The Sportsman to share his experiences of WCW’s dizzying highs, ECW’s rabid fanbase and his current role as Impact Wrestling’s hilarious old-school veteran. Join us as we step into Swinger’s Palace.

It’s like an eye chart, huh? All those letters! There's no secret, I wanted to do it, it’s that simple. I got into wrestling really young. I came across it on TV, when I was seven or eight years old and I saw it in person for the first time, the old WWF. I was just “Wow, look at these cartoon characters! Living, breathing in the flesh, I want to be one of them.” I just knew right away and I got involved a few years after that.

My parents were divorced right after I was born. My Mother started dating a gentleman who was friends with a wrestler. I got involved as a teenager with setting up the rings and just couldn't wait to get into it. Right out of high school I went right into the training camp and broke into it man, full bore.

One of the most iconic periods of your career was in legendary hardcore promotion ECW. What was it like to perform for the most notorious crowds in wrestling at that time?

I was in WCW before that for three years. That was quite the different kind of wrestling to go from WCW to ECW. I'd never seen anything like that. I used to watch it on TV when I was in WCW thinking, “Man, this stuff's unbelievable. But I'll never go there.” Because of the chairs and the blood and all that stuff.

But man, when the opportunity came up for me to go there, the fans appreciated me right off the bat. I had a great time wrestling there and made a lot of really good friends that I still have to this day. So even though it wasn't a long run, it was about a year. Man, I really got a lot out of that persona wise and just friend wise. So I'm really glad I got a chance to wrestle there.

Coming back to WCW, the years that you were there were years of growth and change for the company. It was an exciting time for WCW. What was it like being part of the roster and watching WCW transform?

That was the boom period for the company and for me to be 20 to 23 years old to be in the middle of that, with all these legends that I idolised as a kid. I'm wrestling them on live TV, doing ratings that were bigger than the WWF. It was surreal to be in these NBA arenas and wrestling in front of these unbelievable crowds with Hulk Hogan and the Macho Man. The guys that I grew up watching and I couldn't believe I was in there with them. You know what I mean? It was a dream and that became reality. 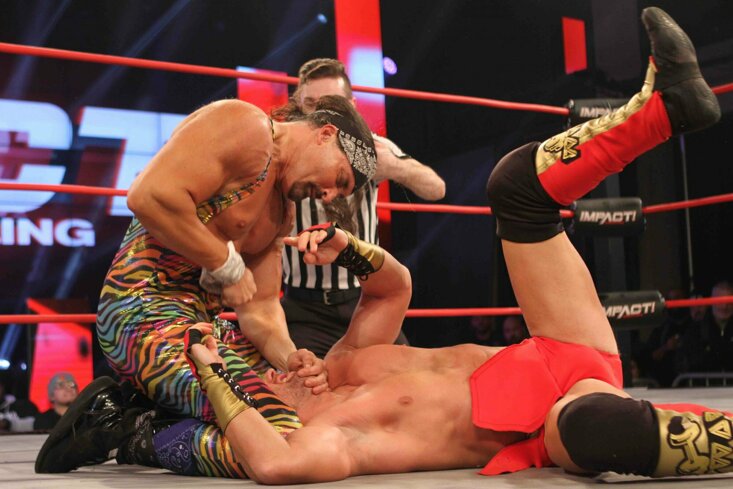 What were those veteran performers like Hogan and Savage like for giving advice? Did you learn a lot from working with WCW’s roster of big names?

I was too shy to go up to them. So what I would do is stay at a distance. They didn't know that I was listening to them. They didn't know that I was watching them on the monitor and listening to the instructions that were given. That's how I learned, kind of just by being there, I never had to go up to anyone personally and say, “Hey, did you watch my match? What do you think?”.

Because at that time, it was more if you did something wrong, they would let you know. If they didn't tell you then that meant you did a good job. That's kind of how it was back then, we didn't have the internet really to where you could go on there and see what the fans thought. You just knew by their reaction at the show if they're into the match and then come to the back. No one says anything or someone gives a thumbs up. You just went home and went “Okay, that was a good one. Let's see how tomorrow goes.”

Terry Taylor's a guy that took an extra liking to me at the time and would give me advice, mostly when I would make a mistake in the ring. He was one of the people that would pull me aside and say,”Here's what you did and here's how you can do it better.” So there was him and a few other people, but mostly you just kept your eyes open.

I'm going to take you forward just a little bit in time now to 2001, which was a scary year for the wrestling industry. ECW and WCW both went out of business. What was it like as a wrestler to see two of the three biggest American promotions go under?

That two year period from 2001 to 2003 was the hardest of my entire wrestling career. I had already gotten a taste of the big time and knew what it was all about. Then seeing two thirds of the opportunities, there’s only three opportunities and two of them have evaporated. It was a serious time for me to think that this might be the end of it for me. Or maybe it's just going to be part-time going forward. I'm going to have to develop another skill to live like an adult man and support myself.

But I got some internationals, I did some European tours, I was able to come over there and got hooked up with the WWA. World Wrestling Allstars were running some tours over there. Then eventually I got involved with TNA. But that was the hardest period because there was just nowhere to go.There was so much talent to choose from that the WWF couldn't take everybody. Even when TNA first started, they had a lot of people so they couldn't take everybody. It was rough.

You're in quite a unique position as there's only a handful of people that can say what early TNA was like and what Impact Wrestling is like in 2022. How do those early days in TNA compare to what Impact represents today?

It was a great opportunity for me and Simon Diamond to pick up where we left off in ECW. We were at the right time in the right place and they needed a team. We went in with America's Most Wanted and had some great matches. You could see that the company had a lot of similarities to ECW, where we were working as a team to try to make the company bigger so that we could all make more money. It was a real business, it wasn't like you weren't just trying to entertain whoever was the booker at the time. We were really trying to make business. So it was very similar.

It's the only place that I've ever gone back to, it’s where I'm at now. It's still kind of the same format where everybody wants to see everybody do good, because the company as a whole, we all benefit. It's just a lot of new, young, hungry people. I remember what that was like, because that was what it was like for me back then. So I appreciate that.

You touched upon him there, Simon Diamond. You guys were a tag team for a decade. Do you have any favourite memories of your time teaming with Simon Diamond?

Probably the title win. Before ECW went out of business, we were in line for that. We were really moving up to the top of the card. We were able to go to TNA and continue that and actually achieve that. He has been a great friend to me. He was in my wedding party, the godfather to one of my kids and to this day, we're still great friends. We just always worked well together and we're great friends. 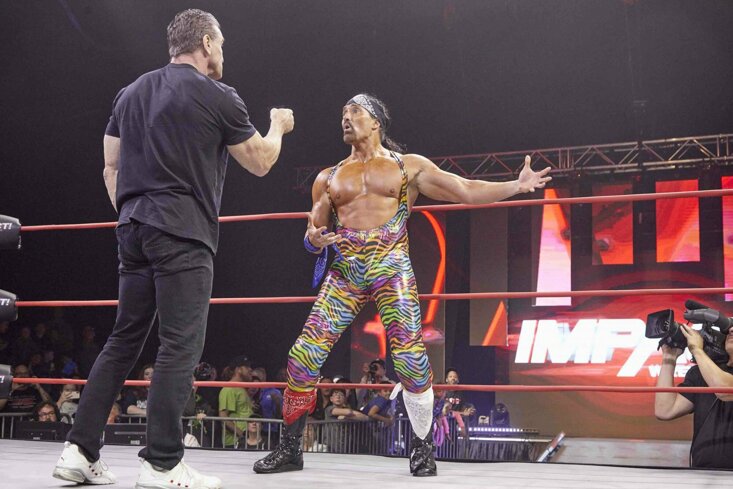 Your current character is an homage to old-school eighties professional wrestling. You’ve spoken about the wrestling you grew up with, how did you decide to weave some of that into your own character?

That's how it was presented to me. Scott D’Amore called me and pitched it to me. He basically said “You're Honky Tonk Man, but you think you're Ricky Morton.” That's all I had, everything else is inside of me. I've had all these experiences as a kid growing up. I didn't just emulate what the guys did and said on TV in front of the camera. I was also around them backstage and in cars with them. The banter back and forth between some of these guys, if you had it on film today, it would draw ratings.

The thing that I remember the most about being a kid was that they always made me laugh, the bad guys were funny. They're entertaining, colourful and just off the wall. I had it all inside of me and I just let it all out. We have great producers there that understand the character and Robert Evans and Jimmy Jacobs are writers and producers for us. They're just in tune with what I'm doing. They're just behind me and it comes across really well on TV.

The scenarios and stories you’re in are hilarious. Do you sometimes struggle to get through segments without cracking up?

When there is screw ups we can just use it because that character just screws up. That’s the character. You can’t do any wrong when you're The Swingman because the people expect you to be a bumbling buffoon, You just throw in  some old “Me and Dickie Slater, we cleared out this bar in Shreveport.” You know what I mean? It's just where that comes from. It's funny to the people that know it and to people that don't know it, it sounds funny. This guy's just the clown.

To bring it full circle, you had an impromptu ECW reunion during the Call Your Shot battle royal at Bound For Glory recently. You were joined in the ring by Bully Ray, Rhyno and Tommy Dreamer who eliminated you from the match in an incredibly memorable moment. What was it like to reunite like that on the big stage?

I'm telling you 20 years from now, I'm going to remember that 10 or 20 seconds in that match. It  became a really big thing while we were in the ring. I think Bubba Ray Dudley was legitimately surprised at the crowd reaction. That’s one of those things that I'll always remember. We're having a good time here and the people are really appreciating it. It's hard to make that up or create that. It's just one of those things that happens and people like it and they remember. It was definitely one of my highlights for sure going forward.

Check out the Impact Wrestling YouTube channel and Impact Plus for all the latest shows, moments and matches from Impact Wrestling. Enjoy full television episodes, classic pay-per-views and more.