Super Bowl LV is keenly poised, with the hype machine overloading on the narrative of Tom Brady vs Patrick Mahomes, the most successful quarterback of all time against the most exciting player in the league. Mahomes and the Chiefs are looking for back-to-back Super Bowl wins. The last quarterback to achieve that? Brady, with the Patriots over a decade ago.

Brady is in his 10th Super Bowl of a remarkable career but it’s his first outside of New England. Yet again, he has silenced the doubters, who, even for much of this season, were sceptical that his new adventure in Tampa Bay would amount to much. At 7-5, after a 27-24 loss to the Chiefs, the Bucs were in danger of imploding despite all the talent assembled. Brady was done, they said. His deep ball gone, the offense he was marshalling sluggish and lumbering compared to the next generation razzle dazzle on view elsewhere.

But under pressure, being written off, is where Brady typically thrives. In college, he landed in Michigan as the seventh quarterback on the depth chart and worked his way up to starter. He was the 199th player selected in the 2000 Draft; six quarterbacks taken ahead of him. Starting in New England as a back-up, injury to Drew Bledsoe gave Brady an opportunity and he never looked back. 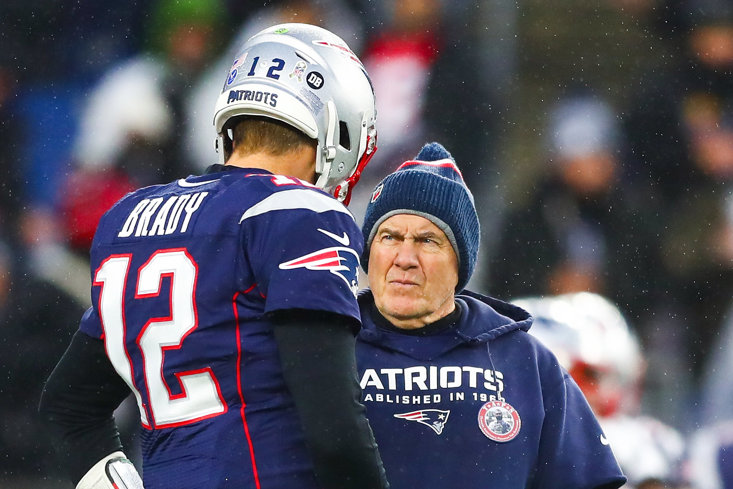 MANY WONDERED ALOUD WHETHER BRADY COULD BE SUCCESSFUL WITHOUT BELICHICK

But despite the continued success – something that just shouldn’t happen in the NFL, a league built around establishing parity, an egalitarian model helps out the weakest teams through the Draft process and ensures teams don’t buy their way to a title through the salary cap – the critics persevered. He’s just a system quarterback, they suggested, implying others would have similar success if dropped into most successful franchise the NFL has ever seen. Sure, he’s a good player, but can he win without Bill Belichick?

After the defeat to the Chiefs earlier in the season, Tampa Bay have won seven straight, including road playoff wins against New Orleans and Green Bay, two of the strongest teams in the conference.

Brady’s offense has been humming for much of that run. The all-star cast around him includes number-one receiver Mike Evans, amongst the most dangerous big-play threats in the league, supported by one of the best slot receivers in the game, Chris Godwin. Scotty Miller, a younger receiver, plays more of a supporting role but, like Evans, he is capable of breaking games up, as he proved in the Conference Championship win over Aaron Rodgers and the Packers, his TD just before half-time proving pivotal.

Rob ‘Gronk’ Gronkowski, a future Hall of Famer, and Brady’s long-standing tag-team partner for much of his latter success in Foxborough, was lured out of retirement for one last dance, and whilst he’s not the player he was, he has still contributed, particularly with his blocking capabilities. Antonio Brown is the most intriguing of all the talent assembled around Brady – a hugely-talented receiver who’s had significant off-field issues, his career collapsing. Brady, who tried to rehabilitate Brown in New England, convinced his new bosses to roll the dice  on the troubled receiver again, and Brown, who joined the team mid-season, has got stronger and stronger as the weeks have gone by. He’s an injury doubt for Sunday but is expected to play. His presence could prove to be crucial and Brady trusts and likes him, and may look to him a lot in a game of this magnitude. 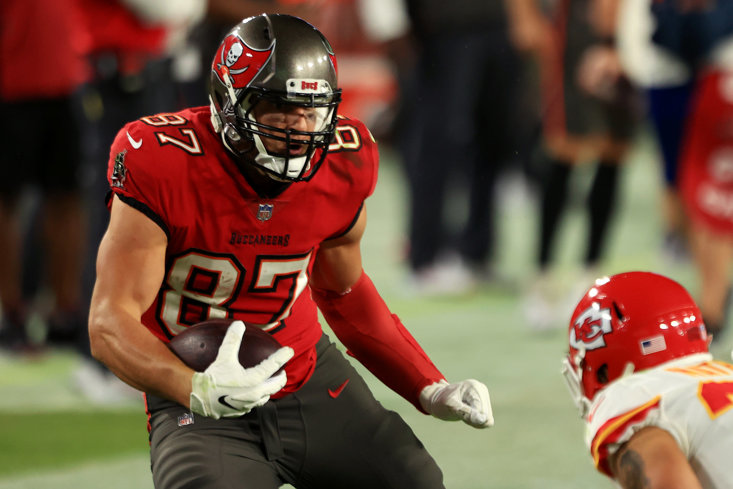 GRONKOWSKI WAS COAXED OUT OF RETIREMENT BY THE BUCS

The ground game of Ronald Jones and Leonard Fournette will be pivotal too. Fournette, another reclamation project, bounced out of Jacksonville and arrived in Tampa Bay ego bruised, written off. The Bucs will need to establish both their backs to have a fighting chance. Outside of the obvious productivity the tandem can establish on early downs against a Chiefs defence that is susceptible to the run, they’ll also help to set up the play action pass for Brady which has been highly effective this season.

Furthermore, the Bucs will want to build long, clock-eating drives, to keep Mahomes and the red-hot Chiefs offense off the field. So, if either Jones or Fournette, or both, have big days, the Bucs have a strong chance.

But even Brady would contend that it’s been the Bucs defence that has been instrumental in their path to the Super Bowl, playing with voracious intensity. Against Green Bay, Rodgers, in an MVP-level season, was under fire throughout, sacked five times and never truly able to settle.

Tampa Bay’s D has pace and is able to get cut through and pressure on the quarterback with a four-man rush, meaning it can leave strength in depth elsewhere on the field. These two things are essential when playing Mahomes and the Chiefs. Kansas City always pose a deep ball threat, with the cannon arm of Mahomes, and the presence of Tyreek Hill, a burner that can blow the lid of defences and typically needs double coverage. 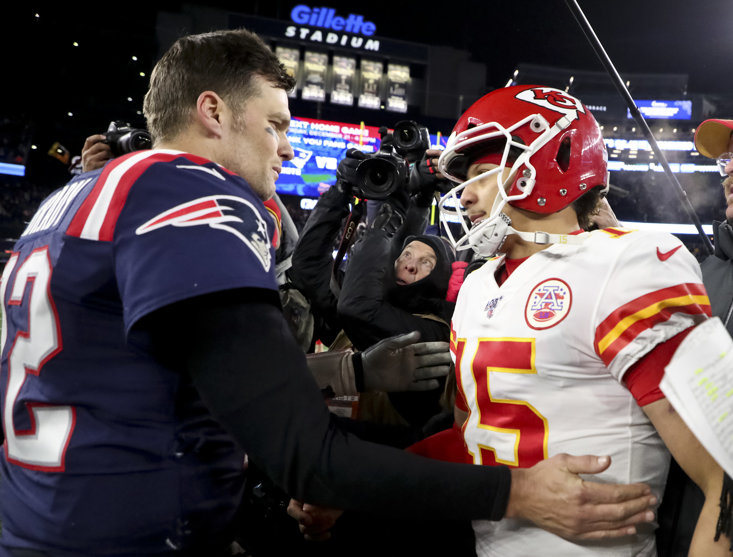 Travis Kelce is the most effective tight end in the game, ostensibly a number one WR but at 260lbs doubling down with blocking ability that is fundamental to the offensive rhythm of the Chiefs. Kelce typically makes his money on underneath routes – short and mid-level in the middle of the field, and the pace of the Bucs defence will be tested here.

As indeed it will by Sammy Watkins & Mecole Hardman a supporting duo that would be the standout offensive players on many other teams in the league. Their ground game is stronger year on year too - Clyde Edwards-Helaire, a strong and powerful runner, picked up over 800 yards in an injury-hit season and has settled into the NFL comfortably in his rookie season.

Mahomes is fearless, trying things most other quarterbacks wouldn’t attempt, and so the Brady intimidation factor narrative is a non-starter. He can turn games in an instant – a deep strike, or using rushing ability to extend plays, find a first down by improvising. He’s proved on many occasions – including last year’s Super Bowl – that he can come from behind time and again, and whilst Brady has the greatest Super Bowl comeback in history in his locker amongst all the other accolades, it’ll be crucial for the Bucs to start strongly and not let Mahomes build up a big lead early.

If that happens, they’ll have to move away from the ground game, and I’m not sure they’ll have the range to keep up. I write this, wholly aware that in doing so, I’ve joined that dangerous band of Brady sceptics. And most of the time, he has the last laugh.

The Nat Coombs Show, in association with BetFred, has been building up to the Super Bowl with terrific guests including the BBC's Jason Bell, 2 time Super Bowl winner Rob Ninkovich, and footballers Asmir Begovic and Darren Bent. Listen and subscribe here.