Rugby League
News
Victor Radley tells The Sportsman how Shaun Wane’s side can upset the odds in the most competitive World Cup that rugby league has ever seen
George Riley
12:00, 05 Oct 2022

“We’re going to go win the World Cup. That’s the plan. My first phone call with Waney he told me that. That’s when I knew I’d made the right decision.”

He’s the NRL enforcer who has chosen England over Australia.

And as he prepares for the experience of a lifetime, Victor Radley has been telling The Sportsman how Shaun Wane’s side can upset the odds in the most competitive World Cup that rugby league has ever seen.

The 24-year old Sydney Roosters forward was the headline inclusion in Wane’s squad after he turned his back on State of Origin in the summer to realise a dream for England.

A powerful, aggressive competitor, Radley qualifies through his English dad Nigel, a Sheffield Wednesday fan he describes as “pretty simple.”

“When I told him he didn’t even bat an eyelid,” Radley explains at England’s Robin Park training base in Wigan this week. The NRL ace was the big attraction, as he trained with his new team-mates before confidently wooing the British press for the first time.

To represent England at this tournament was not just the kind of ill-judged sideways step that saw Sam Burgess arrive in rugby union with perfect timing for their World Cup, before retreating almost immediately to his code of choice.

Radley has removed any chance of playing Origin or Kangaroos football, and as such this was a sizeable decision, although his Roosters coach Trent Robinson described it slightly differently.

“Robbo said to me ‘It’s marriage, it’s not a girlfriend thing.’ So I sat on it a few months and that feeling of wanting to play for England never faded away. So I went with my gut and my chest and I’m stoked with the decision.

“My head was saying I could have a chance of playing Origin but I had a feeling in my chest I couldn’t look away from. I thought there must be just generations of Yorkshire blood that just came out and I decided to go for it.

“I love Australia. I love everything about it and love living there. But sometimes you get that feeling in your chest. I’m not a big believer in stuff but there must be Yorkshire blood in me to give me that feeling I had to go with it.” 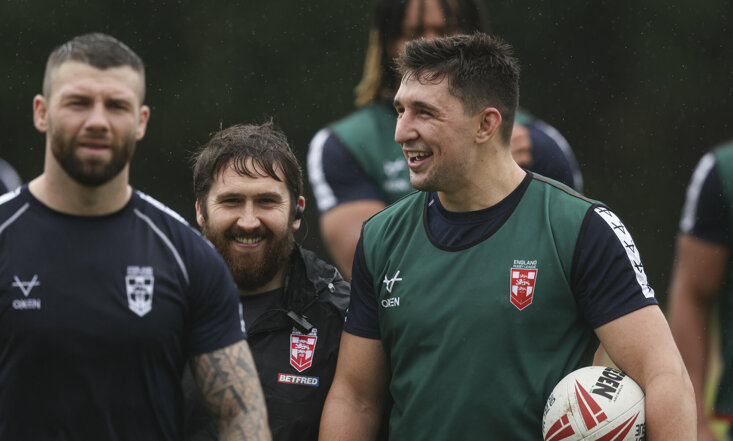 Radley was born in Sydney and won Grand Finals with the Roosters in both 2018 and 2019. He was an unmissable presence in this week’s early England training sessions. You can sense his excitement even going through new plays with his new mates. And you can sense Radley will raise the levels of those around him.

“I love my new team-mates,” he told The Sportsman, describing arriving in camp as like the first day at school.

“I don’t really get nervous, but on the flight over I was a bit. I had 24 hours on the flight by myself to think about it but as soon as I met them I knew exactly what they were going to be like.

“They are funny and everyone takes the piss out of each other and that’s what I’m about so it’s great.”

A recall to the England set up for veteran winger Ryan Hall - the nation’s top try scorer - has helped Radley fit in.

A former Sydney Rooster himself, Hall played a part in the decision to opt for England over the Kangaroos.

“I rang Hally when I was thinking about coming and he obviously said I’d love it.

“We were pretty close back in Australia so he gave me some good advice and helped me make my decision. I spent the night with him in Leeds the other night and it was good fun. He played a part in it.”

Radley earned the tag “Victor the Inflictor” as he came through the Roosters academy - “one of the lads there gave me the nickname after a game where I flogged some old dude!” he recalls. “There was a big sign at our under-20s Grand Final and I guess people just ran with it.

His style of play stuck too, suffering a series of head injuries through huge contacts, and almost as many sin binnings - twice in the same game becoming an unwelcome Radley party trick. But that brutal edge to Radley’s skillset will not, he says, be diluted for the big stage.

“Speaking to Waney, he’s a hard man so I don’t think he’ll be disappointed if I try and flog a few people.

“I’m happy he’s the coach and he’s done a big thing by letting me come into this side. I’ll be definitely learning a lot from him and can’t wait to play.”

Radley admits he is still struggling to adapt to hearing Wigan and St Helens accents rather than Sydney ones, with the calling of plays on the training pitch an unexpected early issue.

“I haven’t got all the names of the plays yet and when they were saying them fast, I was struggling a bit but I just need to get them on a sheet of paper and read them a thousand times”.

In Victor the Inflictor England have the kind of raw menace the side needs if it is to hold any hope of going toe-to-toe with the Southern Hemisphere super powers. He will start at loose forward and it is up to Radley to stay there, and channel that intensity positively to power his nation on.

England play Fiji in a warm-up game this Friday before next weekend’s World Cup opener against Samoa.