It’s been a tremendous few days in the NBA and this week’s conference finals, which start on Tuesday night, have a lot to live up to after the elimination of both of last year’s finalists in dramatic fashion.

The Milwaukee Bucks were dispatched by the Boston Celtics on Sunday night, after a long series that saw the Bucks’ offensive momentum be halted by some strong defensive action from the Celtics. After a narrow first quarter, the Celtics brought the beatdown on the reigning champions and there was nothing that Mike Budenholzer’s side could do to defend. It was probably the worst game seven performance you’ll see this year, for all of about an hour.

Next on the agenda was the Dallas Mavericks hosting Phoenix Suns, the number four seed in the west against the top placed side after 82 games. Up steps Luka Doncic, who so far has been putting up post-season numbers that haven’t been seen since Michael Jordan was lifting Larry O’Briens with regularity.

The scenes at half-time said it all. Doncic laughed in the background of a well-timed camera zoom on the sombre Suns’ star man Devin Booker. The internet decided to throw in the halftime scoreline and away it went, humiliating the Suns more than Doncic and his Mavericks could on the court. 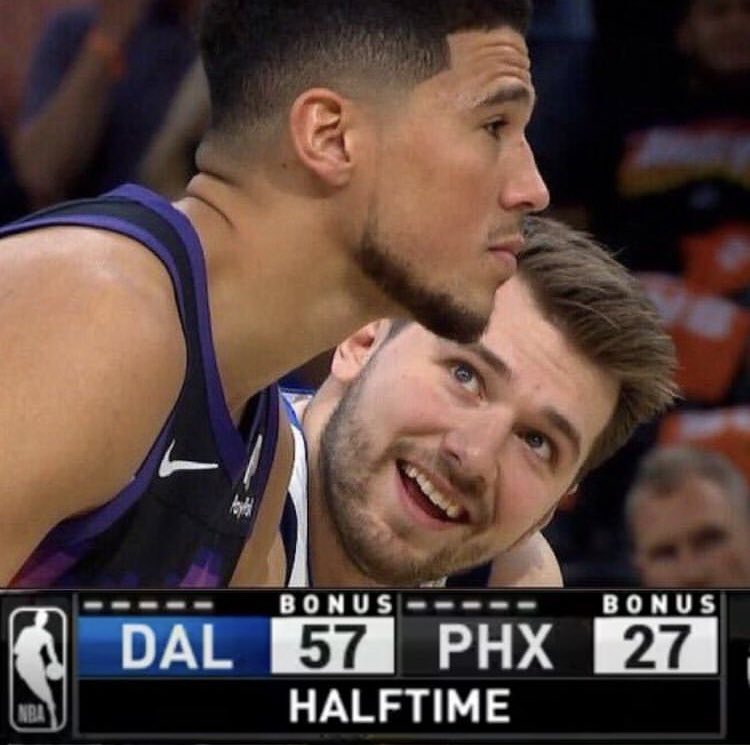 The Phoenix Suns really decided to take the heat off of Milwaukee’s plate (no pun intended, that was the Celtics), by following up their devastating loss with an even worse Game 7 performance.

The aftermath continued from both games. Milwaukee’s failure to get past Boston ups the ante on Giannis Antetokounmpo, despite him becoming the first player ever to notch 200 points, 100 rebounds and 50 assists in the same series. Rivals were quick to jump on the Bucks’ top dog, and the excuses were laid out in the form of an injured Khris Middleton.

It’s easy to blame injuries in any sport for a team’s failings. However on this occasion, it wasn’t just about how the Bucks played. The credit belongs to Celtics head coach Ime Udoka. A former disciple of the legendary five-time champion Gregg Popovich, he responded perfectly to a slow start in the first quarter, ditching his schedule of minutes for Jayson Tatum and Jaylen Brown and playing the pair together to help them get out of an offensive hole by the half-time whistle.

Using Payton Pritchard as a willing shooter instead of a more defensive-minded guard in Marcus Smart paid off, and by the time the final quarter arrived, the Bucks were all over the place, leaving plenty of easy three-point looks for the Celtics to close the game out. It was a masterstroke from Udoka, who is still in just his first year as a head coach and faces the Miami Heat in the Eastern Conference Finals this week. 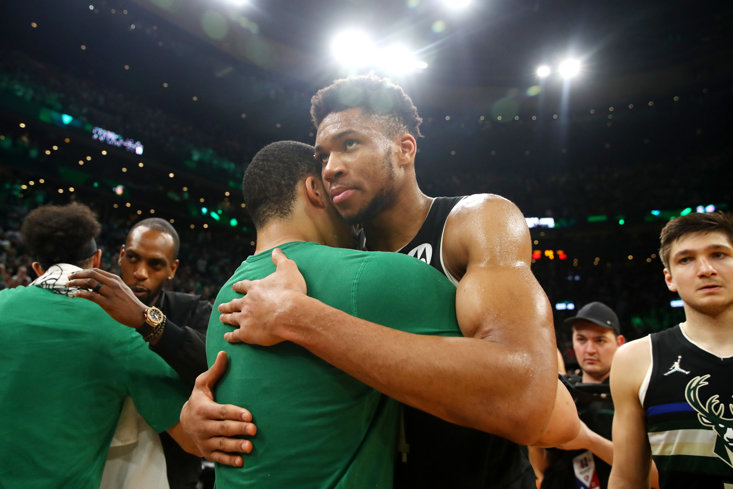 GIANNIS COULDN'T LEAD THE BUCKS PAST THE CELTICS

In the west, less could be said about coaching. Booker had an uncharacteristically poor night at the office, whether it was ‘paralysis by analysis’, or it was the curse of being with a Kardashian, we’ll have to wait and see. Booker will be thankful that he wasn’t alone on the court, as Chris Paul became the latest to receive the heat post-game.

CP3 attempted just eight shots in Game 7 when the Suns needed another offensive outlet, something he was more than capable of performing at last year, and the Point God was outdone in defence as his opposite number, Doncic, dropped 30 points and 10 rebounds on him.

Up steps Patrick Beverley, an old enemy dating back to high school days when the pair met at a Nike x Lebron James Training Camp. His victory lap to celebrate Paul’s dismal exit was broadcast live on ESPN, opposite the vociferous Stephen A Smith, and he went in hard.

He denounced CP3’s defensive ability, criticised the decision to drop Deandre Ayton instead of Paul and went as far as to say no one in the entire league is afraid of the Phoenix Suns. “He’s a cone!” was the consensus from Big Pat Bev.

Chris Paul turned 37 on the day of Game 7. One would guess that his career is probably ending in the next 24 months if he gets the opportunity to get to another playoff series. It would be a great shame to see him leave the NBA having come so close to glory without ever tasting it, having been one of the best point guards of the modern era. Although somewhere, Patrick Beverley will be laughing himself to sleep.

x
Suggested Searches:
The Sportsman
Manchester United
Liverpool
Manchester City
Premier League
More
us-sports
The Grap Wrap: McMahon Attends UFC While WWE Tease Cryptic Surprise
A WWE mystery dominated social media this week, with rampant speculation over the true meaning behind [ ... ]
us-sports
Logan Paul Signs WWE Contract As Showdown With The Miz Looms
YouTube sensation Logan Paul has signed an official contract with WWE as he continues to make strides [ ... ]
us-sports
The Grap Wrap: AEW x NJPW Forbidden Door Special Including Cesaro's...
AEW kicked open the Forbidden Door this past Sunday, and a lot of newsworthy happenings fell out. There [ ... ]
us-sports
NBA Draft 2022: The Orlando Magic Select Paolo Banchero As First...
The Orlando Magic selected Paolo Banchero as the first pick in the 2022 NBA Draft on Thursday at the [ ... ]
us-sports
The Grap Wrap: Vince McMahon Embroiled In 'Hush Money' Scandal
It’s been a bumper week of wrestling news, with the more controversial side of the squared circle [ ... ]
us-sports
Phil Jackson: The Man Who Elevated Jordan And Bryant To The...
You hear Chicago Bulls, you think Michael Jordan. You hear Los Angeles Lakers, you think Kobe Bryant. [ ... ]
us-sports
The Grap Wrap: Bray Wyatt To Return? MJF's Flight Drama And...
Good morning grapple fans, and welcome to a new semi-regular professional wrestling column from The [ ... ]
us-sports
Colin Kaepernick, The NFL Star Rather Than Activist, Might Be...
Google Colin Kaepernick. There he is, the ‘American activist’. Check out Wikipedia. Oh yes, [ ... ]
us-sports
On This Day 20 Years Ago, The British Bulldog Davey Boy Smith...
On 18th May 2002, ‘British Bulldog’ Davey Boy Smith passed away from a heart attack at the [ ... ]
us-sports
Ric Flair Returns At 73: The Nature Boy Will Walk That Aisle...
“To be the man, you gotta beat the man!” ‘Nature Boy’ Ric Flair has uttered [ ... ]
us-sports
There Are Storylines Everywhere You Look In The NFL's Week 1...
Something the NFL seem to be willing to do is make their sport a spectacle through their own power. [ ... ]
us-sports
Chuck Daly: 'Daddy Rich' Tamed Rodman, Bagged Isiah His Rings...
Entering a debate on the greatest sports sides in history should inevitably reach a particular conclusion. Avoiding [ ... ]
us-sports
'We Want RK-Bro! We Want The Usos!': No One Is Safe From Sasha...
When WWE Women’s Tag Team champions Sasha Banks and Naomi first joined WWE, the landscape was [ ... ]
us-sports
Everything You Need To Know About WWE WrestleMania Backlash
The wait ends this weekend, as WWE returns with their first Premium Live Event since WrestleMania. This [ ... ]
us-sports
The Crazy Times Of Kareem Abdul-Jabbar, The NBA All-Star Who...
This article first appeared in The Sportsman on 05/05/20 Being the number one draft pick in the NBA [ ... ]
us-sports
Blood Brothers: Randy Orton And Riddle Talk Chemistry, Growing...
The old adage dictates that opposites attract, and on the face of it that certainly seems true of RK-Bro. [ ... ]
us-sports
The NFL’s Best Trades and Free Agency Signings So Far
It’s the same every year. Almost as soon as the Vince Lombardi Trophy is awarded, attention turns [ ... ]
us-sports
Impact Wrestling's D'Lo Brown: We Didn't Open The Forbidden...
It is such an overused phrase that it has become cliched, but Impact Wrestling’s D’Lo Brown [ ... ]
us-sports
How ‘The Last Dance’ Brought Michael Jordan's Chicago Bulls...
It's now been 26 years since the Chicago Bulls ended the NBA season with a record of 72 wins and [ ... ]
us-sports
On This Day In 2018: WWE Icon Bruno Sammartino Passes Away
There have been 30 WWE Championship reigns in the last 2,803 days. In the 2,803 days between 17th May [ ... ]
us-sports
Why Jackie Robinson Day Means As Much Today As It Ever Has
Across Major League Baseball on Friday, number 42 will pitch to number 42. Number 42 will field the [ ... ]
us-sports
Frank Vogel Out: Who’s Next In The Hot Seat For The LA Lakers?
Head Coach Frank Vogel has paid the price for the Los Angeles Lakers’ poor campaign, as they failed [ ... ]
us-sports
British Invasion: WWE Announces Its First UK Stadium Show In...
WWE will host their first UK stadium show in 30 years this summer, with the American sports entertainment [ ... ]
us-sports
Giannis, Embiid Or Jokic: The Wide Open Race To NBA Most Valuable...
The race to become the NBA’s regular season MVP has never been tighter. Giannis Antetoukoumpo [ ... ]
us-sports
One Champ To Rule Them All: Lesnar Takes On Reigns On WrestleMania...
We are halfway through WrestleMania weekend, and now that you’ve finally processed what happened [ ... ]
us-sports
WWE’s Combat Sport Crossovers Have Given Us WrestleMania Moments...
This weekend, two former UFC Champions will headline WWE’s most marquee of events, WrestleMania. [ ... ]
us-sports
Return of the Rattlesnake: Stone Cold Leads WrestleMania Saturday
WrestleMania 38 is almost here, as WWE prepares to stage its biggest shows of the year. Nowadays, the [ ... ]
us-sports
The Show of Shows: The Best Match From Every Single WrestleMania
WrestleMania weekend is upon us, as WWE prepares to stage the 38th edition of the biggest event in professional [ ... ]
us-sports
The Lion and The Hyena: 25 Years On From The Most Important...
“These people are standing, can you imagine the pain that is racing through Austin’s body? [ ... ]
us-sports
Stone Cold Steve Austin Accepts Kevin Owens' WWE WrestleMania...
“Whether you want to call this ‘The KO Show’, a match, a fight, a brawl. Whatever. [ ... ]