Rugby League
News
We were treated to a fine weekend of rugby league in Newcastle
George Riley
06:55, 12 Jul 2022

Magic Weekend, and in particular a stunning Saturday, delivered rugby league just the shot in the arm it needed 100 days from a home World Cup.

Critics, including this writer, have questioned whether there remains an appetite and place for the concept in a fixture calendar poised for regeneration over the coming seasons, but players and fans alike delivered an encouraging answer over two sweltering days at St James’ Park. It looked good, it sounded good and it produced bags of atmospheric drama. I was left telling myself this is what rugby league used to be like. And how it should be.

Granted there were aspects to knock for those wanting to.

Sunday’s attendance of 25,333 was the lowest gate for a day at Magic in 15 years since its inception. And ardent supporters of international rugby league may still feel that in World Cup year the calendar would have been better off foregoing a Magic Weekend to give the home nations extra time in camp.

Furthermore, at a time where finances have become globally strained, it cannot just be assumed that fans will be able to turn up for these events, with Cup Finals, playoffs, Grand Finals and the end of season international showpiece to factor in.

Yet few will have left Newcastle thinking it was not money well spent.

Saturday produced stunning wins for Toulouse and St Helens at opposite ends of the Betfred Super League table, before a derby win for Leeds lit up by the presence of their treasured son Rob Burrow.

The French side knew they had to beat Wakefield to hold any hope of catching their closest relegation rivals. A 26-4 half-time deficit effectively had Olympique heading back down to the Betfred Championship before the most stunning purple patch that Magic Weekend has ever seen. Five tries in a quarter of an hour after the break secured a victory that gives real hope to the great Toulouse escape.

St Helens coach Kristian Woolf told The Sportsman last week that rivals Wigan were far closer to catching the champions than they have been claiming. A stunning late Saints win therefore represented a huge muscle flex by the league leaders, with the Warriors now looking over their shoulders at Huddersfield and Catalans.

The Dragons would have fancied making inroads on the top two but suffered a shock defeat to a resurgent Warrington. Wolves boss Daryl Powell gave The Sportsman a fascinating insight into his psyche before the game and his players appeared to thrive on neutral ground away from their frustrated home support. England’s George Williams inspired a win with a performance underlining why England coach Shaun Wane is keeping faith in his scrum half to rediscover top form. 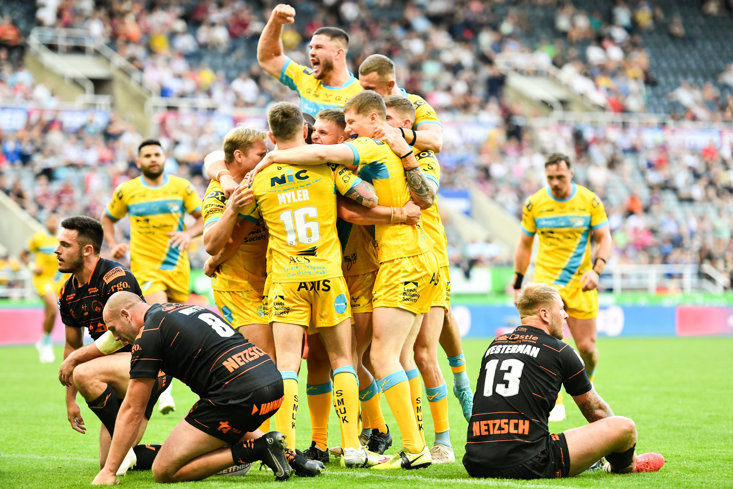 Leeds outclassed Castleford in their derby which showed both a slicker attacking game (running and scoring on last tackles) that is blossoming under Rohan Smith, but the same indiscipline that has been a straight jacket on their progress.

Matt Prior’s two-match ban means Leeds have four props currently suspended. It’s his third ban this year alone, and the Rhinos 18th suspension. Yet it feels incredible to say that they suddenly look to have a really good shot at making the playoffs.

Hull and Huddersfield were the weekend’s other winners - Hull in a derby classic over Hull KR who had Danny McGuire in temporary charge. The Giants’ win over Salford was as routine as they come, another sign of their immense progress under Ian Watson whose new contract until 2026 looks like the signing of the season.

The man in charge of his former club, the Salford boss Paul Rowley, summed up the difference between the two sides perfectly.

So what and where next for Magic Weekend?

Newcastle looks to have established itself as the event’s spiritual home, due largely to a central location in a passionate sporting city that gives the concept of staging an entire round or fixtures at one venue exactly the platform it needs.

So assuming that IMG, Super League and the RFL agree that Magic is worth continuing with, and that St James’ Park has proved the most fitting host over predecessors Manchester City, Anfield, Cardiff and Edinburgh, then it is a case of agreeing when to do it. Newcastle will need to sign that one off, but most would want a similarly sunny July day, given that the Betfred Challenge Cup Final now dominates May.

Such a place in the calendar provides an obvious platform for the season run-in, and don’t be surprised to see a few results strung together now by those who shone at Magic, something that Warrington and Leeds fans will be craving as they chase down the playoffs, while Toulouse will hope their stunning success ignites an heroic great escape.